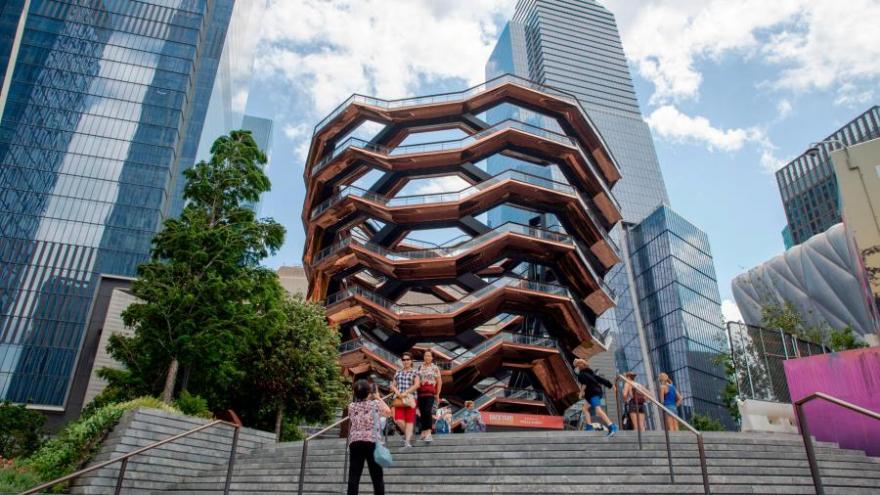 Vessel, a tourist attraction in New York City's Hudson Yards neighborhood, has been closed to visitors since a suicide on July 29.

(CNN) -- In a December 2016 article for The Architect's Newspaper, journalist Audrey Wachs noted a glaring issue with the Vessel, the 150-foot-tall tourist attraction that was set to open in New York City's gleaming new Hudson Yards neighborhood.

"As one climbs up Vessel, the railings stay just above waist height all the way up to the structure's top," she wrote, "but when you build high, folks will jump."

That warning has proved tragically prescient. Last week, a 14-year-old died by suicide at the climbable structure -- the fourth such fatal incident since the landmark opened to the public in March 2019.

"We are heartbroken by this tragedy and our thoughts are with the family of the young person who lost their life," Hudson Yards spokesperson Kimberly Winston said in a statement. "We are conducting a full investigation. The Vessel is currently closed."

It's the second time the Vessel has closed due to suicides. In January, after the third death, the Vessel closed for several months and reopened in May with new safety measures in place, including increased security, a buddy system and signs about mental health resources.

Now, the Vessel's future as the Instagrammable centerpiece of the largest development in Manhattan since Rockefeller Center is in limbo. Can it be saved?

Its corporate backers will certainly try. Heatherwick Studio, which designed the Vessel, said in a statement it was working with Related Companies, the real estate firm run by billionaire Stephen M. Ross, on finding "physical" solutions to the issue.

"Working with our partners at Related, the team exhaustively explored physical solutions that would increase safety and they require further rigorous tests, and while we have not identified one yet, we continue to work to identify a solution that is feasible in terms of engineering and installation," the studio's spokesperson said.

Raising the barriers several feet higher would be one such solution. Indeed, physical barriers or netting have long been used to try to prevent such tragedies at high-standing structures. The Golden Gate Bridge in California, where more than a thousand people have died by suicide over the years, is installing nets to minimize fatal injuries; the George Washington Bridge did something similar several years ago.

Still, adding a simple physical barrier or net addresses only part of the Vessel's problem.

The central point of architecture and design is that the constructed environment influences how we feel and act. And the Vessel -- surrounded on all sides by concrete, glass skyscrapers and crass commercialism -- has a more fundamental issue, according to Jacob Alspector, a distinguished lecturer at the Spitzer School of Architecture at The City College of New York.

"The Vessel is like some MC Escher nightmare," he said, referring to the famed graphic artist known for his staircases to nowhere. "It's kind of relentless. It's very gaudy, it's very cold. It's thrilling ... It's not the most friendly and life-affirming and inclusive kind of space or structure. It's kind of empty. What's the point of it? Just to walk up and walk down?"

He added: "People who feel alienated with the world may not be supported very well by an experience like that."

How architects and designers try to prevent suicides

More than a decade ago, he oversaw the renovations of New York University's Bobst Library, less than two miles from where the Vessel sits, which had a similar problem.

In 2003, two students jumped to their death in the library's open atrium. The school then installed an 8-foot-tall plexiglass barrier to prevent such incidents, but another student managed to climb over that barrier and jump to his death in 2009. NYU wanted to solve the problem once and for all.

The solution, debuted in 2012, was the Bobst Pixel Veil -- a series of laser-cut aluminum panels that enclosed the space but also allowed sunlight to shine through in an intricate pattern.

"It's an example of making something a positive thing rather than a barrier thing," Alspector told CNN. "The trick is to transform something to make it seem like you're not in a cage."

Wachs, the journalist who warned about the Vessel in 2016, specifically cited the deaths at the library as an example of what might go wrong. Stephen Ross and Heatherwick, she wrote at the time, "seem not to have learned from Bobst, or from the city's bridges and iconic tall buildings."

Toronto's Bloor Viaduct provides another relevant example of one possible solution. Hundreds of people had died by suicide at the viaduct, so local leaders in 2003 commissioned the installation of the Luminous Veil -- a barrier made up of thin, steel rods that also light up in bright colors.

"It is designed both as a deterrent to suicide, and as a kinesthetic field of reflection," according to architecture and design platform RVTR.

Dr. Mark Sinyor, a psychiatrist and suicide prevention expert at the Sunnybrook Health Sciences Centre, studied the impact of the barrier in 2010 and again in 2017 and uncovered an unusual result.

As expected, the Luminous Veil worked as designed and stopped suicides at the Bloor Viaduct. However, the 2010 study found that in the first few years after the barrier was installed the rate of deaths by jumping across Toronto remained unchanged, suggesting the suicides simply moved elsewhere. However, the 2017 study found that in the long-term, suicides by jumping had declined across the city with no associated increase in suicide by other means.

"When you limit people's access to lethal methods, you see fewer deaths in an area," Sinyor said. "That is because people who are suicidal ultimately can find other ways of coping if in the moment a means of death is not readily available."

Taken together, the studies show that preventing suicide is about more than just a barrier at a single location, Sinyor told CNN. In particular, he criticized the media coverage at the time that pushed the harmful myth that suicidal people aren't worth saving.

"Suicide never has to happen," he added. "It is preventable. And people who are struggling should seek help, because help is out there."

The Vessel has a deeper issue

Safe public messaging was a key part of the Vessel's plan when it reopened in May with new safety measures. Rather than making physical changes, the Vessel charged a $10 fee for entry, required people to come with another person, hired staff and security to watch for distress and set up signs informing visitors how to get help.

Last week's tragedy showed the flaw in that plan without a physical barrier. The 14-year-old victim had been with his family when he died, authorities told CNN affiliate WCBS.

Lowell Kern, the chairman of the advisory Manhattan Community Board Four, told CNN that raising the height of the barriers was the "obvious" solution.

"There is no reason to have a 4-foot high barrier that's easy for someone to get over, either impulsively or planned. In terms of aesthetic, it seems to me that's an easy solution," he said.

Related Companies did not do so, though -- and the fatal incidents since confirmed his worst fears. "I've never been so unhappy to be proven right," he said.

A higher barrier is not always necessary for an elevated platform. For example, the Guggenheim Museum also has an open area with a low barrier, but there has never been a suicide there.

"I think it's because the space is so beautiful, so magical, so affirming, so wonderful," said Alspector, the architect and professor. "I don't know that I've heard anyone describe the Vessel as beautiful."

He said he was skeptical an 8-foot-tall barrier at the Vessel would be sufficient given that it was ineffective at NYU's library. He instead suggested a continuous, enclosed barrier.

"I would urge it to be something that's humane, life-affirming, not prison-like, not like a fishbowl necessarily," he said. "It's a tough design problem."