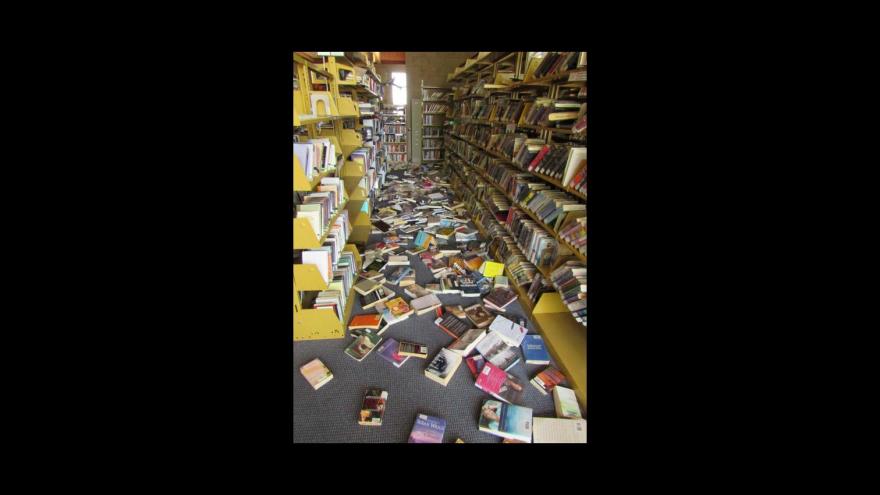 Books litter the floor of the Ridgecrest Branch Library after the earthquake hit the area. The library shared on Facebook they would be closed tomorrow to reshelve the books.

(CNN) -- An earthquake that jolted a large swath of Southern California has produced more than 1,400 aftershocks and left what looks like a "scar across the desert," scientists said Friday.

"An event like this will continue producing aftershocks for years," Cal Tech geophysicist Zach Ross said of Thursday's 6.4 magnitude earthquake.

The quake -- centered near Ridgecrest, 150 miles north of Los Angeles -- was the strongest to hit Southern California in nearly 20 years, prompting one city's mayor and later the governor to declare a state of emergency for the area.

Crews are doing an assessment over areas hit by the Searles Valley earthquake, US Geological Survey seismologist Susan Hough said. Some land was moved laterally by the quake's power, creating cracks that give the appearance of a scar, she said.

Aftershocks kept rolling across the region Friday, with one measuring 5.4 reported northeast of Ridgecrest, the USGS said.

The 5.4 aftershock was centered about 10 miles west of Searles Valley and was felt "throughout the SoCal region," the Los Angeles Fire Department reported.

Experiencing the quake was like being in a movie, Ridgecrest resident Sara Baird said.

"Everything shakes. The whole ground shakes beneath you, the whole house. Everything fell in my kitchen, it's still on the floor," Baird told CNN affiliate KABC.

"People are pretty rattled -- literally and figuratively," Kern County Communications Director Megan Person told CNN on Friday. She said the county government established a crisis hotline to support residents mental health in the wake of the earthquakes and aftershocks.

Experts said there's a 20% chance of an earthquake of magnitude 6 or higher occurring in the next week .

But a larger quake isn't as likely, the USGS said.

"While it is always possible for large quakes to trigger an even larger quake, most do not," the agency said. "It's generally not possible to determine whether a given quake will turn out to be a 'foreshock' of a larger one."

PAGER -- the USGS's system for estimating fatality and economic loss impact after earthquakes -- estimates there will be between $10 million to $100 million in losses.

The quake was felt from Las Vegas to Orange County and cities throughout California saw varying degrees of damage.

Ridgecrest Mayor Peggy Breeden declared a state of emergency, saying there were five fires and broken gas lines across the city of 28,000.

One resident, Kimberly Washburn, was directing a children's July 4th program when the building began to shake, startling the 65 children on stage, who began screaming.

"It was terrifying," she said.

One boy was injured when something fell on his foot, but Washburn said they were blessed that more weren't hurt. After they evacuated, a wall fell behind where the children had been performing, she said.

Gov. Gavin Newsom approved an emergency proclamation for the county to address the earthquake and aftershocks.

On Friday, geologists were out surveying cracks, measuring them and recording the locations. Brian Olson of the California Geological Survey said the information will prevent building from being built on fault lines.

"It's important to note that ... earthquakes don't just produce strong shaking, they can also break the surface and move it," he said.

Ridgecrest Regional Hospital is closed and could remain that way for up to a week before it's back to full services, Jim Suver, the hospital CEO and president, said Friday.

The hospital's urgent care, lab, radiology, dental, rehab and medical records units are closed, according to a Facebook post by the hospital. Most outpatient procedures are canceled.

Suver said all the hospital's 25 patients were transferred. Some patients would have been transferred regardless of Thursday's earthquake, Suver said.

The strongest quakes in Southern California

The last time Southern California saw such a forceful quake was nearly 20 years ago, when the 7.1 Hector Mine quake shook the Mojave Desert.

That quake struck in the early morning hours of October 16, 1999 and people from Southern California to Arizona and Nevada felt the tremor. But because the quake was centered in a remote region, it caused "relatively negligible damage," the Southern California Earthquake Data Center said.

In 1994, Los Angeles' San Fernando Valley was struck by a deadly 6.7 magnitude earthquake that killed at least 57 people and injured more than 7,000, according to the USGS.

"The earthquake had immense impact on people and structures because it was centered directly beneath a heavily populated and built-up urban region," the USGS said.