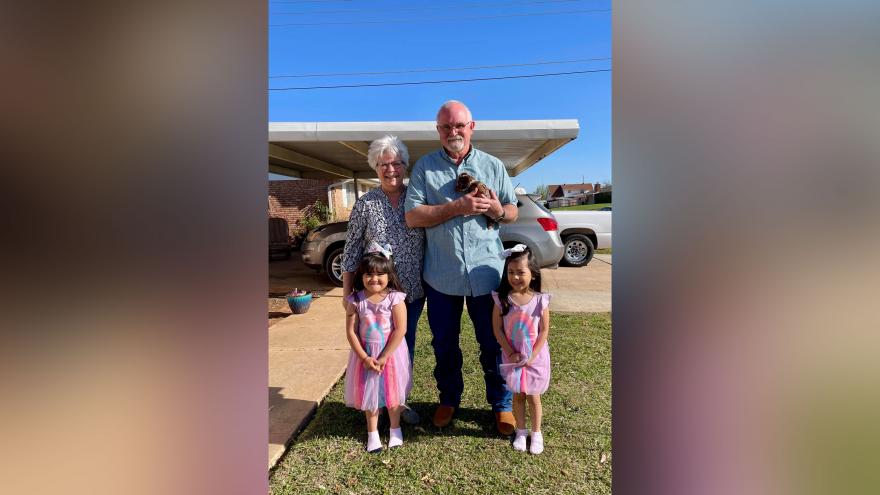 (CNN) -- Twin sisters received a late Christmas gift from a stranger almost 650 miles away after he found a holiday wish list tied to a balloon.

In December, Leticia Flores-Gonzalez had her 4-year-olds, Luna and Gianella Gonzalez, tie their lists to balloons and release them into the sky above their home in Liberal, Kansas. It was their way of reaching Santa Claus.

"It was important doing something special for my girls because of the hard year we had during the coronavirus pandemic. I wanted them to feel like 2020 was another year spent with mom making beautiful memories," Flores-Gonzalez told CNN.

"It was never with the purpose someone would find the balloon. I thought it would deflate and would just disappear somewhere in a tree nearby."

But one of those balloons did make it to a man with white facial hair -- and a big heart.

Alvin Bamburg was deer hunting in Grand Cane, Louisiana, in late December, when he spotted one of the balloons tangled in a tree.

"I saw that balloon and God spoke to me. He said, 'You need to get this, and, second of all, you need to get the trash out of the woods,' " Bamburg told CNN. "When I got it I noticed a folded yellow piece of paper sealed with a red star, and it was a Christmas list from a girl named Luna."

Luna had asked Santa to bring her candy, a Spider Man ball, a Frozen doll, a puppy, and a My Little Pony toy.

The holidays kept Bamburg and his wife, Lee Ann Leopard Bamburg, distracted, but they didn't forget about the list. In early January, Bamburg shared his discovery with family and friends on Facebook.

"Would love to know when it was launched. Looks like it traveled over 600 miles. Feel free to share," Bamburg wrote.

So many people shared the post that it eventually reached Flores-Gonzalez.

"When we found out someone actually found Luna's balloon, we were just in shock," Flores-Gonzalez said. "We couldn't believe how kind people were; we were overwhelmed with love. That's what really mattered."

Flores-Gonzalez received requests to share Gianella's list, as well. After she did, both girls began receiving gifts from Bamburg's family, friends, co-workers and even old schoolmates.

Finally, in mid-April, after months of communication, the Bamburgs drove six hours to meet Flores-Gonzalez and the twins, and give them one last present.

"We had texted, talked, and FaceTimed before we even met, and it was clear we had a connection," Bamburg said. "When we met, it was just like meeting family."

During the meeting, Bamburg presented the girls with a dachshund puppy, fulfilling Luna's Christmas wish list. The girls were overjoyed and quickly named it Max.

Together, the families shared a meal, where they laughed and bonded over shared values.

"To us, it isn't the amount of gifts or the value that the girls are receiving," Flores-Gonzalez said. "It's the love they received. It meant the world to us we see their smiles, and the lifelong friendship we have made with Alvin and his wife."

When it came time to say goodbye, both families agreed to meet again. In fact, they've already scheduled their next reunion for the end of May.

Until then, Bamburg hopes his story will inspire others to take a break from their busy lives and find a way to make someone else's day a little bit brighter.

"There's so much sadness in the world right now, the world is a freaking mess," he said. "It's really not hard to spread kindness, and you can never underestimate the impact even just a smile will have on someone's day."