After escaping an enclosure, dozens of goats get loose and run through a neighborhood in Washington state 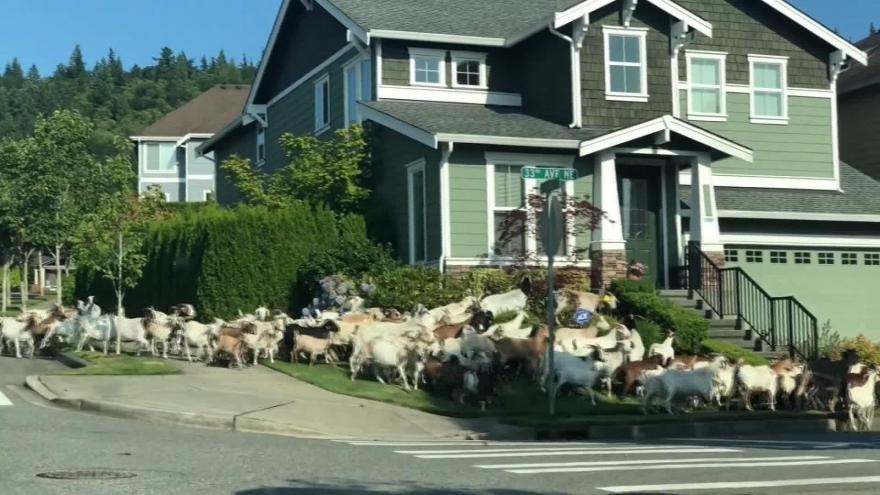 On Tuesday a community in Washington state found out what happens when goats burst out of their enclosure and run through the streets.

(CNN) -- A herd of goats can function as a great eco-friendly way to cut the grass, but sometimes they have a mind of their own.

On Tuesday a community in Washington state found out what happens when goats burst out of their enclosure and run through the streets.

Mark Svendsen posted a video as dozens of goats scampered through the Issaquah Highlands community, just east of Seattle.

He said the neighborhood homeowner's association uses the goats to control weeds and help clear vegetation between houses.

Describing the video, Svendsen wrote that the goats had just about chewed through the enclosed field, where they were being kept. But hungering for more green snacks, the herd "broke through their fencing," he said.

Of course, there was dog trotting alongside trying to herd them, but their prime objective was to get into the lush greenery outside one of the neighbor's houses.

"It took several hours and a lot of help from the community to get the various groups of the herd back together," Svendsen added.

It's not the first time in recent memory that a neighborhood has seen a surprise goat stampede.

Last August, dozens of goats were chomping on weeds near a retention pond in Boise, Idaho, when they broke through a fence and paraded through a neighborhood.

At the time, Boise resident Kyle Bryant told CNN the goat procession "was was the best thing I have seen since we moved to Boise three years ago."