After a deadly shooting rampage stuns Memphis, the suspect accused of live-streaming attack appears in court 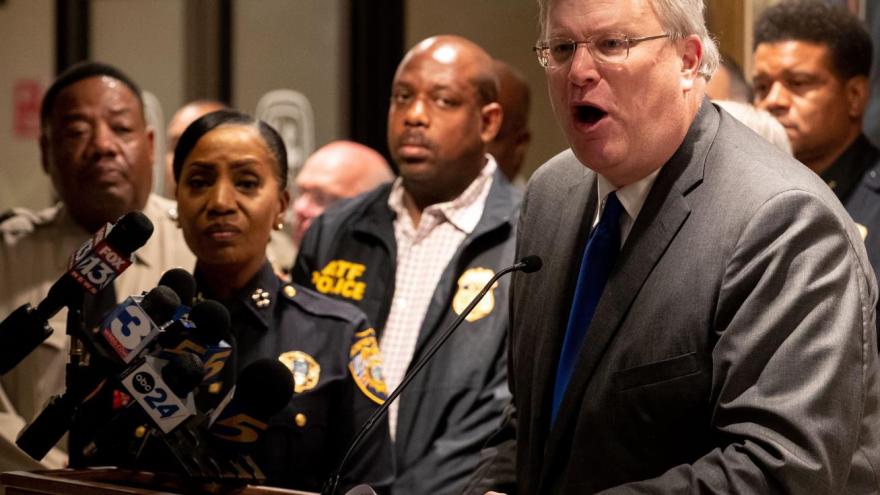 (CNN) -- Dewayne Tunstall had aspirations of running a food truck and planned to name it "EBE," inspired by the phrase he lived his life by: "Everybody eats," his friend Marcus Cash told CNN affiliate WMC.

But in the early hours of Wednesday, Tunstall was shot and killed while visiting Cash's house -- becoming the first victim in a violent shooting spree that gripped the city of Memphis until the suspect was arrested later that night.

The shooting rampage came just days after the body of Eliza Fletcher, a Memphis teacher who was kidnapped last Friday and murdered, was found. The string of deadly attacks across the city over the past week have elicited rage and fear from the city's leaders, who say the violence is unacceptable.

The shooting suspect, Ezekiel Kelly, 19, made his first appearance Friday in a Shelby County Courtroom for a first-degree murder charge.

Kelly has been charged in the killing of Tunstall, the first victim in the shooting spree. Authorities say the 1 a.m. shooting that left Tunstall dead set off a series of other shootings across the city which left three more people dead and three others injured.

Kelly, who was escorted by deputies into the courtroom, was shackled and wore navy jail clothes and a black face mask. He spoke briefly to address the judge's questions and did not enter a plea.

She set Kelly's next motion hearing for September 13. He is being held on no bond in Shelby County Jail, records show.

The citywide search for Kelly, also known as "Zeek Huncho," prompted a shelter-in-place order for part of the city and temporary suspension of bus and trolley services in the area.

Officers responded to the first afternoon shooting at 4:38 p.m. and found a man in his car with multiple gunshot wounds, police said. Minutes later, police said they found a woman at a different location with a gunshot wound to the leg.

Kelly was allegedly streaming on Facebook Live when he opened fire inside a store more than an hour later, according to Memphis Police Chief Cerelyn "C.J." Davis. When officers arrived at the scene, they found a man who had been shot and he was taken to the hospital in critical condition.

According to police, officers then responded to three more locations, where they found a man and two women who had been shot. The man was brought to a hospital in non-critical condition, Davis said, but both women died. The gunman allegedly stole an SUV from one of the women, she said.

After learning that Kelly carjacked a person at gunpoint and took off in the victim's Dodge Challenger, the car was spotted within minutes on I-55, police said. After a high-speech car chase, Kelly was arrested and two weapons were visible in the car when he was taken into custody, Davis said.

While the motive in the attacks is still unclear, the city of Memphis must now recover from the violent rampage on several of its community members.

Tunstall's friends remember him as a young father who had ambitious dreams and a generous spirit.

Memphis Mayor Jim Strickland shared his "deepest sympathy" for the victims and their loves and condemned the violent attacks in a statement Wednesday night, arguing that they could have been preventable if not for holes in the criminal justice system.

"I am angry for them, and I'm angry for our citizens who had to shelter in place for their own safety until this suspect was caught. This is no way for us to live and it is not acceptable," Strickland said.

Kelly was released from prison in March after serving 11 months of a three-year sentence for aggravated assault. He had initially faced more serious charges in a 2020 case in Shelby County, including attempted murder, reckless endangerment, and using a firearm with intent to commit a dangerous felony, court records show, but he only pleaded guilty to the lesser aggravated assault charge.

"If Mr. Kelly served his full 3-year sentence, he would still be in prison today and 4 of our fellow citizens would still be alive," Strickland said.

In his statement, the mayor urged that "these evil actions show why truth in sentencing is a must," referencing a new law in Tennessee that will require those convicted of some violent crimes to carry out their full prison sentence.

CNN has reached out to the Shelby County Public Defender for comment.