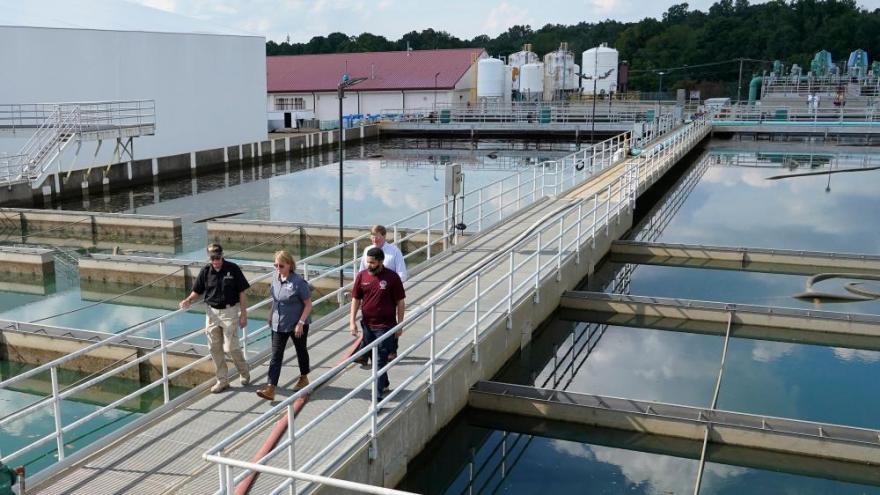 "Today, the tanks are full. Water pressure is solid," Reeves said during a Monday news conference.

In a Monday news release, the city said, "All tanks maintained storage levels overnight. We currently do not have any tanks at low levels. All of Jackson should now have pressure and most are now experiencing normal pressure."

City officials said "significant gains" in terms of water pressure were made late Friday night into Saturday at the O.B. Curtis Water Treatment Plant, increasing plant output to 86 pounds per square inch (PSI) -- close to their goal of 87 PSI.

On Sunday, water pressure levels exceeded the goal, reaching 90 PSI, and on Monday the city said the total plant output is currently meeting the goal of 87 PSI.

After flooding hit the treatment plant, thousands of Jackson residents went days without enough water to flush their toilets or enough clean running water to safely brush their teeth. Public schools had to resort to online classes when the water pressure dropped.

Schools with air conditioning systems that depend on water may experience delays in reaching the coolest possible temperatures, the system said.

Jackson residents are still under a boil-water advisory, the city said. In order to lift the advisory, officials must get two rounds of clear samples from the water, a process the city hopes to begin midweek.

Jackson, home to about 150,000 residents, had been under a boil-water advisory since July 30 due to a high "level of manganese combined with the use of lime" at the O.B. Curtis plant in nearby Ridgeland, the city said.

The main pumps at the water treatment plant were severely damaged around late July, forcing the facility to operate on smaller backup pumps, Mississippi Gov. Tate Reeves said last week. The governor did not elaborate on the damage.

FEMA leader not sure when Jackson will have safe drinking water

The head of the Federal Emergency Management Agency said Sunday it is still too soon to say when all Jackson residents will have safe, running drinking water.

"The focus right now is making sure we can get bottled water out," FEMA Administrator Deanne Criswell told CNN's Dana Bash.

The city warned "additional challenges" as repairs are made may impact the improved water pressure.

The FEMA director visited the site Friday and said it's not certain when the water plant will be fully operational again.

"There has been a lot of infrastructure damage that has been present for many years," Criswell told CNN's "State of the Union" on Sunday.

But "I think that having EPA and the Army Corps of Engineers, we had a really good conversation on Friday about what it's going to take and the assessments they're doing," Criswell said. "It's going to happen in phases."

But even when Jackson's boil-water advisory is lifted, the water treatment infrastructure will still be in a fragile state, Mayor Chokwe Antar Lumumba said told ABC's "This Week" on Sunday.

"There are many points of failure. We're talking about a set of accumulated challenges that have taken place over the better part of 30 years."

The mayor told ABC he expects a long road ahead to achieve a "safe, drinkable, reliable, sustainable and equitable" water treatment facility.

"I've been lifting up this circumstance amongst many individuals that are in leadership and have influence over a solution," Lumumba said. "I don't want to put it squarely in one person's lap, but I think there's a well-defined record of me lifting that up."

On Monday, Reeves cautioned the water system still had many problems.

"This system broke over several years and it would be inaccurate to claim it is totally solved in a matter of less than a week," Reeves said.