After 51 years, the Zodiac Killer's cipher has been solved by amateur codebreakers 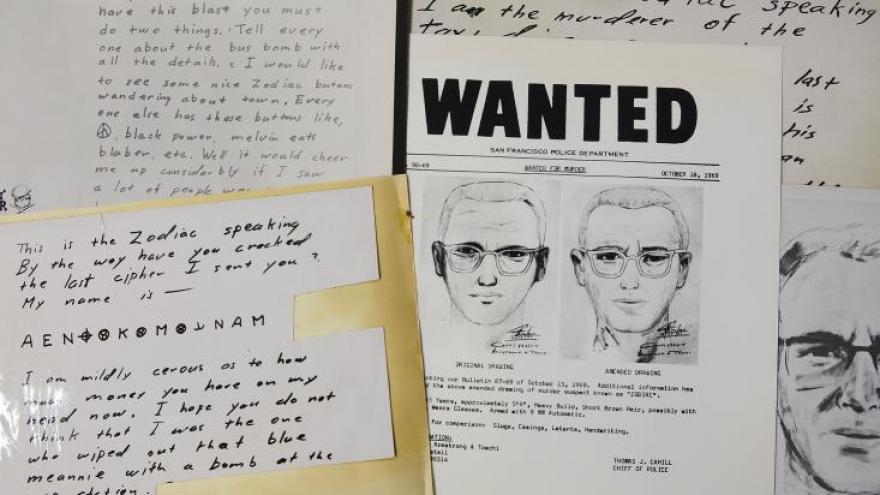 A San Francisco Police Department wanted bulletin and copies of letters sent to the San Francisco Chronicle by a man who called himself Zodiac are displayed in San Francisco. One of those letters has now been deciphered, 51 years later.

(CNN) -- More than 50 years after the so-called Zodiac Killer first began terrorizing the streets of Northern California, a code-breaking team is believed to have finally cracked one of the killer's mysterious coded messages sent to the San Francisco Chronicle in 1969.

Dubbed the "340 cipher," the message was unraveled by a trio of code breakers -- David Oranchak, a software developer in Virginia, Jarl Van Eycke, a Belgian computer programmer, and Sam Blake, an Australian mathematician.

Decoding the cipher revealed the following message. It was sent in all capital letters without punctuation and included the misspelling of paradise:

I am not afraid because I know that my new life will be an easy one in paradice death."

The TV show the message refers to is "The Jim Dunbar Show," a Bay Area television talk show. The cipher was sent two weeks after a person claiming to be the Zodiac Killer called into the show.

"It was incredible. It was a big shock, I never really thought we'd find anything because I had grown so used to failure," Oranchak, who's been working on solving the killer's messages since 2006, told CNN.

"When I first started, I used to get excited when I would see some words come through -- they were like false positives, phantoms. I had grown used to that. It was a long shot -- we didn't even really know if there was a message," he said.

The trio took their findings to the FBI a week ago, but didn't reveal their breakthrough until the FBI's confirmed cleared by the authorities, they said.

The Zodiac Killer is most known for leaving a trail of five unsolved murders between 1968 and 1969. He was never caught, but he gained notoriety by writing letters to police and local media up until 1974, sometimes in code, boasting of the killings.

Bloody bits of clothing were included with his letters as proof of his actions. He claims he killed as many as 37 people.

The FBI said in a statement that the case remains an ongoing investigation for the bureau's San Francisco office and its local law enforcement partners.

"Due to the ongoing nature of the investigation, and out of respect for the victims and their families, we will not be providing further comment at this time," the statement read.

The San Francisco Police Department has also been made aware of the solved cipher, and said the information has been sent to the department's cold case homicide investigators.

Oranchak detailed the process for cracking the cipher on his website and in a YouTube video, where he used a specifically developed decryption software and a bit of luck to finally make the connection. The team used a unique program to sift through 650,000 variations of the message. In one, a couple of words appeared.

"We got really lucky and found one that had part of the answer, but it wasn't obvious," Oranchak said, explaining that they then had to handpick their way through to decipher the rest of the message.

The only disappointing part, Oranchak said, is that the missive contained no personally identifying information.

Oranchak holds out no hope for solving the two remaining ciphers. He described the mission as "almost hopeless," as both are very short, with thousands of different names and phrases that could fit.