After 150 Amazon packages arrived at a woman's home by mistake, she decided to donate the contents to local hospitals 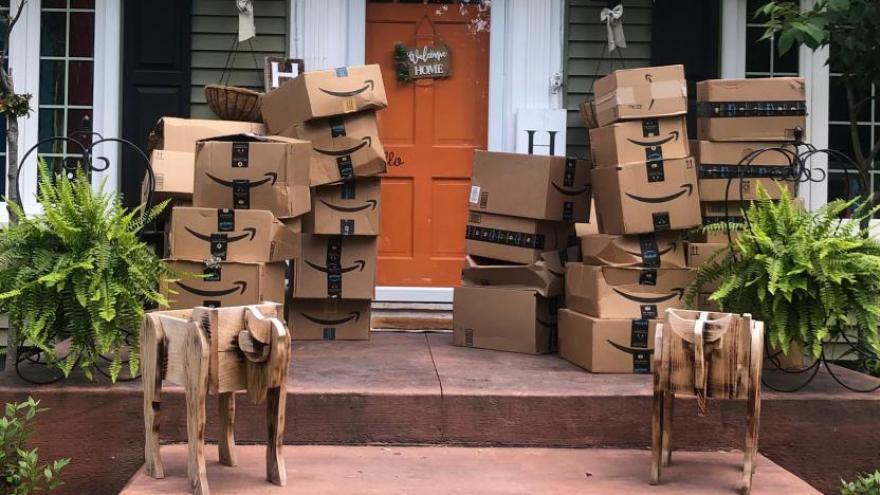 A New York woman is giving back to the community after more than 150 Amazon boxes that did not belong to her showed up at her house.

(CNN) -- A New York woman is giving back to the community after more than 150 Amazon boxes that did not belong to her showed up at her house.

Jillian Cannan told CNN started receiving packages at her home on June 5 thinking they were related to her business.

"I thought my business partner had ordered something for our studio that we were waiting for on backorder," she said. "So I opened them up to condense the boxes and I realized they were mask brackets."

Cannan sent an image to her business partner asking why she ordered so many, only to find out neither she nor her partner ordered them.

"So I go back out and I check the boxes and it's my address, but not my name," she said.

Cannan thought the packages were weird but just thought it was an honest mistake, until more started showing up.

She called Amazon and explained the situation, and was told to keep the packages and put in a ticket for the mistake.

The packages then started coming more frequently and from multiple carriers, including UPS and the postal service.

"So the one day I moved all the packages off of my porch and I left, and I got a phone call probably an hour later for my best friend's mom," she said. "And she's like, 'Just so, you know, there's a ton of packages on your porch. You can't even see your front door.'"

Cannan called Amazon again, but no one could figure out if the packages were part of a scam or just a common mistake. Cannan said Amazon worked really hard to try to get the packages to stop. She and her husband even tried to refuse them at one point without any luck.

"Then they started coming by freight trucks on pallets in our driveway," she said.

Amazon finally figured out who was supposed to be getting the mask brackets, so Cannan brainstormed with her business partner to figure out a way to use them. They own a DIY and creative studio, so they decided to use the children's brackets to create DIY mask kits for the patients at the local children's hospital.

To make it even better, the duo asked Amazon to donate the rest of the supplies for Cannan's inconvenience, and the company agreed. Cannan said a few other companies are pitching in as well.

She is finalizing the number of kits that the hospitals want and will hopefully be putting them together this week. She talking to some other hospitals in the area to donate the rest.

"It's kind of taken on this own little life of its own and it's really cool that people want to be able to give back and do something," Cannan said. "With everything going on right now, it's just crazy how it all kind of happened."