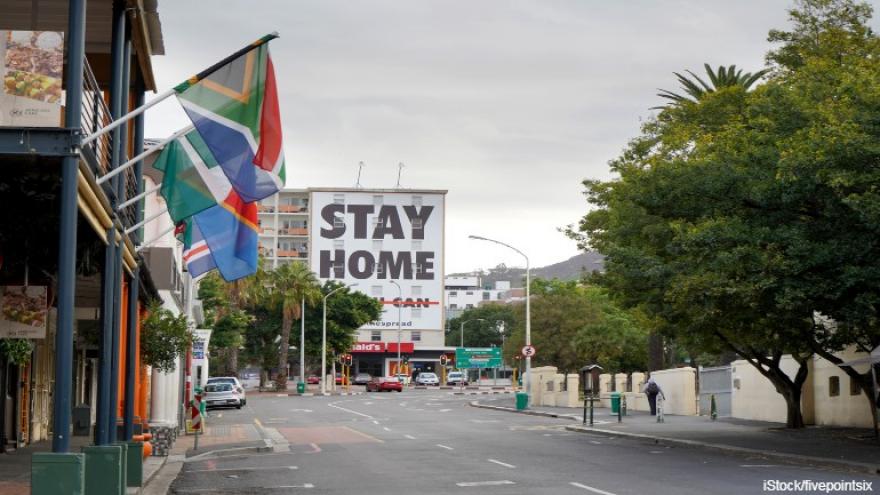 JOHANNESBURG — Africa passed the milestone of 3 million confirmed cases COVID-19 Sunday, including more than 72,000 deaths, according to the Africa Centers for Disease Control and Prevention.

South Africa accounts for more than 30% of the continent's total with more than 1.2 million reported cases, including 32,824 deaths. The high proportion of cases in South Africa could be because the country carries out more tests than many other African countries.

South Africa is battling a resurgence of the disease, driven by a variant of the virus that is more contagious and spreading quickly. Many hospitals are reaching capacity, yet the numbers of those infected are expected to continue rising, according to health experts.

South African President Cyril Ramaphosa will meet with his Cabinet this week to consider if further restrictions should be taken to slow the spread of the disease, while balancing the need to encourage economic growth.

MOSCOW — A top public health official says the highly infectious variant of the novel coronavirus has been detected in Russia.

Anna Popova, a doctor who heads Rospotrebnadzor, a government agency for human wellbeing, said on state television Sunday that the variant has been found in one patient, who had returned to the country from Britain, where it has spread widely.

Russia overall has reported about 3.4 million cases of infection and 61,800 deaths. The number of daily new cases and fatalities has been declining since the start of 2021.

PRAGUE — Thousands of angry protesters have rallied in the Czech capital to protest the government's restrictive measures imposed to contain the coronavirus pandemic.

The demonstrators representing different business groups, artists, teachers, doctors and unions have condemned the restrictions, calling them chaotic, ineffective and harmful for the country.

Many have pledged to reopen their businesses despite the current strict lockdown.

Police estimated up to 3,000 attended the peaceful protest at Prague's Old Town Square on Sunday. The demonstrators didn't have face masks and ignored social distancing rules.

Former President Vaclav Klaus, a consistent critic of the government's response to the pandemic, addressed the crowd. Klaus says the restrictions don't help anything and devastate people's lives and economy.

Benjamin Netanyahu is racing to make Israel the first country to vaccinate its population. In just three weeks, Israel already has given the first of two vaccine doses to nearly 20% of its population. It also has agreed to share data from the campaign with Pfizer in hopes of helping other countries end the pandemic.

At a small ceremony at Israel's main international airport Sunday, Netanyahu said Israel has secured enough vaccines to inoculate its adult population by the end of March. That would be just around the time of March 23 parliamentary elections.

Netanyahu is putting the aggressive vaccination drive at the forefront of his re-election hopes. Locked in a tough race, he seems to be counting that a successful vaccination drive will persuade voters to forget about his corruption trial and the economic damage caused by repeated coronavirus lockdowns.

Israel tightened its lockdown restrictions over the weekend, in what Netanyahu says is "one last effort" to halt a raging outbreak.

Israel has recorded more than 487,000 coronavirus infections and over 3,650 deaths since the pandemic emerged in the spring.

ROME — Italy added 18,627 new COVID-19 cases on Sunday, raising to 2,276,491 the nation's number of confirmed coronavirus infections in the pandemic.

Since the previous day, 361 deaths of patients with COVID-19 were registered, boosting the overall known death toll to 78,755, according to the Health Ministry.

The latest infections follow a period of year-end holiday restrictions, including limits on residents' travel but with some allowances for visiting family or friends.

Starting Monday, Italy returns to a three-tier system, with economic and social activity limits determined by how each region is faring in terms of rate of contagion, availability of ICU beds and other factors.

In a nation of some 60 million people, more than a half-million currently positive persons are isolating at home, with some 26,000 in hospital. In the pandemic's initial surge, more than two months of severe nationwide lockdown measures saw numbers of new infections and deaths eventually drop drastically.

But after measures were largely relaxed over the summer, cases started rapidly rising again and have stayed stubbornly high in number.

As of Saturday, Arizona had the second-highest coronavirus case rate and death rate per capita nationally in the last seven days, according to the U.S. Centers for Disease Control.

LONDON — Thousands of people 80 and older have started receiving invitations to get the coronavirus vaccine in England, officials said Sunday, as Britain ramps up its national vaccination program in a bid to meet its target of inoculating about 15 million people by the middle of February.

More than 600,000 invitations are due to arrive at doorsteps across England this week, asking the elderly to sign up for jabs at new mass vaccination centers near them.

The government has given a first dose of the vaccine to more than 1.2 million people so far.

The seven new large-scale vaccination centers join some 1,000 other sites across the country, including hospitals, general practitioners' clinics and some drugstores.

Officials are hoping a speedy mass vaccination rollout will help get Britain out of its third national lockdown, which was ordered this month to curb an alarming surge of COVID-19 infections and deaths. Britain has seen 81,000 deaths in the pandemic, according to a tally by Johns Hopkins University.

Germany initially managed to keep death numbers low in comparison to its European neighbors, but since October both new infections and deaths have been creeping up steadily. On Sunday Germany recorded 16,946 new infections.

The country entered a second hard lockdown last month, which was recently extended until the end of January. Schools and most stores are closed, hospitals in the country are on edge and some morgues don't have enough space to cool the relentless flow of incoming bodies.

German Chancellor Angela Merkel has warned that the coming weeks will be the most difficult in the pandemic. However, the chancellor also said mass vaccinations, which started in late December, will eventually bring relief.

"A few hundred thousand have been vaccinated and it will become more every day. The speed will pick up," Merkel said in her weekly podcast.

Germany and the European Union have so far approved the vaccines by Pfizer-BioNTech and Moderna. More that 530,000 people, mostly the elderly and medical staff, had been vaccinated by Saturday.

LVIV, Ukraine — A medical college in western Ukraine has been transformed into a temporary hospital as the coronavirus inundates the Eastern European country.

The foyer of the college in the city of Lviv holds 50 beds for COVID-19 patients, and 300 more are placed in lecture halls and auditoriums to accommodate the overflow of people seeking care at a packed emergency hospital nearby.

The head of the hospital's therapy division, Marta Sayko, said the college space has doubled treatment capacity. She hopes a broad lockdown ordered Friday will reduce the burden on the Ukrainian health care system.

Many medical workers have criticized the government for ordering the lockdown only after the Christmas and New Year's holidays rather than risk angering the public.

"We saw large-scale New Year's festivities almost in every city," Borys Ribun, chief of the regional pathology bureau in Lviv, said. "I think there will be consequences. We shall see them in a week or two."

BEIJING — More than 360 people have tested positive in a growing coronavirus outbreak south of Beijing in neighboring Hebei province.

China's National Health Commission reported Sunday that 69 new cases had been confirmed, including 46 in Hebei.

The outbreak has raised particular concern because of Hebei's proximity to the nation's capital. Travel between the two has been restricted, with workers from Hebei having to show proof of employment in Beijing to enter.

Hebei has recorded 183 confirmed cases and an additional 181 asymptomatic cases over the last eight days. China does not include those who test positive but do not show symptoms in its official case count.

Almost all of the cases are in Shijuazhuang, the provincial capital, which is 260 kilometers (160 miles) southwest of Beijing. A handful have also been found in Xingtai. Both cities have conducted mass testing of millions of residents, suspended public transportation and restricted residents to their communities or villages for one week.

MONTREAL — A curfew meant to curb a rising tide of COVID-19 cases took effect across Quebec on Saturday evening.

Premier Francois Legault says the measure is needed to prevent gatherings that have fueled the rampant spread of the virus, The French-speaking Canadian province has a population of more than 8.4 million

The rules will see most residents face police questions or fines of up to $6,000 Canadian (U.S. $4,728) if they're out between 8 p.m. and 5 a.m. for the next four weeks. There are exceptions for essential workers, people walking dogs, and those who have medical reasons to be out, such as a doctor's appointment.

They also pushed for more testing, which has lagged in Japan, being expensive and hard to get unless severely ill.

"It's essential to consider the worst possible scenario, but the response has always been based on an overly optimistic outlook," Yukio Edano, a former economy minister, said on broadcaster NHK TV.

Opposition lawmakers Toranosuke Katayama and Kazuo Shii also criticized the state of emergency as too limited in scope, area and duration. The declaration, which kicked in Friday, asks restaurants to close at 8 p.m., lasts a month and focuses on the Tokyo area.

Prime Minister Yoshihide Suga defended the focus of the declaration and said the rising curve in the infection's spread will get flattened in a month.

Deaths related to COVID-19 have totaled about 4,000 nationwide so far. Worries are growing about hospitals getting stretched thin. Tokyo's cases have surged recently to more than 2,000 a day.

The state Department of Public Health said the number raises the state's death toll since the start of the pandemic to 29,233.

A surge of cases following Halloween and Thanksgiving produced record hospitalizations in California, and now the most seriously ill of those patients are dying in unprecedented numbers.

Already, many hospitals in Los Angeles and other hard-hit areas are struggling to keep up and warned they may need to ration care as intensive care beds dwindle.