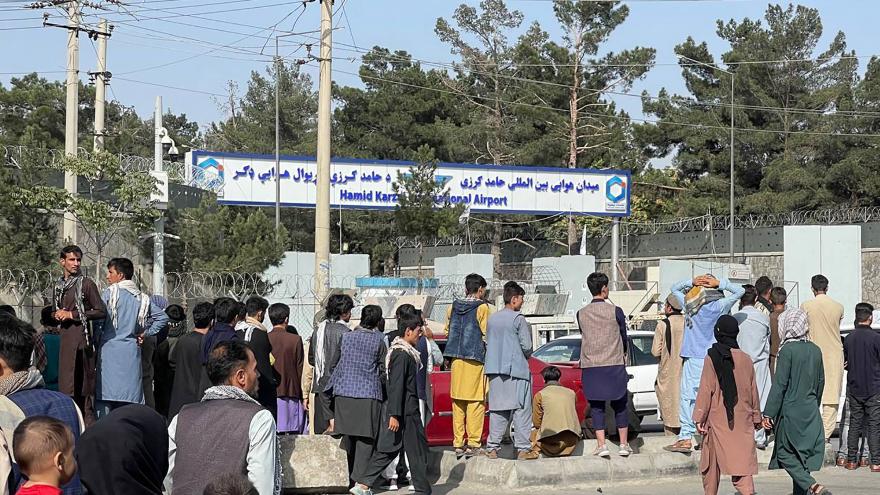 (CNN) -- US officials processing Afghan refugees abroad recently alerted the State Department to instances in which women and girls were forced into marriage or arrived with male partners posing as their husbands to be eligible for evacuation and escape the Taliban, according to two sources familiar with the matter.

The incidents described by sources to CNN were revealed while Afghans were at a transit hub abroad. They underscore the desperation among Afghans to flee the country after the Taliban takeover -- and the fear of what their rule might mean for women and girls.

It's unclear how widespread the issue is, but it prompted enough concern for US diplomats in the United Arab Emirates to send a cable.

The sources said that some Afghan women and girls housed at one of the evacuation centers in the UAE reported that their families had forced them into marriage outside of the airport in Kabul so they could escape the country as the Taliban seized power. In some reported instances, families paid men eligible for evacuation thousands of dollars to marry or pose as husbands for women to flee.

"The State Department takes allegations of human trafficking seriously and is committed to protecting vulnerable individuals globally," a State Department spokesperson said Friday. "We are coordinating across the U.S. government and with domestic and international partners to detect potential cases of human trafficking among vulnerable Afghans at relocation sites and to protect any victims identified."

One of the sources said US diplomats in the UAE would provide guidance to those working at the center on how to identify potential victims of human trafficking. Another said the US State Department had indicated it would coordinate with the Department of Homeland Security and the Defense Department.

The US is relying on third countries as temporary stops before Afghans fly to the US or other countries. Once in those third countries, Afghans are processed and vetted before continuing their journeys. Some are traveling on to the United States, where officials are using a series of military bases to house evacuees.

When the Taliban last ruled Afghanistan, between 1996 and 2001, they closed girls' schools and banned women from working. After the US-led invasion in 2001, the restrictions on women eased.

This time, the Taliban are promising to form an "Afghan inclusive Islamic government," although it's not clear what form that will take and whether the new leadership will include women.

CNN previously reported on the concern shared by Afghan women who saw progress over recent years only to fear it will be lost.

Pashtana Durrani, the founder and executive director of Learn, a nonprofit agency focused on education and women's rights, said last month that she had run out of tears for her country: "We have been ... mourning the fall of Afghanistan for now quite some time. So I'm not feeling very well. On the contrary, I'm feeling very hopeless."