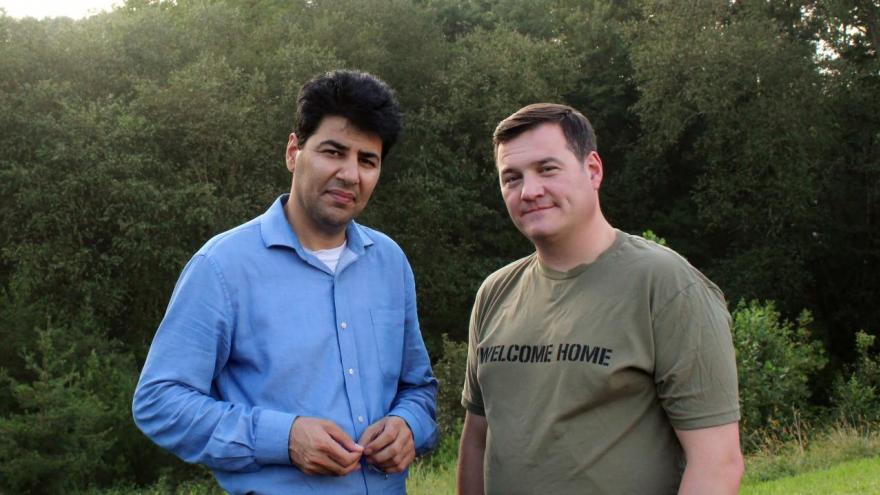 Janis Shinwari is celebrating his first Fourth of July as a US citizen. Shinwari is pictured here with Capt. Matt Zeller. Shinwari saved Zeller's life while the two operated in Afghanistan.

(CNN) -- Janis Shinwari is celebrating his first Fourth of July as a US citizen.

His journey to the US started on the battlefield in his native Afghanistan. Shinwari, 42, served nine years as a translator for US forces, knowing he was risking his life and endangering his family.

During that span, Shinwari saved the lives of several US soldiers, including one who helped bring Shinwari and his family to the US.

At the time he recalled his decision to side with US soldiers after seeing the Taliban regime's terror firsthand. Shinwari knew the US needed translators, but he also understood the dangers.

"If the Taliban catch you, they will torture you in front of your kids and families and make a film of you and then send it to other translators as a warning message to stop working with the American forces," Shinwari said.

Acting Homeland Security Deputy Secretary Ken Cuccinelli administered the oath of allegiance to Shinwari and his wife on Monday in Fairfax, Virginia. Cuccinelli honored Shinwari for his service and for saving the lives of five American soldiers.

During one particularly fierce battle in April 2008, Shinwari saved the life of Capt. Matt Zeller, an American soldier he had only met days earlier. Zeller's unit was on routine patrol near the village of Waghez in Ghazni province when the Taliban attacked. They lost a vehicle and found themselves outnumbered and outgunned.

In 2018, Zeller told CNN Heroes he was knocked out when a mortar round exploded, knocking him into a ditch. As he regained his senses, he believed he was about to die.

What Zeller didn't realize was two Taliban fighters were approaching him. That's when Shinwari, who had been crawling through bushes, shot and killed them. Zeller recalled Shinwari standing above him and saying, "I'm Janis. And I'm one of your translators. You're not safe." Shinwari recalled getting Zeller to safety and creating an unbreakable bond.

"Since that time, we become even closer than brothers," Shinwari said.

After that, the Taliban placed Shinwari on a hit list that targeted translators working with US troops. He reached out to Zeller to help him obtain a visa to come to the US. Shinwari said he expected the process to "take a couple of months. But it took years."

During that time, the 38-year-old Zeller worked tirelessly to help Shinwari. He launched a Change.org petition and reached out to his connections in Congress.

Shinwari and his family finally obtained a visa in 2013. Once in the United States, Zeller helped the Shinwaris settle into their new home. He helped Shinwari find a job, obtain a car, and guided the Shinwaris through their first year in America. Zeller even set up a GoFundMe that raised $35,000 for the Shinwaris' expenses.

But Shinwari thought about the other translators who were still in danger in Afghanistan and Iraq.

"We are happy. But I'm not happy about my coworkers, about my brothers and sisters that served the US government in Afghanistan and Iraq, and they are still left behind," he said. "I will fight for them, to get them here. And we will not stop fighting. It doesn't matter how long does it take. But I will fight for them."

So Shinwari and Zeller used part of the money to create No One Left Behind, a non-profit that has helped thousands of combat translators resettle in the US.

The group has since helped more than 5,000 translators and their families come to the US, guiding them through the visa process. The organization provides resettlement and support services upon their arrival, such as finding permanent housing, home furnishings, job placement and language skills.

"I will not stop fighting until I get the last translator what's left behind," Shinwari said. "I promise them that I will never forget about my brothers and sisters that they are still left behind in Iraq and Afghanistan."

In 2018, Matt Zeller was named a CNN Hero honoring his and Shinwari's work.

As Shinwari enjoys his first Independence Day as a US citizen, he was congratulated by lawmakers and others from across the political spectrum, including Democratic Sens. Tim Kaine of Virginia and Jean Shaheen of New Hampshire, former US Ambassador to the UN Nikki Haley, and retired Gen. David Petraeus.