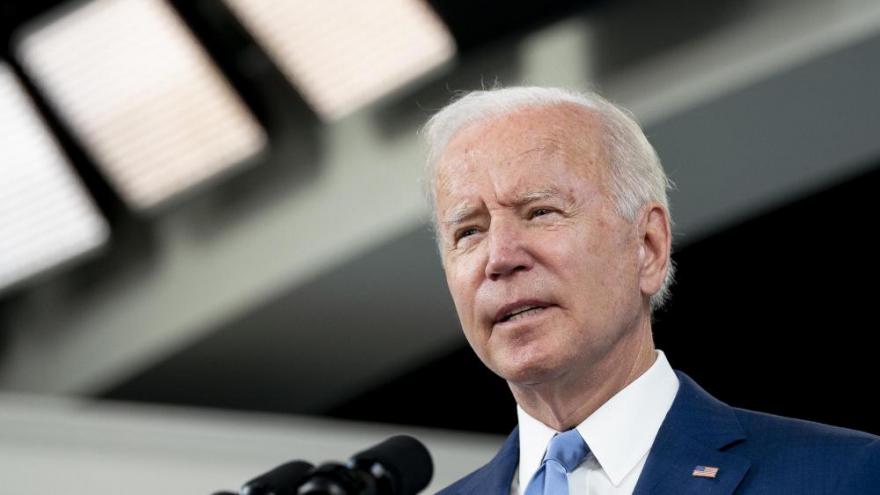 An Afghan interpreter who helped rescue then-Sen. Joe Biden after his helicopter was forced to land in a snowstorm 13 years ago has left Afghanistan. Biden is shown here at the Eisenhower Executive Office Building in Washington, D.C., U.S., on Friday, Oct. 8, 2021.

(CNN) -- An Afghan interpreter who helped rescue then-Sen. Joe Biden after his helicopter was forced to land in a snowstorm 13 years ago has left Afghanistan, sources familiar tell CNN.

Early Monday morning, the sources told CNN that the Human First Coalition, along with the State Department, successfully extracted Aman Khalili and his family from Pakistan. Khalili had recently asked now-President Biden to return the favor and rescue him from the country.

The coalition told CNN: "We are grateful for the continued support of Prime Minister of Pakistan Imran Khan for his continued support of the evacuation, Secretary Antony Blinken, Congressman Jeff Fortenberry, Senator Chris Coon, Chief of Staff DoS Suzy George, DoS JP Feldmayer, Director of Task Force Islamabad Mark Terkowski for evacuating the family of Aman Khalili, President Joe Biden's interpreter from Islamabad and their promise to evacuate the remaining 200 people that remain in Islamabad."

The Wall Street Journal was first to report the news.

The former interpreter helped rescue Biden in 2008 when his helicopter -- which was also carrying then-Sens. Chuck Hagel of Nebraska and John Kerry of Massachusetts -- was forced to make an emergency landing in the mountains of Afghanistan because of a snowstorm.

This summer Khalili said his Special Immigrant Visa was stuck in processing and that he had faith in President Biden. He told CNN's Anderson Cooper on "AC360," "I trust him."

"I trust that he can do everything," Kahlili, who was at the time only going by the name Mohammed, said of the President. "He is the President of the United States. He is a man of education."

A senior State Department official confirmed that Khalili was able to successfully leave Afghanistan and has also departed Pakistan.

"We engaged at senior levels to help facilitate all of this," the official told CNN. "We're gratified that he'll be on his way to safety."

The official said the department has "worked at every stage to expedite his processing," noting it was accurate that his Special Immigrant Visa (SIV) application was rejected a few years ago but they are working "to expedite that reprocessing."

The official would not say where Khalili and his family were heading, telling CNN, "I would not want to speak to his onward travel but we have worked to arrange it."

"Our message to him is: Thank you for fighting by our side for the last 20 years. Thank you for the role you played in helping a number of my favorite people out of a snowstorm and for all the work you did. And our commitment is enduring, not just to American citizens but to our Afghan partners who have fought by our side," Psaki said. "And our efforts and our focus right now is, as you've heard Gen. McKenzie say and others say over the last 24 hours, is to the diplomatic phase. We will get you out. We will honor your service. And we're committed to doing exactly that," she added.

This story has been updated with additional comment and background.