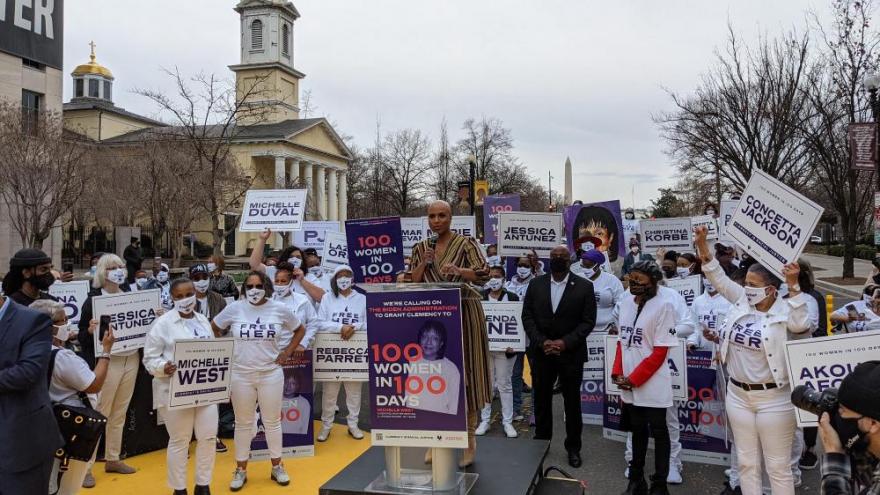 Massachusetts Rep. Ayanna Pressley gathered outside of the White House on March 12 along with the National Council for Incarcerated and Formerly Incarcerated Women and Girls to call for President Biden to grant clemency for 100 women.

(CNN) -- Miquelle West was 10 when she learned the harsh realities about the criminal justice system as her mother was handed two life sentences plus 50 years in a federal lockup for a conspiracy drugs case that was connected to a murder.

"My mom has been in prison since 1992 and she was a first-time offender ... I've been working my whole life to help my mom get a second opportunity because she shouldn't have served so many years for a crime that she actually did not commit," West, now 38, told CNN about her mother Michelle West.

The only crime Michelle West's family says she's ever committed was dating a man who was a part of a drug ring out of Flint, Michigan. The actual gunman was granted immunity in exchange for testimony against Michelle West and "did not spend a day in jail," Miquelle West told CNN.

There are over 220,000 women serving time behind bars including over 10,000 in federal prison, according to 2019 data from a nonprofit organization, Sentencing Project, and current figures from the Federal Bureau of Prisons. Many of those women -- mostly Black and Latinx -- are serving mandatory sentences or several decades behind bars for conspiracy crimes "that stem from strict 20th century war on drug crime bills," Andrea James told CNN.

James, the founder and executive director of the National Council for Incarcerated and Formerly Incarcerated Women and Girls, has called on President Joe Biden to grant pardons or to commute the sentences for 100 women at the beginning of his term.

To date, Biden has not granted pardons or clemency or commuted the sentences for any inmate in the US correctional system.

As of May 10, there were 3,211 pardon and 11,804 clemency petitions pending, according to the Justice Department. Of those, 14 pardons and 461 clemency petitions were "closed without presidential action," the DOJ statistics show.

CNN previously reported that the White House has informed activists that Biden will not wait until the end of his term to begin granting people clemency, and that they should be expected before the middle of this presidential term, according to a source. The White House is working with the Justice Department's Office of the Pardon Attorney to vet applicants.

The New York Times was first to report on the timing of the clemency requests being considered by the President.

The National Council petitions for imprisoned women who are either elderly, sick, convicted for defending themselves against domestic abusers or served more than 20 years in prison. During the National Council's ongoing campaign, they gathered outside the gates of the White House in March where Massachusetts Rep. Ayanna Pressley and Missouri Rep. Cori Bush, both Democrats, joined them to rally for Biden's attention.

Pressley says she works closely with James, who is a Massachusetts resident and a "visionary and leader" in the movement to end mass incarceration specifically for women. The congresswoman says she joined James and the National Council's call for Biden to grant clemency for these women because his executive powers can potentially save lives.

"We sit together to affirm the humanity and dignity of these women who are our sister, our daughters, our mothers, our partners. And again, to ask him [Biden] to use his clemency power to help end mass incarceration, and to deliver on that promise," Pressley told CNN during an interview last week.

Advocates say Biden has not used his executive powers to tackle the bulk of reforms listed in his America's commitment to justice plans since he has other items to focus on like rolling out Covid-19 vaccinations, climate change and reviving the economy.

"We need to get moving on commuting sentences and significant criminal justice reform. At The National Council ... we're experts in this. We can help. Let us help and get the ball rolling with a strong statement of your commitment to creating the change you campaigned on. Let's get started," James said.

"[Clemency] is not a gift to be used at the end of a presidency for the few with enough clout to get to the president's desk. Clemency is a tool that should be used immediately and abundantly by President Biden," James said. "It's time for them to go home."

Michelle West's brother, Marcell Mays, 54, says he feels like a portion of himself is still incarcerated as long as his sister is in prison. "We have been campaigning for Michelle's release for some years now even during the Obama administration ... Hopefully this current campaign will move the hearts of this administration and will free my sister," Mays said.