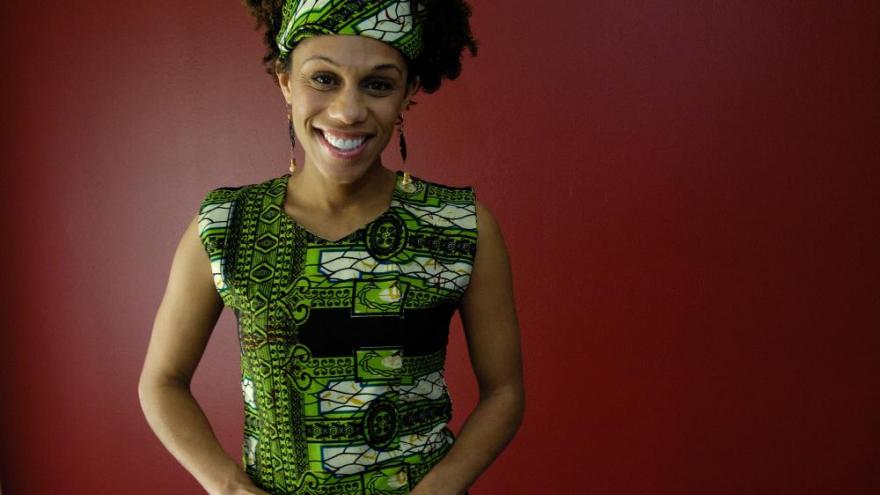 Nearly two decades after Sarah Culberson discovered that her father was the chief of a village in Sierra Leone, the West Virginia native's life story could finally come to the big screen.

(CNN) -- There could be a new princess in Disney's royal court.

Nearly two decades after Sarah Culberson discovered that her father was the chief of a village in Sierra Leone, the West Virginia native's life story could finally come to the big screen.

Culberson, who is biracial, was put up for adoption in 1976 at just a few months old, and was raised by a White family, the Culbersons, in Morgantown, West Virginia.

The discovery "gave me a deeper sense of my identity as being someone who operates and straddles two different worlds and cultures," Culberson told CNN. "Learning about my history in Sierra Leone, my family, community, country, that makes a huge part of who I am."

"A Princess Found," which Culberson co-wrote and was published in 2009, caught the attention of Disney executives 10 years later. And an all-Black female team is expected to produce the film, which is in the early development phase, according to the film's producer, Stephanie Allain. A Disney spokesperson also confirmed that it's in the early phase of development.

In 2020, Allain became the first Black woman to produce the Academy Awards ceremony. She's also the founder of Homegrown Pictures, "a film, television, and digital production company dedicated to creating content by and about women and people of color, with authentic stories, depictions, and representation," according to the company's website.

Disney signed a deal with Homegrown Pictures in 2019 to develop the movie, a Disney spokesperson told CNN.

April Quioh, a first generation Liberian American, is writing the film's script. Culberson will serve as an executive producer on the film to consult. Allain also said the team plans to hire a Black, female director.

Although Disney said the movie hasn't been green lit yet, Allain said she is hopeful that production of the film will begin next year.

"Disney+ is a great partner because they understand the value of representation, of a Black, African American princess. It's going to have a profound impact on the culture," Allain said. She added that this film has been, "10 years in the making. This story should be told and the time is now," since the book was published in 2009.

The journey in discovering her royal lineage

It wasn't until 2004, when Culberson was 28 and in graduate school that she hired a private investigator to look for her biological father.

"I wanted to know what it was like living in West Virginia as an African man with a White woman in the 1970s," and having a mixed child, she says.

Through the investigator, Culberson connected with her biological uncle who lived in Maryland. He told her news that would change the trajectory of her life.

"Sarah we are so happy you've been found, do you know who you are. You are part of the royal family. You can be chief someday, you are a princess in this country (Sierra Leone)," she recalls her uncle telling her.

Culberson, who was working as an actor and dancer at the time, couldn't believe it. "What? This isn't true," was her first thought.

In 2004, she went to Sierra Leone to visit her biological dad.

"It was this beautiful, beautiful homecoming," she recalls.

She was given a traditional green dress to wear by Chief Kposowa, which was also worn by the women in Bumpe when they welcomed her. Upon her arrival, the women in green dresses were singing "'we're preparing for Sarah' in Mende," Culberson recalls.

Hundreds of people surrounded and welcomed her, and the celebration included speeches, dancing and singing.

Culberson says her discovery gave her a deeper sense of her identity.

West Virginia was not racially diverse growing up.

Her adoptive parents tried to expose her to as much diversity as they could. Her adoptive father, Dr. Jim Culberson, was a professor at West Virginia University. The school had always been more diverse than the surrounding town, she says.

Finding the courage to keep searching

It took Culberson years to gather the courage to search for her biological dad because she was afraid of rejection.

"I had a family member on my birth mother's side who didn't want to meet me and she wasn't warm (to me)."

Culberson was 21 at the time. "It was really heartbreaking for me," she says.

But there was a happy ending with her biological father's acceptance years later.

When she met him at 28, he asked for her forgiveness and told her he searched for her but didn't know how to find her after she was adopted.

Culberson hopes the film teaches all children, especially Black children, to explore their own lineage.

She hopes this film, "gives kids, especially Black kids, a deeper understanding of their roots. Your history doesn't start with slavery, which is what our history books tell us (in school). We don't know a lot about where we (African American and Black people) come from, I have that direct connection, but a lot of people don't."

The "movie would be a wonderful way for kids to learn about culture, adoption, and the power and impact of forgiveness, and having people get to know about different cultures that we don't know about like Sierra Leone...the story would be about facing your fears," Culberson says.

Culberson says being a princess has brought her adopted and biological families together.

Since she discovered her royal lineage, she started a non-profit foundation called Sierra Leone Rising in 2006. The organization advocates for public health, education, and female empowerment after Sierra Leone faced an 11-year civil war that ended in 2002.

Culberson's advocacy work as a royal in Sierra Leone has not only brought her closer to her biological family, who she works with on the foundation, but it has brought her adopted and biological family together as well. "The connection between us has been beautiful," she explains.

Her adopted parents and siblings work with the foundation as well in Sierra Leone, and the Culbersons have visited country as well.

"The discovery of my royal lineage with the relationship with my (adopted) family has been really beautiful and that has a lot do with who my (adopted) parents are as people...It brought the family together."

Correction: A previous version of this story misspelled Stephanie Allain's name. It has been fixed.