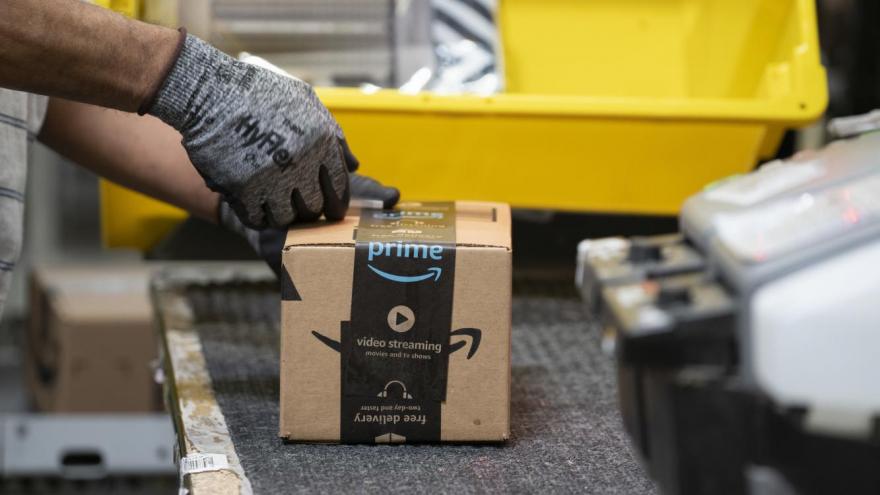 In this April 30, 2019, file photo, an employee places a label on a box at the Amazon.com Inc. fulfillment center in Baltimore.

(CNN) -- Officials from the Department of Homeland Security and the White House said Friday that they are taking steps to shift more of the burden of tackling counterfeit goods to e-commerce hubs like Amazon, a response to an April 2019 presidential memo.

Peter Navarro, director of the White House Office of Trade and Manufacturing Policy, said the shift is needed because the onus and cost have been on the government and intellectual property rights holders to "police the internet" for counterfeit goods.

"It just can't work that way," he said during a news conference Friday to announce the plans.

He said the strategy is to "shift the burden to the places where the burden needs to be adopted," such as hubs like Amazon, eBay and Alibaba.

Amazon issued a statement Friday acknowledging that trust is difficult to earn but pushing back on the idea that it has not accepted responsibility. A spokesperson said Amazon has invested more than $400 million to "protect our store from fraud, including counterfeit or non-compliant products."

"We already have programs and processes that go well beyond our obligations under US law," the statement said. "Our efforts have ensured that over 99% of the products our customers view on Amazon never receive a complaint about counterfeits. Beyond blocking fraudsters from our store, we also work closely with brands and law enforcement to hold bad actors accountable offline, including both civil and criminal law suits."

Last April, President Donald Trump had instructed DHS to compose a report in conjunction with the Commerce Department, the attorney general and other federal agencies with recommendations for combating counterfeit goods in the American marketplace within 210 days.

Asked at the time whether Trump's memo had anything to do with the President's animus for Amazon CEO Jeff Bezos, Navarro replied, "Zero."

"Despite public and private efforts to-date, the online availability of counterfeit and pirated goods continues to increase," reads the report, released Friday.

Acting Homeland Security Secretary Chad Wolf said Friday that the solution to the problem of pirated and counterfeit goods "doesn't rest solely" with US government action.

"Today's report, where appropriate, shifts the burden to the private sector," said Wolf. "International e-commerce sellers must step up and do more."

Wolf said the private sector must "aggressively self-police and focus their innovation and expertise" on the issue, adding that the department would continue its work with the industry and seek feedback.

Wolf also called on consumers to inform themselves about the risks associated with counterfeit goods.