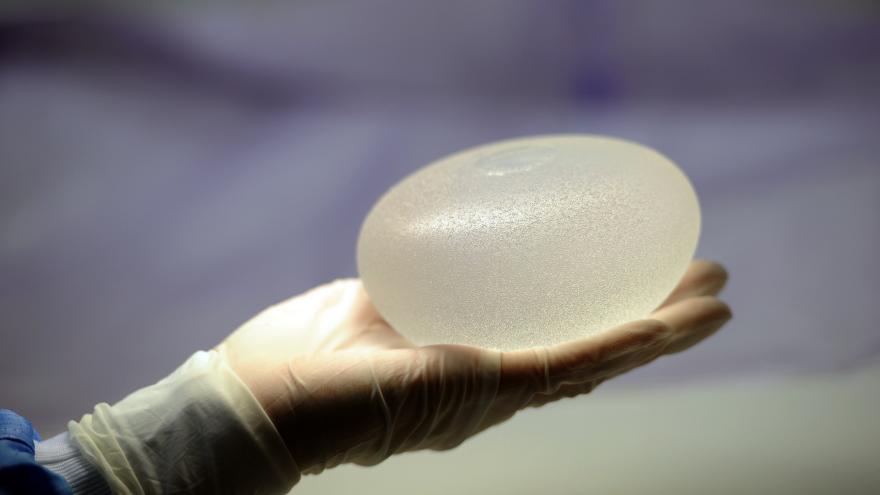 (CNN) -- The US Food and Drug Administration is alerting the public about certain cancers -- including squamous cell carcinoma and various lymphoma -- that have been reported in the scar tissue that forms around breast implants.

The FDA announced Thursday that although it believes that occurrences of squamous cell carcinoma and various lymphomas in the capsule around breast implants may be rare, health care providers and people who have or are considering breast implants should be aware of these cases -- and report them or any other cancers found around the implant to the agency.

These various lymphomas are not the same as lymphomas that have previously been described as associated with breast implants, according to the FDA's announcement.

The FDA said that, after a preliminary review of published literature, it is aware of fewer than 20 cases of squamous cell carcinoma and fewer than 30 cases of various lymphomas in the capsule around the breast implant.

People with breast implants do not need to change their routine medical care, according to the FDA, but they should be aware that some of the reported signs and symptoms included swelling, pain, lumps or changes in the skin.

The agency said it learned about these reports of squamous cell carcinoma and various lymphomas during an ongoing postmarket review of the safety of breast implants in the United States.

"Reports submitted to the FDA are just one source the FDA uses to monitor the safety of medical devices, in addition to mandated postmarket studies, published literature, and real-world data from registries and claims databases," the announcement said. "The FDA will continue to gather and review all available data from these sources to evaluate the occurrence of cancers in the capsule around breast implants."

The exact incidence rate and risk factors for these cancers remain unknown, and "this is an emerging issue and our understanding is evolving."

A history of health concerns and breast implants

A link between breast implants and systemic disease, including autoimmune disease, has been reported since the 1960s, according to a paper published this month in the journal Plastic and Reconstructive Surgery.

In 2011, the FDA first identified a possible association between breast implants and the development of a rare cancer called breast implant-associated anaplastic large cell lymphoma, or BIA-ALCL.

In 2019, the pharmaceutical company Allergan issued a worldwide recall of Biocell textured breast implants and tissue expanders that have been linked to the rare cancer. The move came after the FDA requested that the manufacturer voluntarily recall the products, and the FDA maintains a registry to which doctors are supposed to report cases of anaplastic large cell lymphoma in people with breast implants.

Since then, efforts have been made to better inform breast implant patients about potential health risks.

Last year, the FDA made several changes to breast implant regulations, including new labeling with a boxed warning and a patient checklist that informs people that implants are not a medical device that will last a lifetime.

The FDA said it decided to restrict the sale of breast implants to health care providers who offer patients a standardized checklist that explains the risks. The changes require doctors to walk patients through these potential health problems and to give the patient an opportunity to sign off on the checklist to show that they were properly informed about the risks to their health.

Although most women have breast implants with no serious complications, as many as 20% of women who get implants for augmentation have to have their implants removed within eight to 10 years, owing to complications, according to the FDA.

The older the implants are, the more health risks they pose, and those risks could require additional surgery.

"Breast implants are not meant to be lifetime devices. They have a lifespan, and that might range from seven to 10-plus years, based on the implant and patient," Dr. Tommaso Addona, a plastic surgeon and president of the Long Island Plastic Surgical Group in New York, told CNN in 2019 when the FDA held a meeting to review the safety of breast implants.

He added that he often discusses benefits and risks with his own patients.

"We do discuss complications. Those range from scarring around the implant, sometimes soreness and discomfort from the implant ... to in the last seven years, probably a bit more, we've become more acutely aware of a specific type of lymphoma that is associated with breast implants," he said. "What the general public should appreciate is, as doctors and clinicians, we always want what's best and safest for our patients. We're constantly not only educating ourselves but educating our patients."