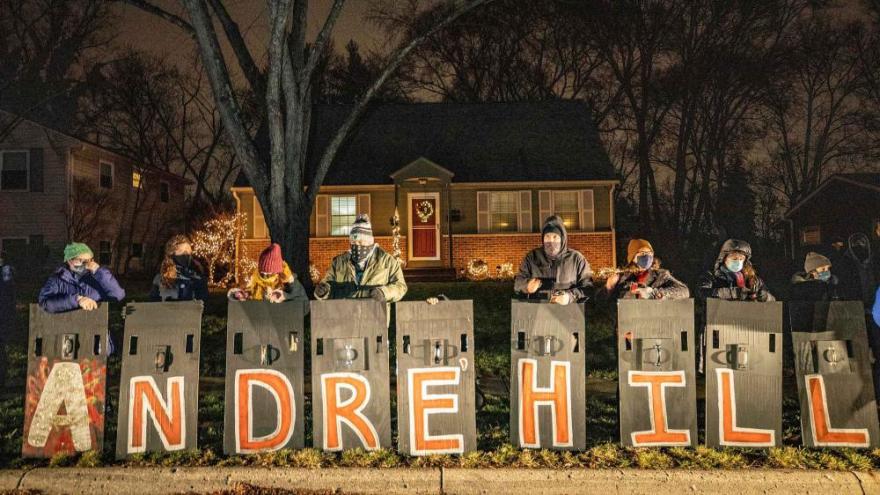 According to court reports, prosecutors file an additional reckless murder charge against former Ohio police officer Adam Coy, for the shooting of Andre Hill. Pictured protesters in Ohio on December 28, 2020.

Coy was previously indicted in February on charges of murder in the commission of a felony, felonious assault and two counts of dereliction of duty related to Hill's death. He pleaded not guilty to those charges.

An attorney for Coy, Mark Collins, told CNN Friday that his client planned to plead not guilty to the new charge.

"This new charge leads us to believe the prosecution doesn't have faith in their felony murder charge," Collins said.

Hill was shot and killed in December while Coy and another officer were responding to a report of a man who had been sitting in his SUV for an extended period, repeatedly turning his engine on and off.

Coy fatally shot Hill, who was Black, within seconds of their encounter as Hill walked toward Coy holding an illuminated cell phone in his left hand, body camera footage showed. Hill was unarmed.

Coy turned his camera on after the shooting. The camera's look-back feature captured 60 seconds of video, but no audio, before Coy turned it on.

The body camera footage appears to show Coy and Hill walking towards one another, and Coy starts shooting within a few seconds. It's not clear whether Hill or Coy said anything during their brief interaction because Coy did not activate his body camera.

The first few seconds of Coy's body camera video in which audio is available show the officer ordering Hill to get his hands out to the side, ordering him to get on his stomach, and warning an officer to not get close because one of Hill's arms is under the car where he collapsed.

Benjamin Crump, an attorney representing the Hill family, said in December that Hill was visiting a family friend at the home where he was killed.

Coy was fired in December as a result of the shooting. Then-Chief of Police Thomas Quinlan said in a statement at the time that the evidence against Coy provided "solid rationale" for termination.

The next hearing in the case is scheduled for Wednesday, April 28.