Activists have long said a Santa Fe monument celebrated the killings of Native Americans. Crowds toppled it this week 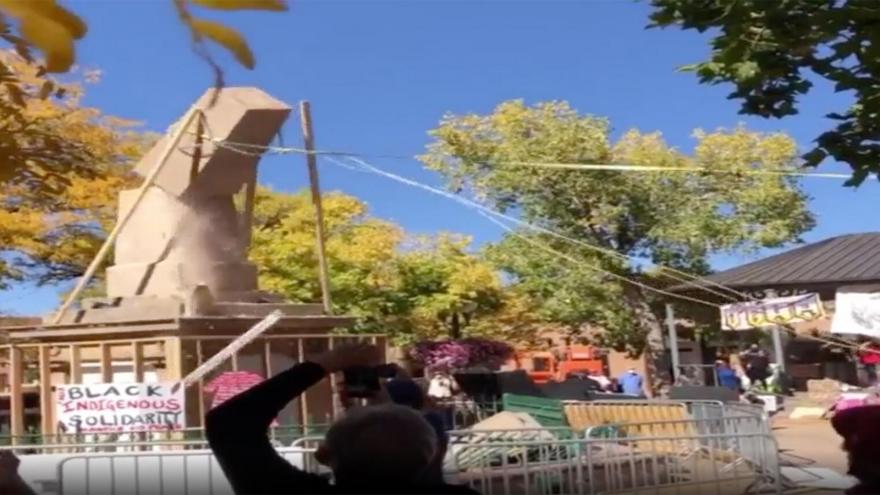 (CNN) -- At least two people were arrested in Santa Fe, New Mexico, Monday after a crowd toppled a monument that Native American community members have long called on to be removed.

Demonstrations around the monument -- an obelisk found in the middle of the city's Plaza Park that activists say celebrated the killings of Native Americans -- began Saturday, Santa Fe Mayor Alan Webber said, when protesters chained themselves on the obelisk.

The monument's destruction took place as New Mexico celebrated Indigenous People's Day and comes following a summer of racial reckoning and unrest during which protesters have torn down other statues and monuments honoring controversial figures and racist parts of the country's past.

Monday's actions come months after the mayor announced he was calling for the removal of the monument -- along with two others -- saying it was "long overdue."

That was in June, when Webber said he would create a commission to review different monuments in the city and evaluate whether "they cause pain" and "tell an honest version of history," he said. That commission would decide "how each should be treated," he had said in a statement.

Responding to the mayor's June announcement, Pueblo of Acoma Governor Brian D. Vallo had said he was grateful for the decision that included the "the obelisk with an inscription referencing Pueblo people as 'Savage Indians' located in the center of the historic plaza."

"There is absolutely no place for these symbols that glorify the mass killing of our people," Vallo said in a June statement. "It is clear that times have changed and there is a new openness to discuss how to better memorialize our shared history in a way that promotes deeper understanding and cooperation. Our Pueblo stands ready to participate in these conversations, and we thank Mayor Webber for his leadership on this matter."

Following the statue's destruction on Monday, city officials said in a statement there were "a variety of legal issues under review" by the city attorney's office related to the obelisk.

"Everyone should acknowledge that these situations are complex and the issues we're engaged with are complicated," a news release from the city said.

"We know individuals want to be heard. There is work underway to review the legal issues surrounding the removal or preservation of statues and monuments that are in public places. There is also work going on to review different approaches to a task force or working group that can undertake a community-wide discussion around statues and monuments, histories and cultures," the release said.

A recommendation should be coming out soon, it said.