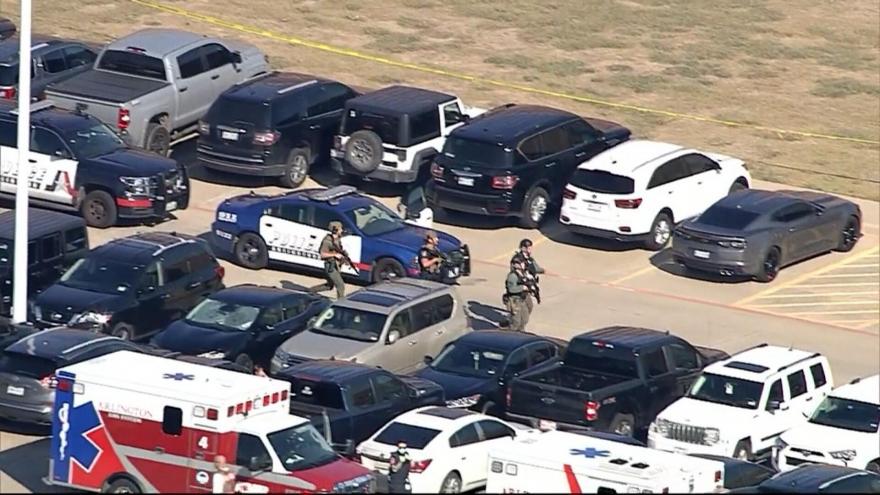 18-year old Timothy George Simpkins is in custody. Simpkins is suspected of a shooting at Timberview High School in Arlington, Texas.

(CNN) -- The suspect in a shooting at a Texas high school Wednesday is in custody, Arlington police said.

An Arlington Police Department news release said Simpkins turned himself in without incident and his bond was set at $75,000.

The shooting at Timberview High School left four people injured. Among the four, two were shot and three were hospitalized.

All three hospitalized are expected to survive, Kolbye said. One of the victims is a 15-year-old boy with gunshot wounds who is listed in critical condition, according to the release.

Officials said about 1,700 students were at the school and all have left the building.

"The incident occurred in a classroom on the second floor of the school," the release read. "Investigators believe a physical fight broke out just prior to the shooting."

The department tweeted a photo of Simpkins and asked for the public's help in finding him.

By early afternoon, Simpkins was in custody.

Arlington police said a weapon was recovered in "the streets of Grand Prairie," a few miles from the high school.

Chief Daniel Scesney said police believe it was the weapon used in the school shooting, but that has not been confirmed. He said the gun has been turned over to the ATF for ballistics testing.

Metal detectors are not used at Timberview High School, which is part of the Mansfield Independent School District, a Mansfield ISD spokesperson said.

Security has been increased at all schools in Arlington and Mansfield, Kolbye said. Both cities are near Dallas and Fort Worth.

Kolbye said the schools were "locked out" so students can move within the schools, but no one else could enter. it was not clear exactly how long that security measure will be in place.