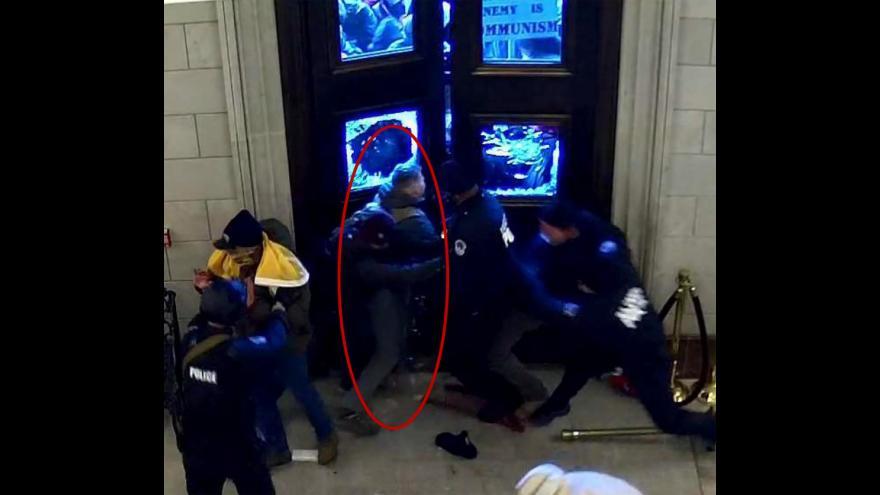 Major Christopher Warnagiris, who is stationed at Marine Corps Base Quantico, was arrested in Virginia, according to the Justice Department.

(CNN) -- An active-duty US Marine was arrested Thursday for allegedly participating in the deadly Capitol insurrection and charged with assaulting multiple police officers inside and outside the iconic building during the attack.

Maj. Christopher Warnagiris, who is stationed at Marine Corps Base Quantico, was arrested in Virginia, according to the Justice Department.

Warnagiris is charged with assaulting, resisting or impeding officers; obstruction of law enforcement during civil disorder; and obstruction of justice; among other charges.

He is the first active-duty officer to be charged, the Pentagon confirmed.

Other current or former service members were previously charged in connection with the January 6 attack at the Capitol, according to a CNN review of court documents and Pentagon records. Earlier this month, federal prosecutors also charged a member of the Wisconsin National Guard with four federal crimes, including violent entry or disorderly conduct.

The Justice Department says Warnagiris' actions were caught on video posted to YouTube and that he pushed through a line of police officers guarding the East Rotunda doors on January 6, violently entering the Capitol.

He then allegedly then positioned himself in the corner of the doorway and used his body to keep the door open and pull others inside. Prosecutors say Warnagiris resisted when a US Capitol Police officer tried to pull the doors shut.

The FBI had been seeking Warnagiris' identity, posting his photo among hundreds of others on its website. The Justice Department said in charging documents that a member of the public who worked with Warnagiris in 2019 had identified him to the FBI, which led investigators to go to his military command, where they interviewed one of Warnagiris' co-workers, who also said Warnagiris was the man seen in the photos from the FBI's website.

The US Marine Corps confirmed Warnagiris' status as an active-duty Marine and said in a statement that it condemns "racial hatred or extremism in the Marine Corps," adding: "Bigotry and racial extremism run contrary to our core values."

"Participation with hate or extremist groups of any kind is directly contradictory to the core values of honor, courage, and commitment that we stand for as Marines and isn't tolerated by the Marine Corps," Maj. Melanie Salinas, a Marine Corps spokesperson, said in the statement.

Warnagiris made an initial appearance in federal court on Thursday and will have a preliminary hearing in Washington once he hires an attorney. He had not entered a plea and is not being detained.

At least 400 people have been charged in connection with the Capitol riot, according to a CNN review of court documents. There are hundreds of still-unidentified photographs of rioters on the FBI's "most wanted" website, indicating that plenty of people who stormed the Capitol haven't been charged yet -- and that the unprecedented investigation continues.

The deadly attack injured more than 100 police officers, halted Congress' counting of the Electoral College votes for more than five hours and forced lawmakers into lockdown when pro-Trump rioters overran the US Capitol Police.