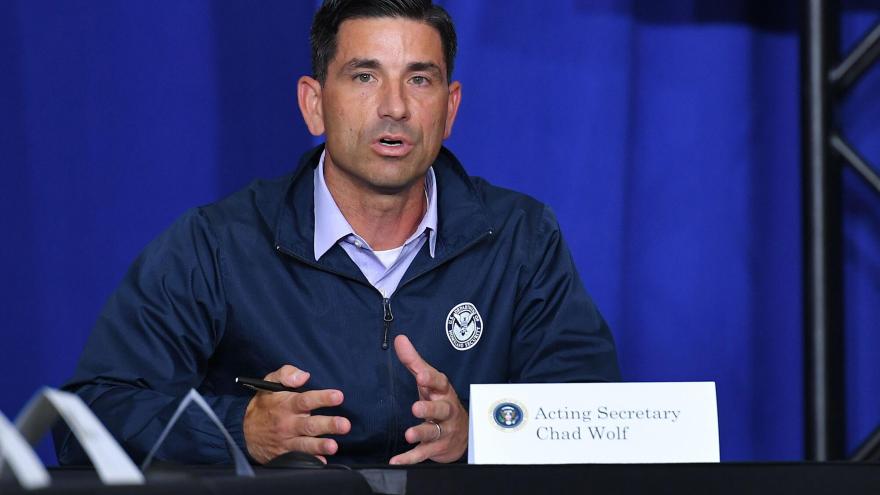 Acting Homeland Security Secretary Chad Wolf appears ready to defy a House subpoena issued last week for him to testify Thursday on threats to the US homeland, as he is not planning to attend the hearing, according to a department official.

(CNN) -- Acting Homeland Security Secretary Chad Wolf was a no-show Thursday morning at a House hearing on threats to the US homeland after a feud between the department and the committee over scheduling.

Instead, Wolf is participating in a meeting with Senate Homeland Security Committee staff regarding his nomination to be secretary of the Department of Homeland Security Thursday, according to two committee aides and confirmed by DHS, though it's unclear if timing of the meeting conflicted with the hearing.

"As the person running the Department of Homeland Security, Mr. Wolf should be here to testify, as secretaries of Homeland Security have done before. Instead, we have an empty chair -- an appropriate metaphor for the Trump Administration's dereliction on so many of these critical homeland security issues," Thompson said at the hearing.

Last week, the committee issued the subpoena to Wolf amid whistleblower allegations that he urged department officials to alter intelligence.

It's not the first time Thompson has subpoenaed the head of DHS to testify. Last year, Thompson's committee issued a subpoena to Wolf's predecessor Kevin McAleenan for a terrorism hearing. McAleenan ultimately appeared before the panel.

"Regrettably, he has chosen to defy the subpoena and refuses to come before the Committee after committing to do so should appall every Member of this Committee," Thompson said Thursday. "Insisting Mr. Wolf keeps his commitment to testifying before Congress isn't playing politics -- it's doing our job."

Wolf's nearly year-long tenure as acting DHS chief has come under increased scrutiny. A federal judge in Maryland recently ruled that Wolf is likely unlawfully serving as acting secretary of the department, and subsequently lacked the authority to impose specific asylum rules concerning employment that are being challenged.

CNN has also previously reported that the Government Accountability Office found that Wolf and Ken Cuccinelli, the senior official performing the duties of the deputy Homeland Security secretary, had been appointed as part of an invalid order of succession.

Thompson said the committee began engaging with the Department of Homeland Security on June 10 "to secure Mr. Wolf's participation in this hearing, alongside his colleagues from the FBI and National Counterterrorism Center." The department, according to Thompson, tentatively offered some dates but couldn't agree with its FBI and NCTC counterparts on a date for the hearing in June or July.

Cuccinelli said Wednesday that Wolf wouldn't appear because his nomination is pending and criticized the committee for not accepting him in Wolf's stead. On Thursday, Cuccinelli posted his proposed testimony on Twitter.

Rep. Mike Rogers of Alabama, the top Republican on the committee, conceded he was also "disappointed" that Wolf was not present at the hearing, but called Democrats' decision not to accept Cuccinelli in his place a "political stunt."

Little recourse for not complying with subpoena

The House has few, if any, options for enforcing the subpoena aside from arresting Wolf themselves -- an unlikely and archaic scenario.

A recent appeals court decision gutted the House's ability to ask judges to enforce the decision.

The House could also vote to hold Wolf in criminal contempt, but the Trump administration has made clear it would not bring a criminal case against its own officials to enforce a subpoena. The White House and several powerful agencies have repeatedly refused to hand over information to the Democratic-led House in other inquiries, such as impeachment of the President and investigations into Russian interference and the handling of the 2020 census.

Instead, the administration has avoided the most contentious House subpoenas by tying them up in court, a route that's been widely successful. The House is still in appeals, asking for a restoration of their power to sue.