Acid-shooting whip scorpions are roaming a national park in Texas 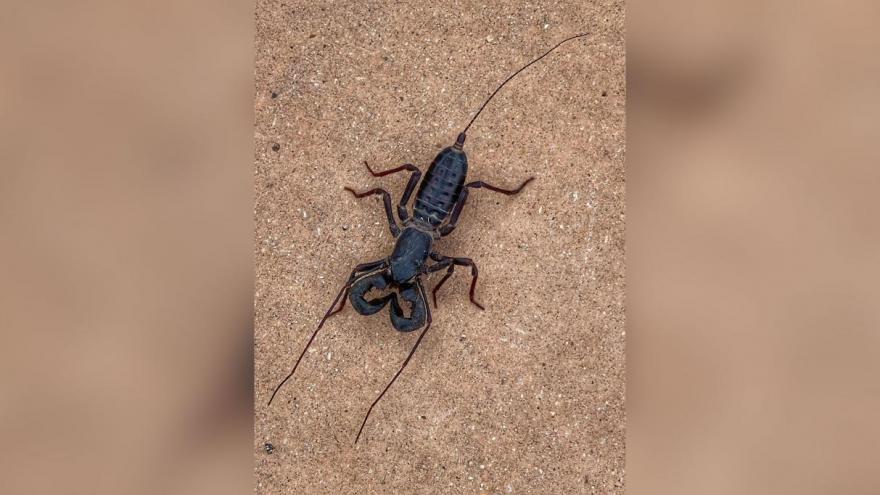 This vinegaroon was spotted near the Chisos Basin campground, according to Big Bend National Park.

(CNN) -- Some freaky-looking creatures are out looking for mates this summer. And no, we're not talking about the contestants on "Sexy Beasts."

Big Bend National Park in southwest Texas is alerting visitors that summer rains are bringing arachnids called vinegaroons "out of their burrows in search of food and love."

These three-inch creatures, also known as whip scorpions, can pinch with their heavy mouthparts, according a Facebook post from the national park. They also have long, whip-like tails which can shoot a spray of 85% acetic acid, a main component of vinegar.

The critters sound frightening and have inspired sensational headlines about "acid-shooting land lobsters."

But the vinegaroons, which are nocturnal and can't see very well, are "relatively benign unless you annoy them," the park says.

They are primarily found in west Texas, especially the Trans-Pecos region, according to Texas A&M's AgriLife Extension Service. They're more commonly found in the desert, but have also been reported in grassland, scrub, pine forests and mountains.

The park says they hunt millipedes, scorpions, crickets and other invertebrates by sensing vibrations with their front legs.

While they may be unsettling to look at, don't panic if you come across one. Vinegaroons are not poisonous.

In fact, Big Bend seems to be encouraging people to look closer at the strange, insect-like creatures. The park notes that if you spot a female, she may be carrying hatchlings on her back.