Accused Michigan school shooter's parents are expected to call him as a witness at their own trial, attorney says 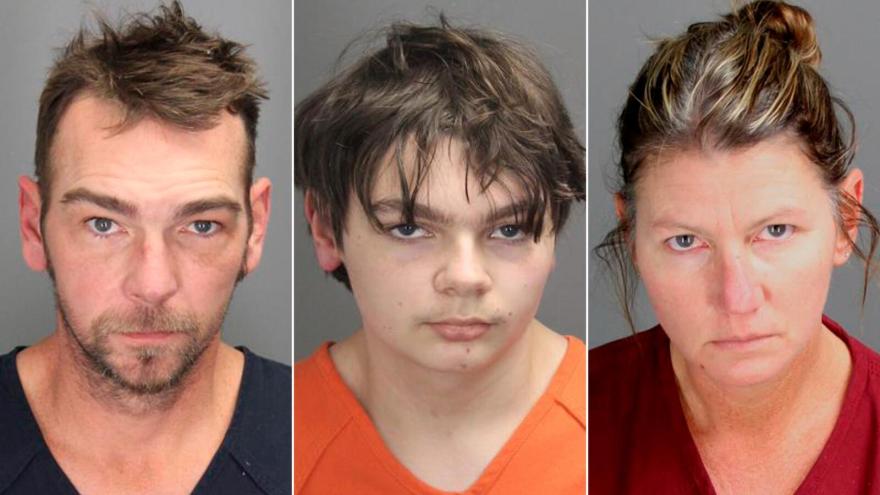 (CNN) -- The parents of accused Oxford, Michigan, school shooter Ethan Crumbley are expected to call their son as a witness to testify at their own trial, attorneys for the parents said in court Monday.

Jennifer and James Crumbley were each charged with four counts of involuntary manslaughter after their teenage son allegedly shot and killed four students and injured seven other people at Oxford High School in November. They have both pleaded not guilty and their attorneys have argued in court documents that the charges have no legal justification and the couple should not be held responsible for the killings their son is accused of committing.

On Monday, Attorney Shannon Smith said the Crumbleys plan on calling their son to testify on "extraneous matters that are important in the case."

"We need him as a witness in this trial," Smith said in Oakland County District Court, later adding, "He can answer questions that are not covered by the Fifth Amendment."

Oakland County Assistant Prosecutor Marc Keast responded that he could not "conceive the possibility of how the defendant's son would be able to testify in this case."

The exchange was prompted by Oakland County Circuit Court Judge Cheryl Matthews asking if both sides were still able to start the trial on October 24.

Smith said they had an issue because Ethan Crumbley's trial was moved to January 17, 2023, due to the volume of evidence, and his lawyer and the judge on that case wanted his parent's trial to be done before his. CNN has reached out to Ethan Crumbley's attorney for comment.

Prosecutor Karen McDonald also questioned if this was a way to have the accused shooter highlight his alleged role and diminish any involvement by his parents.

"This is not about the defendants wanting to throw their son under the bus or make him look bad. This is about our clients defending the case," Smith said. "When the prosecution criticizes the defense for being selfish in wanting to defend the case, we are going to be selfish all day. We agree. Because selfishly, we have to protect their rights."

During Monday's hour-long hearing, Matthews made several rulings related to the case, including denying a motion to move the Crumbley's trial out of Oakland County, saying pretrial publicity doesn't warrant a venue change as that is "reserved for circumstances where adverse publicity is so pervasive and inflammatory that jurors cannot be believed when they assert, they cannot be impartial."

The judge also restricted both sides from speaking publicly about the case, which prompted concerns from prosecutors, who said they want to be able to correct any false statements being made in the press about the case to avoid upsetting victims.

"It's not your job to correct the statement," Matthews said in response. "It's your job to give the defense a fair trial and that's what you're going to do."

Judge Matthews also ruled that the alleged shooter's journal, which was found in his backpack at the school after the shooting, would be admissible as evidence because they point to his state of mind.

"'I have access to the gun and ammo,'" said Matthews, reading a passage from Ethan Crumbley's journal that prosecutors want to use as evidence. "'I want to help but my parents don't listen to me so I can't get any help. I have zero help from my mental problems and it's causing me to shoot up the (expletive) school. My parents won't listen to me about help or a therapist.'"

In another section read by the judge in court, the alleged shooter wrote how he considered calling 911 but didn't because he was afraid that he would anger his parents.

The judge also read out a text message Ethan Crumbley sent an unnamed friend: "'I actually asked my dad to take me to the doctor yesterday, but he just gave me some pills and told me to suck it up. Like, it's at the point that I'm asking to go to the doctor. My mom laughed when I told her but I'm having bad insomnia right now and paranoia. I need help.'"

In addition, Matthews ruled to allow questions pertaining to horses and horseback riding but declined to admit any on Jennifer and James Crumbely's extra-marital affairs.