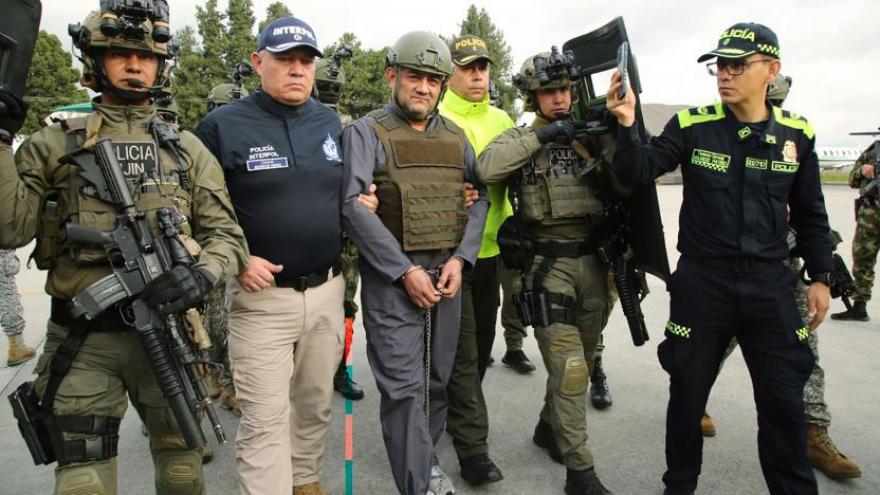 Police escort Dairo Antonio Usuga, center, also known as "Otoniel," at an airport in Colombia before his extradition to the US. The accused Colombian narco-trafficker was extradited to the United States on May 4 to face drug trafficking charges, a source within the Colombian National Police told CNN.

(CNN) -- The accused Colombian narco-trafficker Dairo Usuga, also known by the alias "Otoniel," was extradited to the United States on Wednesday to face drug trafficking charges, a source within the Colombian National Police told CNN.

On Thursday, he pleaded not guilty to charges of participating in an international cocaine manufacturing and distribution conspiracy, among other charges, in federal court in New York City.

Usuga is widely considered to be the boss of the "Clan del Golfo," a powerful drug cartel that controls cocaine routes into Mexico and the United States. He is being held at the Brooklyn Metropolitan Detention Center in New York City.

Usuga was charged in a three-count superseding indictment with leading a continuing criminal enterprise from June 2003 through October 2021 and participating in an international conspiracy to manufacture and distribute cocaine, knowing and intending that the narcotics would be illegally imported into the US, according to the indictment.

Usuga was captured by Colombian authorities in October in a rural area of the northwestern Uraba region in Antioquia province, a feat President Iván Duque celebrated as "the biggest arrest of a narco-trafficker by the Colombian police since the days of Pablo Escobar."

At the time of his arrest, the alleged cartel leader was facing at least 122 charges for drug trafficking, criminal association, murder and money laundering, according to the Colombian Attorney General's office.

His extradition was approved by presidential decree after the Colombian State Council denied an appeal by several victims of Usuga's alleged crimes who wished to see him tried in Colombian court.

The State Department previously offered up to $5 million for information leading to his arrest or conviction.

On Thursday, at least one person was killed in Cereté, northwestern Colombia, amid an escalation of violence in several Colombian districts, the country's Ombudsman Carlos Camargo said in a statement.

The escalation follows the imposition of an armed curfew by a powerful drug cartel in retaliation for the extradition to the United States of Dairo Usuga, also known as "Otoniel," he said.

Early on Thursday, pamphlets allegedly from the Clan del Golfo began circulating on Colombian social media calling for citizens in several departments in northwestern Colombia to stay home and suspend any economic activity in the area for four days due to Duque's order to extradite Usuga.