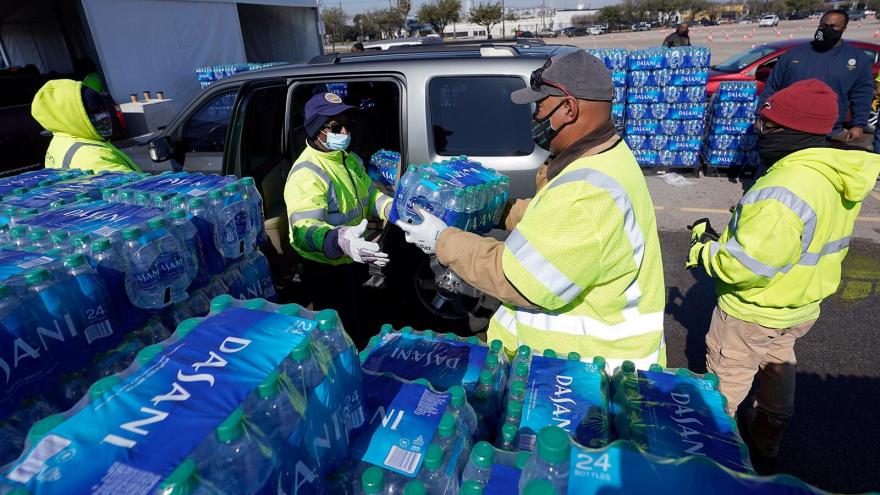 Water is loaded into a vehicle at a City of Houston water distribution site Friday, Feb. 19, 2021, in Houston.

(CNN) -- Water service remained disrupted for nearly a third of Texas residents Sunday evening, a lingering consequence of the widespread power outages from devastating winter weather and an unprepared infrastructure.

While that number decreased by several million over the course of the day, more than 1,200 public water systems still reported disruptions in service, with many leading to boil-water notices, according to Gary Rasp, media specialist for the Texas Commission on Environmental Quality.

The issues were still affecting more than 8.8 million people -- or roughly a third of the state's population of 29 million -- spread across 199 counties as of 7 p.m. (8 p.m. ET) Sunday. Rasp said 258 boil-water notices had been rescinded.

Houston announced Sunday afternoon it had lifted its boil-water notice effective immediately. "Water quality testing submitted to the Texas Commission on Environmental Quality (TCEQ) has confirmed that tap water meets all regulatory standards and is safe to drink," the city said in a news release.

Galveston also lifted its boil-water notice midday Sunday and is removing water restrictions, according to a post on the city's Facebook page.

The water issues are part of the sprawling impacts of extensive blackouts: families forced to sleep in frigid homes and cars, scavenge for a hot meal, forgo medical treatment or use melted snow to flush the toilet.

At a news conference Sunday afternoon, Texas Gov. Greg Abbott said around 30,000 people remained without power in his state.

"Based upon the speed that I've seen power get restored, I suspect that all power will be fully restored across the state of Texas to every house either later tonight or tomorrow," Abbott said.

The governor said water services were being restored throughout Texas and that more than 3 million bottles of water had been distributed in an effort by the Texas National Guard, US Department of Defense and the Federal Emergency Management Agency (FEMA).

Warmer weather and the return of electricity has provided some relief for Texans, but many remain without clean water or in homes that have been damaged by broken pipes and flooding.

That includes Fort Worth Mayor Betsy Price, a Republican, who told CBS' "Face the Nation" on Sunday that her own home was flooded. She said her insurance will cover the damage, but that might not be the case for other Texans.

During his news conference Sunday, Abbott said uninsured residents with burst pipes could qualify for a FEMA reimbursement.

"We have had FEMA assistance granted by the federal government, and a part of that is individual assistance that will assist individuals whose homes or apartments have been harmed because of the winter storm," he said.

Houston Mayor Sylvester Turner, a Democrat, noted just how widespread the water issues are for many.

"Let me just say right now with so many homes across the city having pipes that burst because of the frigid weather and major leaks, major water damage, we need a lot of plumbing materials and supplies like right now," he said.

"We have a number of licensed plumbers but could use even more," Turner said. "But the main thing is that even when plumbers are going out, it is very difficult to find the necessary materials and supplies."

Additionally, some Texans are facing unprecedented price hikes in their energy bills as a result of the recent storm. Dallas resident DeAndre Upshaw said he got a $7,000 bill from his electric company, which charges customers at a market rate.

Texas' utility regulator, the Public Utility Commission of Texas, said Saturday it is investigating "the factors that combined with the devastating winter weather to disrupt the flow of power to millions of Texas homes."

Abbott announced at his news conference Sunday that the state Public Utility Commission had issued a moratorium on customer disconnections for non-payment to address "skyrocketing energy bills" reportedly being faced by some Texans.

He said the commission would also restrict electricity providers from sending customer invoices at this time.

"Texans who have suffered through days of freezing cold without power should not be subjected to skyrocketing energy bills due to a spike in the energy market," Abbott said.

The governor said he held an emergency meeting with legislative leaders "to shield Texas families from unreasonable bills" due to the winter storms.

"This is something that's being fast-tracked, that legislators are working on as we speak. ... We will have meetings this week to get to the bottom of this but also to provide relief and support to our fellow Texans," Abbott said.

Asked about legislation to fix the power infrastructure in the state, Abbott said: "We will not end this session until the state of Texas is -- and all of its power generation capabilities -- is fully winterized."

In a later statement, the commission said it issued a series of orders "intended to protect Texas electricity customers while leaders in the state consider solutions for the financial aftershocks of the winter storm grid event."

As well as the moratorium, the commission ordered the continuation of a Covid-19 measure under which electricity providers are required to offer deferred payment plans to customers when requested.

"The order and directives are intended to be temporary, likely through the end of this week, to address the potential financial impacts that are especially challenging during this extremely difficult time," said Chairman DeAnn Walker.

The winter weather also caused major delays in Covid-19 vaccinations across the country, but the backlog is just temporary, Dr. Anthony Fauci, director of the National Institute of Allergy and Infectious Diseases, said Sunday.

"The number was six million doses got delayed, we've gotten two million out and we project that by the middle of the week, we will have caught up," Fauci told NBC's Chuck Todd.