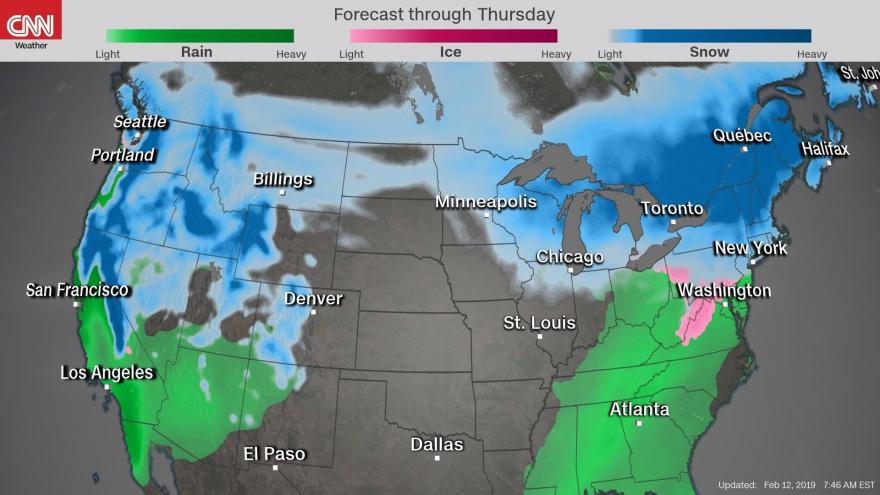 Winter warnings, watches or advisories stretch from the Upper Midwest through western Virginia and up to Maine.

(CNN) -- Severe weather is expected to stretch from coast to coast on Tuesday, with about 75 million people under some sort of winter alert.

Throughout the Northeast, snow earlier in the day transitioned to freezing rain and will eventually become rain.

The metropolitan areas of New York and Boston could see 4 inches of snow followed by a coating of ice. Interior sections of the Northeast could see a foot or more of snow, while the storm is mainly expected to drop freezing rain in southern Pennsylvania and Maryland.

More than 850 flights into and out of John F. Kennedy and LaGuardia international airports in New York had been canceled as of Tuesday evening, according to FlightAware. More than 2,500 flights involving US airports were canceled.

Winter storm warnings or winter weather advisories have been issued across New England through the night. The evening commute could be a tough one for Bostonians, as afternoon snow turns to heavy sleet and eventually rain.

In New Jersey, officials declared a state of emergency in expectation of the weather. Officials closed state offices, banned commercial vehicles on some highways, and restricted speeds to 45 mph on parts of the Garden State Parkway and the New Jersey Turnpike.

"The afternoon commute will likely be a slow slog, as roads will remain slick with any residual ice and freezing rain," New Jersey Gov. Phil Murphy said. "Ice is probably our overriding, collective concern."

Several cities including Chicago, Detroit and Buffalo, New York, could also see dangerous travel conditions as a band of sleet and ice could make roadways treacherous.

A band of heavy snow also will set in over northern Iowa, Wisconsin and Michigan, where residents could shovel away up to 12 inches.

Widespread rain continued to soak the Ohio Valley, from Arkansas to Ohio but it was diminishing by evening.

More snow in the Northwest

Meanwhile, Seattle, which broke its February snowfall record not even halfway into the month, finally saw an end to snow later in the day.

A few inches of snow fell, with heavy snowfall expected just west of town, but the precipitation was turning to rain. Winter alerts also are in effect in the region.

Farther south, the Sierra Nevada mountaintops in California can expect to continue to be pounded with snow over the next few days.