About 15 people, some armed, confronted the wrong black teen. Now an officer is fired 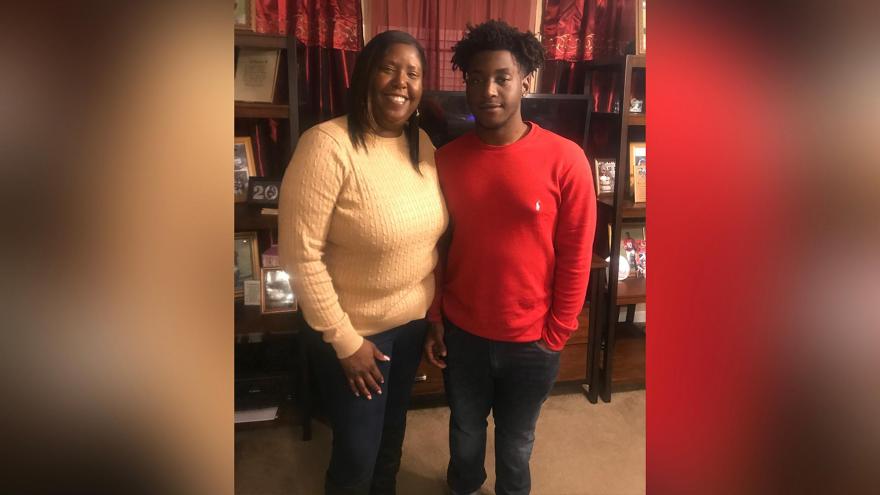 Monica and Dameon Shepard were both home when the group came to the door around 10 p.m. on May 3.

(CNN) -- A North Carolina sheriff's deputy is out of a job and facing charges after he and about 15 other people, some armed, harassed a black teenager they mistakenly believed was involved in a girl's disappearance, the teen's attorney said.

Kita, who the teen's family says wedged his foot in the door when 18-year-old Dameon Shepard and his mother tried to close it, committed the crimes "while armed and in uniform in a county that he was not duly sworn in and in furtherance of personal not law enforcement purposes," the prosecutor said.

Pender County resident Austin Wood, who is accused of carrying a gun in the mob, is charged with going armed to the terror of the public, the police said.

The New Hanover County Sheriff Ed McMahon fired Kita, he said in a statement that David read to reporters.

"Upon hearing of the incident involving Jordan Kita, I immediately began an internal affairs investigation," the Friday statement said. "Today, after speaking with the district attorney and (Pender County) Sheriff (Alan) Cutler, Jordan Kita has been terminated."

Asked why no one was arrested May 3, when the incident happened, Cutler told reporters his office "wanted to make sure the right thing was done."

"Instead of rushing in and making a charge that evening, the situation was defused," he said. "We felt like the threat was over, and this has allowed us ... some time to be able to investigate this situation and make some informed decisions."

David declined to delve too deeply into the facts but urged residents to "please remain calm and to know that committed professionals are going to see that justice is done in a courtroom, not the court of public opinion."

CNN's attempts to reach Kita and Wood went unanswered as of Monday afternoon.

The allegations in the case

Monica Shepard and her son, Dameon, are one of two black families in the middle-class Pender County neighborhood about a 30-minute drive northeast of Wilmington, family attorney Jim Lea told CNN. Her son is about to graduate from Laney High School, and a bright yellow sign reading, "Congratulations, Dameon. We are proud of you!" sits in the front yard.

On May 3, at about 10 p.m., Dameon Shepard was playing video games when he heard a knock at the door. His mother was sleeping. The teen opened the door, Lea said, to find a group of about 15 white people -- mostly men and three of them armed -- on the porch and walkway of his property.

The group "came up like a lynch mob up to the door demanding the Shepards answer their questions," Lea told CNN.

They were looking for another black teen and wanted information about a 16-year-old girl who Lea said had run away from home. At the head of the group was Kita, in uniform, and a man who identified himself as the girl's brother but may have been her father, Lea said.

"Directly behind them were two armed individuals, one with an assault weapon and one with a shotgun," Lea wrote last week in a letter to David.

Dameon Shepard attempted to close the front door on them, but Kita "stuck his foot in the door and refused to let him shut it and kept demanding to come into the home. Dameon became very frightened and hysterical and kept repeating that his name was Dameon," the letter said.

Monica Shepard woke up during the confrontation and ordered her son to go back inside, and Kita and others began grilling her, insisting they be allowed to come in, Lea wrote.

"As she attempted to close the door, (Kita) placed his foot again and pushed against the door preventing (her) from closing it fully. She repeatedly demanded that they leave," his letter said.

The black teen being sought by the group, and the teen's mother, previously lived next door but had moved out of the neighborhood weeks before the incident, Lea told CNN.

The group eventually began to realize they were at the wrong residence, the letter said. The group dispersed but many of them, including the people who were armed, returned when Pender County deputies arrived at the home, Lea wrote.

The deputies made no arrests, despite the Shepards' and some of their neighbors' protestations, and later, a captain with the sheriff's office came by and told Shepard "it was complicated to arrest anyone who had been there the previous night or apprehend them," Lea's letter said.

The deputies hadn't even taken anyone's name, but he'd follow up, the captain told Shepard, according to the letter.

'No one's above the law'

David said he consulted with 10 prosecutors before making his decision to have Kita and the other man arrested. Part of the problem was figuring out where exactly the law had been broken because "not everything that offends us is illegal under the criminal laws," he said.

More arrests could come, he said.

Where Sheriff Cutler said his deputies took their time to "make sure we made an informed decision," David said the sheriff was also dealing with a protocol, put in place years ago by David's office, that prohibits citizens from swearing out misdemeanor warrants against law enforcement officers.

Because officers are so often in a position to be accused of wrongdoing -- and because the integrity of the institution demands authorities "make absolutely certain that no one is wearing the badge who would violate the laws" -- his office requires that a criminal investigation precede any officer's arrest, he said.

"No one's above the law, and no one's beneath its protection, and one thing that we absolutely make certain of is that anyone who's violating the law be treated the same," he said.

David would not say how Kita was related to the missing girl, but he said there was a "familial relation and they're not total strangers to each other."

CORRECTION: An earlier version of this story gave the wrong position for Jordan Kita. He was a New Hanover County sheriff's deputy.