Abortion access under renewed threat in Oklahoma and Missouri 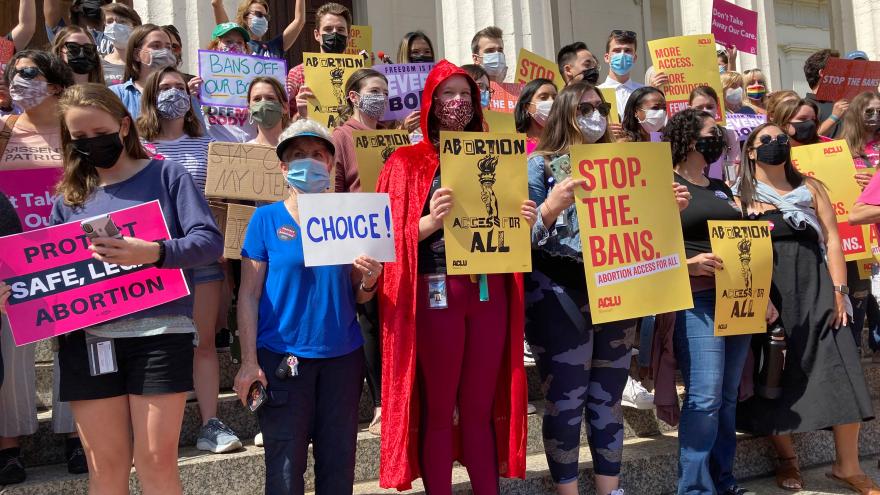 (CNN) -- While abortion rights advocates could secure several victories in US states in the coming days, they're sounding the alarm about an Oklahoma bill that would ban nearly all abortions that's likely to be signed into law. Here are some of this week's moves in state legislatures and by state leaders you may have missed.

Oklahoma legislators passed a bill on Tuesday that would make performing an abortion illegal in the state, except to save the life of the pregnant woman in a medical emergency.

The bill heads to Republican Gov. Kevin Stitt, who has pledged to sign every piece of legislation limiting abortion that reaches his desk.

Senate Bill 612 would make performing an abortion or attempting to perform the procedure a felony punishable by a maximum fine of $100,000 or a maximum of 10 years in state prison, or both. The pregnant person who sought the abortion would not be criminally charged or convicted for seeking or obtaining the procedure .

This week, Oklahoma Republicans also got another step closer to passing the "Oklahoma Heartbeat Act," modeled after a Texas law, which bans abortions around six weeks of pregnancy and allows private citizens to take civil action against abortion providers to enforce the law. It's just one of two copy-cat Texas bills being considered by the Sooner State.

Those opposed to abortion cheered the bill's passage, while abortion rights advocates warned that the measure would create a crisis in the region as out-of-state patients, including a huge increase in the number of Texans seeking abortion, travel to Oklahoma.

The Maryland Democratic-controlled General Assembly voted Saturday to override Republican Gov. Larry Hogan's veto of a bill that would expand access to abortion in the state.

House Bill 937, titled the Abortion Care Access Act, will allow more health care professionals to perform an abortion procedure, rather than only a licensed physician, and set up a state program to train more and to diversify abortion providers.

The legislation will also require most health insurers and the Maryland Medical Assistance Program to cover abortion care services.

The bill will go into effect on July 1, while the bill's insurance provisions will have to be met by January 2023.

Hogan had vetoed the bill on Friday, arguing that the bill "endangers the health and lives of women by allowing non-physicians to perform abortions."

The Missouri House, where Republicans have a more than 2-to-1 majority, passed on Wednesday a broad bill that would ban abortion drugs being sent via mail, defund Planned Parenthood clinics in the state and allow family members to file wrongful death lawsuits in the rare cases of a live birth during or after an attempted abortion when the baby is injured or subsequently dies as a result of the abortion.

A provision in the legislation would also criminalize "trafficking abortion-inducing drugs," saying that "a person or entity commits the offense of trafficking abortion inducing drugs if such person or entity knowingly imports, exports, distributes, delivers, manufactures, produces, prescribes, administers, or dispenses" -- or attempts to do so -- "any medicine, drug, or any other substance to be used for the purpose of inducing an abortion ... on another person in violation of any state or federal law."

House Bill 2012 would enact a Born-Alive Abortion Survivors Protection Act, under which a health care provider would be required to offer the same degree of life-saving care following an attempted abortion that a provider would offer a baby otherwise born at the same gestational age. Other states including Kentucky and Ohio have enacted similar legislation.

According to the bill, a person who commits sexual assault or domestic violence would not be permitted to file such lawsuits or be awarded damages, and neither would that person's household or family members.

The legislative package passed in a 91-37 vote without discussion on Wednesday, and now heads to the state Senate.

A Missouri Senate committee also on Wednesday held a hearing on eight abortion-related proposals, including a bill that would establish the Abolition of Abortion in Missouri Act.

Democratic Gov. Andy Beshear of Kentucky vetoed a sweeping bill Friday that would have banned most abortions after 15 weeks of pregnancy, restricted access to medication abortion and made it more difficult for a minor to obtain an abortion in the state. The legislation does not include exceptions for cases of rape or incest.

The bill, he said, "requires physicians performing nonsurgical procedures to maintain hospital admitting privileges in geographical proximity to the location where the procedure is performed. The Supreme Court has ruled such requirements unconstitutional as it makes it impossible for women, including a child who is a victim of rape or incest, to obtain a procedure in certain areas of the state."

The legislation places a number of restrictions on drugs used in a medication abortion, such as mifepristone. Under the bill, the drug could not be given to a patient without obtaining their "informed consent" at least 24 hours prior, which would include signing a document "created by the cabinet."

It would also amend the law that deals with minors obtaining abortions so that only an attending physician, and not an agent, can obtain written consent, and it would require that the consenting parent or legal guardian "has made a reasonable attempt to notify" any other parent with joint or physical custody at least 48 hours before providing consent.

Despite the governor's veto, the state's legislature can vote to override the veto next week. Republicans hold massive majorities in both chambers.

Democratic Gov. Gretchen Whitmer of Michigan on Thursday sued to challenge the state's nearly century-old abortion ban, which is not enforceable due to Roe v. Wade.

The lawsuit asks the state's Supreme Court to issue a decision on the constitutionality of abortion.

"We've got to take this current assault on women's rights seriously and use every tool we have to fight back. This is not just a theoretical risk. This is a real and present danger. And that's why I filed this lawsuit," Whitmer told "The Source with Kasie Hunt" on CNN+.

According to an official with Whitmer's office, if Roe v. Wade is overturned and the 1931 MIchigan abortion law goes into effect, the Wolverine State would have one of the most extreme abortion laws in the nation.

In a notable win for abortion rights advocates, Nebraska's unicameral legislature on Wednesday failed to advance a bill entitled the Nebraska Human Life Protection Act, which was aimed at banning abortions statewide should the US Supreme Court overturn Roe v. Wade.

Republican state Sen. Joni Albrecht's motion to end debate on the bill she introduced failed by a vote of 31-15, falling short of two votes needed. Lawmakers had debated the bill for about eight hours.

The bill, a so-called trigger abortion bill, would have gone into effect if the US Supreme Court were to overrule Roe v. Wade or if Congress were to enact a law giving states the authority to regulate abortion or if the Constitution were to be amended. It would have banned abortions without exceptions for rape and incest and would have created criminal penalties for physicians who violate the law.

"I'm proud of everyone who stood together to say this ban, and the way the bill was drafted, was wrong," Democratic state Sen. Megan Hunt said following the vote.

As surrounding red states seek to restrict abortion, Colorado Gov. Jared Polis, a Democrat, signed a bill into law Monday that codifies the right to an abortion in the state.

The law also blocks local entities from enacting their own restrictions on abortion.

Planned Parenthood clinics in Colorado saw an increase of more than 1,000% in Texas abortion patients after that state's six-week ban went into effect in September 2021 through the end of the year, compared with previous years, according to Planned Parenthood.