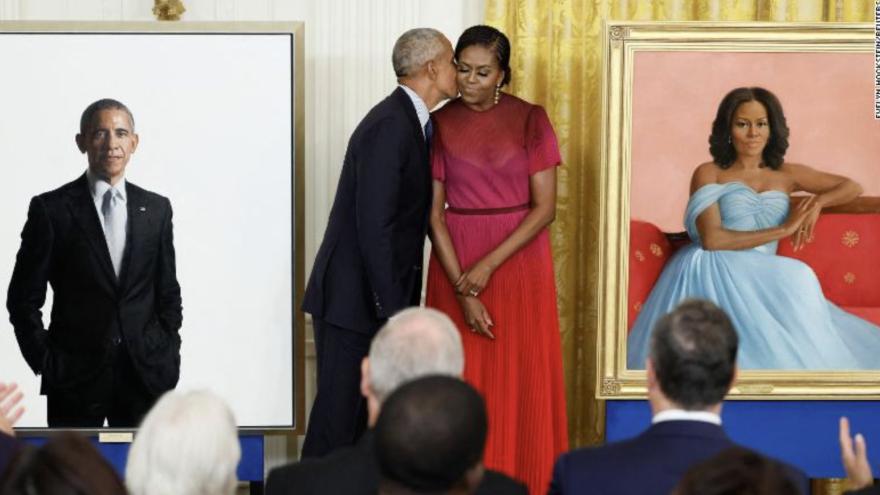 (CNN) -- When artist Robert McCurdy was taking the high-resolution photograph he would use to paint President Barack Obama's official portrait, he had some instructions: No smile, no gestures and look directly into the camera.

"We're not looking for a gestural moment," McCurdy said in an interview recently with the White House Historical Association, which acquires and funds official portraits of presidents and first ladies. "We're looking for a more meditative or transcendent moment."

Years later, those instructions have translated into a strikingly different style of official presidential painting. Unveiled Wednesday in a ceremony in the East Room, the portrait of Obama is a photorealist picture of the former President set against a bright white background.

Wearing a black suit, white shirt and a light gray tie with his hands in his pockets, Obama looks out from the canvas at the viewer with an enigmatic expression. Nothing else disrupts the composition.

"What I love about Robert's work is that he paints people exactly the way they are, for better or worse. He captures every wrinkle on your face, every crease in your shirt," Obama said during Wednesday's ceremony. "You'll note that he refused to hide any of my gray hairs. Refused my request to make my ears smaller. He also talked me out of wearing a tan suit, by the way."

"It feels like you're face-to-face, forming a connection," Obama went on. "That appealed to me, in part because presidents so often get air brushed. They even take on a mythical status, especially after you've gone, and people forget all the stuff they didn't like about you.

After the initial photo was taken from which McCurdy painted, the former President had no say in the final portrait, according to the artist.

"It is part of my process that the sitter doesn't get to say anything about how the painting looks. They're completely outside the process," he said. "He was open to that and accepting of that process, so he never saw the images that we worked from."

Former first lady Michelle Obama was equally hands off with her final portrait after posing for photographs with her portraitist, New York-based artist Sharon Sprung, in the White House.

"I felt this trust come from her, that you do your thing, I do my thing, I'm going to trust you with your thing, and I think portraiture works better sometimes like that. That she didn't contribute that much other than present herself," Sprung told the historical association.

Like her husband's, Michelle Obama's portrait is painted in a distinctive style that breaks a mold of the more traditional portraits hung in the White House. Wearing a powder blue off-the-shoulder gown designed by Jason Wu, she sits on a sofa from the White House Red Room, posing against a terra-cotta backdrop. Like the former President, she stares directly out of the frame at the viewer.

"Your work is phenomenal, but it was your essence, your soul, the way you saw me, the way we interacted, and it shows in this beautiful work," Michelle Obama said during the unveiling ceremony.

The paintings are historic in another way: They capture the first Black president and first lady.

"They do look different. But I also don't think that it needs to be explained to people. I think people seem to get it," McCurdy said.

When the Obamas selected artists for earlier portraits hung at the National Portrait Gallery in Washington, they selected Black painters -- Kehinde Wiley and Amy Sherald -- who at that point were still emerging into the field.

The painters behind the official White House portraits are both are established artists. McCurdy, whose signature is hyper-photorealistic paintings set against white backdrops, has painted Jeff Bezos, Nelson Mandela, the Dalai Lama and Jane Goodall, among others.

Sprung has had a long career in figurative painting, including paintings for Congress, and has a connection to past-White House portraits: When she was younger, she developed an artistic relationship with Aaron Shikler, who painted iconic White House portraits of John F. Kennedy, Jackie Kennedy and Nancy Reagan.

The process of selecting the artists began when the Obamas were still in the White House, including in-person interviews in the Oval Office. Thelma Golden, director and chief curator of The Studio Museum in Harlem, sat in on Sprung's interview with the couple.

Then-President Obama and McCurdy discussed the painting process, including releasing control of the final product to the artist and the connection between viewer and subject that he aims for in each of his paintings.

"I think that directness really appealed to him," McCurdy said.

When Sprung visited the Oval Office during the Obamas' time in the White House for a conversation about the portrait, she brought with her some preliminary drawings of the then-first lady to give the couple a sense of her direction.

McCurdy begins his process by taking about 100 photographs of his subject against a white backdrop. After selecting just one to paint from, the rest of the images are destroyed and a 12-18 month process of painting begins.

All Obama had to do, McCurdy said, was hold his mark and not move.

"He did an excellent job of that," McCurdy said. The former President was "charming" and "very present," he said.

When Sprung arrived to the White House for a sitting with Michelle Obama, she decided to leave her paints behind -- "I didn't want to leave my mark" -- but instead photographed her and chatted as the Obamas' dogs were barking on the lawn.

"I had them move furniture from the Red Room to the Blue Room because the light was better," she explained in an interview with the White House Historical Association.

Sprung is shorter than Michelle Obama; her initial plan to paint the first lady standing up -- akin to official portraits of Jaqueline Kennedy and Nancy Reagan -- ended up shifting when she realized she was looking up at her rather than being at her level.

"I was going to do her standing to give it a certain dignity -- but she doesn't need dignity. She has so much dignity that I decided to do it sitting," Sprung said.

As McCurdy toiled on his portrait of President Obama, it became a challenge to keep the project under total wraps. He doesn't work with assistants, but those who helped print the photographs or happened to walk into his studio were sworn to secrecy.

He also didn't have any additional sittings with the former President. Instead, over the course of the 18-month painting process, the subject became less a person and more a project.

"They become after a year, a year and a half, it becomes more of an object in a way, like a technical issue. I don't feel like I'm really getting to know them as I work with them on the canvas," he said.

For Sprung, Michelle Obama's portrait was the longest she'd ever worked on one painting: Eight months.

"I worked on it day and night. And I said good morning to her, and I said good night to her," she said. The most difficult detail, Sprung said, was not in her face or hands or any part of her body, but her dress.

McCurdy's challenge was in creating a moment "where there's no time," he said.

"There's no before, no after. As if that moment would be the same across a long, like a bell ringing just continues to ring. And it's a way of locking the viewer into the moment," he said.