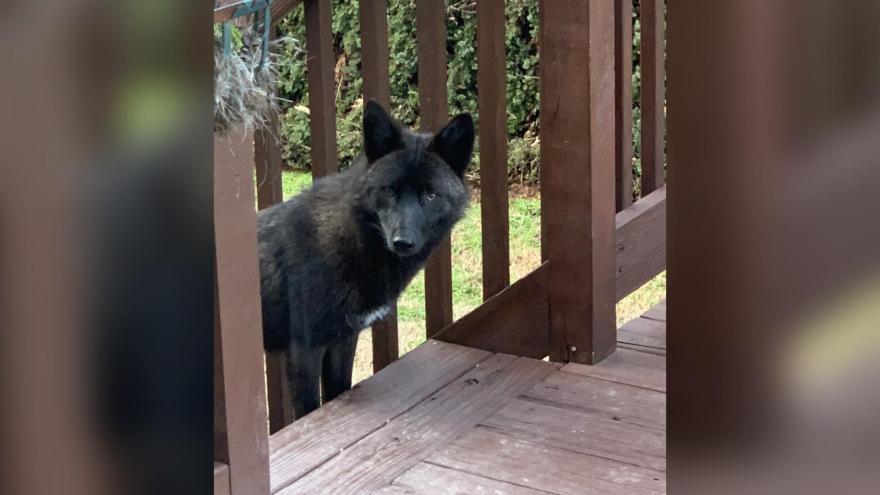 The black coyote went around playing with dogs in Georgia.

(CNN) -- Every day for a week, the strange, happy visitor would drop to play with her Great Pyrenees. She thought Ruth Bader, the dog, had made a new dog companion. Nope, it was a coyote. And the animal was on the lam.

Researchers with the Atlanta Coyote Project told Vanessa Prior, Ruth Bader's human, that they had been trying to track down the rare, black coyote for over a month. It had been spotted around the Smyrna and Vinings, Georgia, areas playing with neighborhood dogs.

"It was very friendly," co-founder of the Atlanta Coyote Project Christopher Mowry told CNN. "It was following people to try to play with their dogs while they were walking them."

The group, which is made up of scientists devoted to learning more about coyotes living in the Atlanta area, first attempted to find the animal when people started to get a little freaked out by it coming too close for comfort.

They figured it was best for everyone -- people, dogs, coyote -- to move the animal to a safer place.

The friendship between a dog and coyote

Prior said she first noticed the new friend last week, when the coyote dropped by her backyard for some playtime.

Since then, "she came every day to play," Prior told CNN. "They would chase each other, play on the pool cover, gently wrestling or nap side by side."

At first she thought it was a wild dog, or maybe a big fox.

But when she posted a photo of the two playing on her Facebook, a friend told her to call a pet rescue center. The group told her the Atlanta Coyote Project had been trying to catch the coyote for months.

So Prior and her friend set up cameras in her backyard to see if the rare animal would come back. Of course it did -- the two animals had become fast friends.

"Because of their friendship and because she kept on coming back to play, they were able to catch her," she said. "They put some traps in the back of my yard and one night she finally got into it."

Prior said she has mixed emotions over her role in the capture.

She's happy the coyote is in a safe place, but feels sad when she sees Ruth Bader looking forlornly for the friend who hasn't returned, she said.

The rescuers took the animal to the Yellow River Wildlife Sanctuary where it will live with another coyote.

"It's not a good situation for a wild animal like a coyote to be interacting with people,'' the Atlanta Coyote Project's Christopher Mowry assured. "They need to maintain a natural awareness to humans and pets and keep to themselves."

Coyote experts will look into the genetics of the friendly animal to try to learn why it was interacting with people. Mowry believes it could have a history with well-meaning humans.

Time will tell how the animal's experiences will translate in its new friendship with another of its kind.