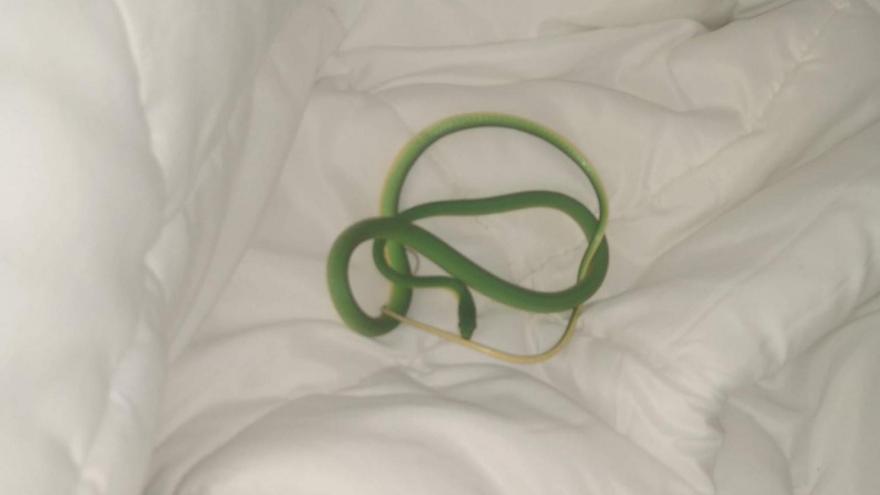 Melinda Major was asleep in her hotel room in Memphis, Tennessee, on Friday morning when she felt something moving around on her arm.

(CNN) -- Melinda Major was asleep in her hotel room in Memphis, Tennessee, on Friday morning when she felt something moving around on her arm.

She was in town from Nashville for a doctor's appointment and at first she thought it might have been her husband, until she remembered he wasn't there with her. When she finally opened her eyes, what she saw was the stuff of nightmares.

A thin, green garden snake was stretched out across her arm.

"I'm not a snake person," Major told CNN. "I can deal with spiders and all the icky things, but snakes are not my thing."

Major said she immediately jumped up and slung the snake off her arm. It hit the headboard and bounced back onto the bed, she said. She then leaped onto the other bed in the room and snapped a picture.

The snake then started moving under the blanket, Major said, so she jumped onto the desk in the room and called the front desk at the Hampton Inn Walnut Grove in East Memphis.

Hotel staff soon came up to her room and escorted her out, and Major said that the manager went back into the room shortly after and called pest control.

Hampton Inn Walnut Grove confirmed the incident to CNN and said that "everything has been resolved."

"It was a scary, scary situation," Major said.

Despite how frightening the incident was, Major said she had stayed at the hotel many times over the years and that she would "most definitely" go back.

"As horrified as I am of snakes, they acted on it quickly," she said. "They were very helpful."