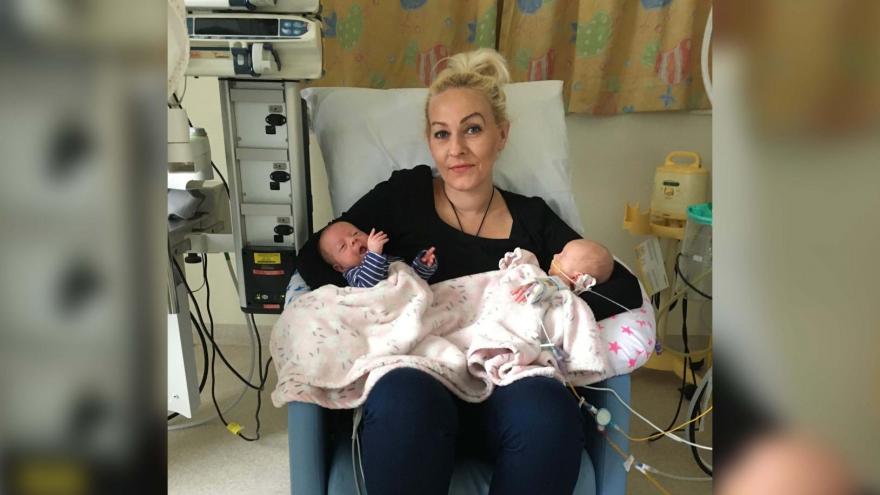 Rachel Broadway travels 70 miles each day to visit her daughter.

(CNN) -- Rachel Broadway travels two hours every day -- much of it by train -- to visit her baby daughter, who was born prematurely in December.

But now, thanks to an unexpected act of kindness from a train conductor, she can at least take the train ride free of charge.

Broadway, who lives in Retford, in the British Midlands, gave birth to twins Ocean and Odin at Sheffield Teaching Hospital about 12 weeks before their due date. While baby Odin was fine, his sister developed a serious condition known as necrotizing enterocolitis (NEC), an intestinal illness that typically affects premature babies.

"Ocean had her third operation and we are waiting to see if she can tolerate a little milk. She's still at the hospital and it will be at least three or six months before she can come home," said Broadway. "Odin, her twin, is fine. He comes with me and sees her every day."

During one of the daily train trips, a conductor who is frequently on that route asked Broadway why she was traveling so often with her son.

"I told her my situation and next thing she told the train guards to look out for me and get my name and address," Broadway added. "Then she asked Northern Rail manager to help me by getting a free pass as she felt sorry for my situation."

Broadway said she managed to find the conductor, Emma Abel, on Facebook. She thanked Abel personally for her act of kindness.

"It was very overwhelming that a stranger can do a humanitarian act as she knew nothing about my life. I felt so grateful and happy," she said.

She would spend up to 30 pounds ($40) a day on the two-hour, 70-mile round trip, which put a significant financial strain on her family. "My partner had to give up work so that I can go hospital every day while he does school run and looks after our 1-year-old," she said.

Northern Railway confirmed to CNN it had granted a pass to Broadway for as long as she has to visit her daughter in the hospital.