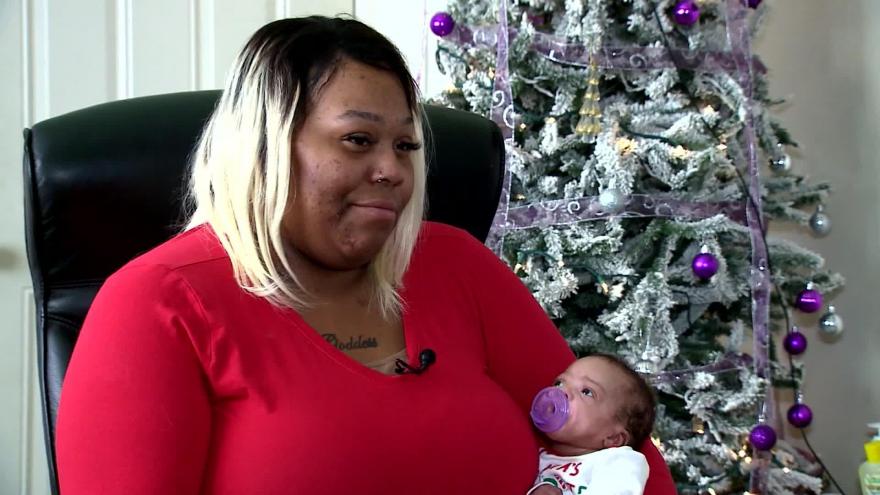 Monique Jones gave birth while intubated due to Covid-19 and nameed her ICU nurse as the baby's godmother.

(CNN) -- A mother who delivered a baby girl while battling Covid-19 is honoring her intensive care unit nurse by naming her the child's godmother.

Monique Jones was 26 weeks pregnant with her second child when she was admitted to Barnes-Jewish Hospital in St. Louis, Missouri on September 4. She was put in the ICU with severe Covid-19 symptoms.

"I wasn't feeling good," Jones told CNN. "I had shortness of breath and I had fever."

Two days later, the 28-year-old was intubated and placed on an extracorporeal membrane oxygenation machine. The ECMO machine, often called the "highest form of life support," uses a pump to circulate a patient's blood through an artificial lung. Jones said she was nervous and scared for the procedure.

ICU nurse Caitlyn Obrock took care of Jones while she was sedated. The nurse said she would whisper words of motivation to Jones on each shift to let her know she was going to make it through.

"With Monique being pregnant, she's only a year older than I am, I just felt, like, a strong connection with wanting her to do well," said Obrock. "She truthfully was a light to me. You know, we have to hold out hope."

Jones said she could feel the positive energy around her as she fought her illness.

"When I was in my hospital bed, I felt some type of positivity around like a guardian angel," Jones told CNN.

When her condition worsened to the point that the medical team was not sure if Jones was going to make it without delivering the baby, they decided to her deliver via an emergency cesarean section, Obrock said.

On September 23, Jones' daughter Zamyrah was born at 29 weeks, weighing only 2 pounds, 5 ounces, Jones said. After the birth, the baby was transferred to the St. Louis Children's Hospital, where she was placed in the neonatal ICU.

Her condition began to improve after the birth of her daughter, Obrock said. On October 1, she was removed from the ECMO machine. Days later she was transferred to a rehabilitation facility, where she had to relearn to walk.

She first held Zamyrah on October 20, nearly a month after giving birth.

While Jones was in rehab, Obrock organized a baby shower for the young mother with gifts for the newborn and $2,000 for Jones and her family.

Zamyrah arrived home from the hospital on December 10 and continues to do well, said Jones.

The connection between Obrock and Jones has continued to grow. The two said they text daily. Jones decided to make Obrock a godmother for Zamyrah as a way to thank her for all her support.

"A godmother to me is like a support system," Jones said. "And I felt like she fought for me."

Jones says she is still recovering from her illness and has set up a GoFundMe to raise money for her medical expenses.