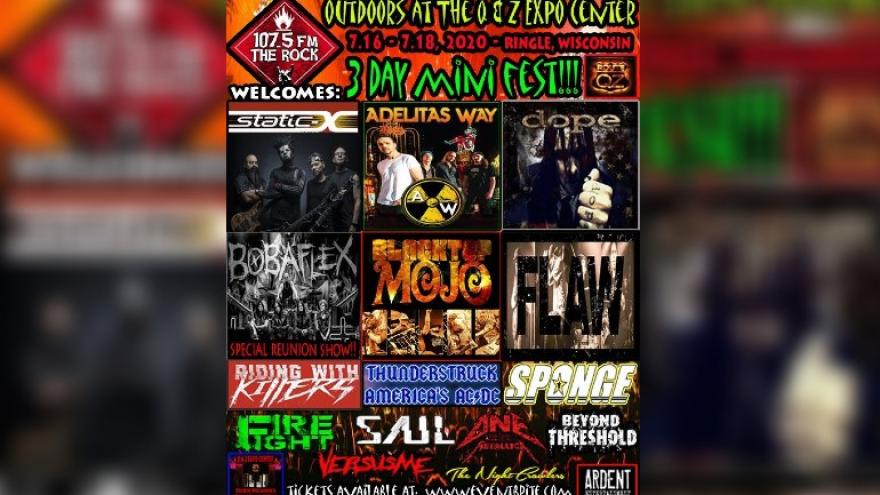 (CNN) -- The organizers behind a Wisconsin music festival called the "COVID Herd Immunity Fest" changed its name this week after they were met with a wave of backlash on social media.

The event, which is scheduled for three days next month in Ringle, was renamed the "July Mini Fest" instead.

At least one band, Nonpoint, pulled out of the event due to the original name of the festival, according to a video a band member posted to Facebook.

The festival, which will showcase 15 bands across three days, comes as bands have turned to a variety of new formats meant to continue performing when nearly all venues and festivals are closed or postponed.

Organizers say the show will go on, despite the rapidly spreading coronavirus that has infected over 26,000 Wisconsinites, and killed 766. Wisconsin is one of the nearly 30 states that are seeing a rise in cases compared to the previous week, according to data from Johns Hopkins University.

The event organizer did not immediately respond to a request for comment from CNN.

Writing on the Q & Z Expo Center Facebook page, organizers said the crowd will be kept small enough to allow social distancing and everyone will be kept outdoors.

"For the record the venues land can accommodate up to 10,000 occupancy," organizers wrote. "This is an OUTDOOR EVENT for 3 Days. We are only selling 20% of that so anyone has the choice and ability to social distance."

On the name, the post clarified, "The Festival is also not called 'Herd Immunity' and the name no longer tied to any of our social media or promotion."

Commenters lamented the media's coverage of the event, with some thanking the bands and others expressing support. A few, however, criticized the venue for moving forward with the event, calling the decision "selfish" and an "incredibly moronic idea."

There is nothing preventing the festival from moving forward after the Wisconsin Supreme Court overturned the state's stay-at-home order in a 4-3 decision on May 13.

The court had ruled that Democratic Gov. Tony Evers overstepped his authority by extending the order, and the governor has said that a new statewide Covid-19 plan would not be implemented after the first proposal was rejected.

With no stay-at-home order in place, events such as the "July Mini Fest" can continue as planned, as it is a private venue and not a public park or campground.

Still, local health officials are warning against any large events.

"The Health Department is in communication with County leaders and the Organizers to discuss what is allowed by county policy," Madison County Health Department public information officer Judy Burrows told CNN. "We discourage any mass gathering or events because of the risk of spread of COVID."