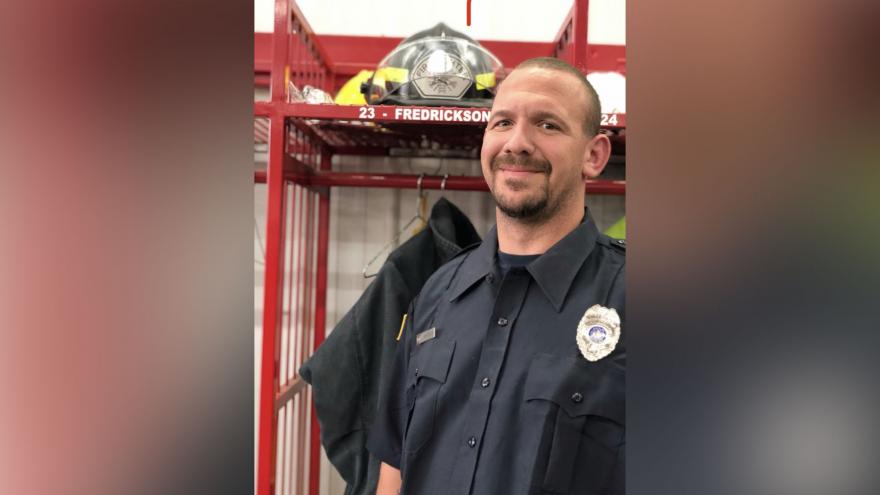 A Wisconsin firefighter is in critical condition after a loaded firearm inside a burning building discharged and struck him, according to the fire department.

CONRATH, Wis. (AP) — Fire officials in Wisconsin say the heat from a fire caused a loaded gun to discharge, critically wounding a firefighter.

The Cornell Area Fire Department said Friday that 35-year-old Justin Fredrickson is out of the intensive care unit and recovering.

A week earlier, Fredrickson was working a fire in the northwestern part of the state when the heat from the fire caused the gun to go off.

Fredrickson was shot in the abdomen.

He was taken to a nearby hospital and later airlifted for medical treatment in Eau Claire.

The department says he had at least three surgeries and has since been up and walking.

(CNN) -- A Wisconsin firefighter remains in critical condition after a loaded firearm inside a burning building discharged and struck him, according to the fire department.

Justin Fredrickson, a firefighter with the Cornell Area Fire Department, was operating on a hose line outside of a fire in the Township of Willard last week when a loaded firearm inside the burning building suddenly discharged. The bullet traveled through the wall of the building and hit him in the abdomen, Fire Chief Dennis Klass said in a news release.

"The loaded firearm discharged due to heat conditions caused by the fire, not by the intentional actions of a person," Klass said.

Frederickson was transported to a hospital, then airlifted to Mayo Hospital in Eau Claire, according to the release. He underwent two surgeries and has a third scheduled.

"Please keep Justin's fiancée, his family, and the Cornell and Sheldon Fire Department's in your prayers," Klass said.