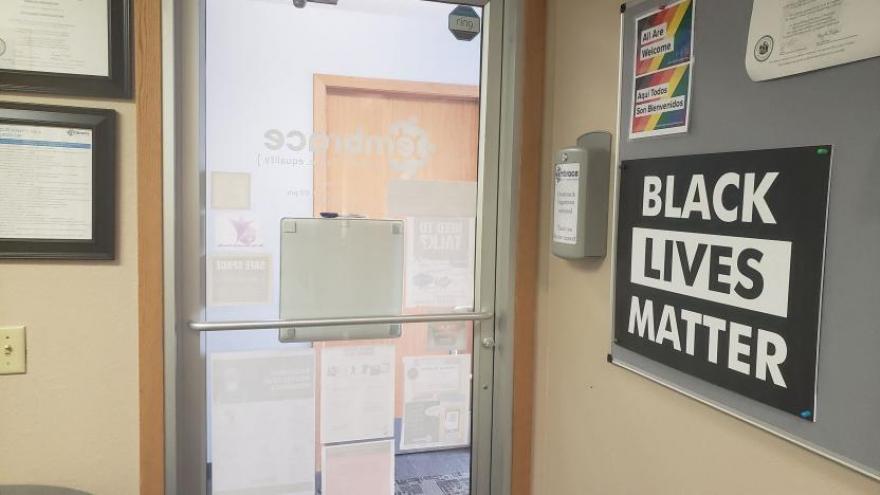 A Black Lives Matter sign is seen inside an Embrace office. More than a dozen law enforcement departments have cut ties with the organization after the signs went up.

(CNN) -- When Embrace, a Wisconsin-based domestic violence shelter, put up Black Lives Matter signs in its offices earlier this summer, employees expected it would prompt tough conversations from people in the community.

Their locations in the state are not too far from where George Floyd died at the hands of Minneapolis police in May -- and the signs were the shelter's gesture of solidarity with the nationwide movement against racial injustice.

Instead of tough conversations, however, the shelter was met with backlash, said Katie Bement, executive director of Embrace.

Bement said the non-profit, which serves about 90,000 people in four different counties in the state, was stripped of $25,000 of its funding from Barron County, and its services with more than a dozen local police departments were dismantled.

"We never expected our funding to be held hostage or to have joint services benefiting survivors dismantled," Bement told CNN.

When Embrace first put the signs up in its offices, Bement said the organization received pushback from local law enforcement, who argued the signs were anti-law enforcement.

In September, Embrace released a statement online addressing its decision to put up the signs.

"As an anti-violence organization, Embrace cannot end one form of violence without addressing the other, and we cannot properly serve all survivors if we do not acknowledge and address the oppression and violence the most marginalized survivors are experiencing," the statement on its website reads.

"Embrace does not support or advocate violence against anyone, even those who are accused of doing harm."

But its message didn't resonate with local officials, Bement said.

In an October meeting, the Barron County Board of Supervisors cut the $25,000 of funding the county had been providing to the organization, money that helped Embrace receive other state and federal funding.

Fourteen of the 17 law enforcement departments Embrace partnered with have also said they're ending collaborative services with the organization in some way, Bement said.

Washburn County Sheriff's Office, among the 17 to end the partnership, issued a statement on Friday.

"The Washburn County Sheriff's Office, as well as all other Law enforcement agencies in the surrounding areas, have ended their partnership with Embrace," the statement said.

"Prior to ending this partnership, we have contacted CRA (Community Referral Agency) and have been provided advocacy information to pass along to victims of abuse. This was done to prevent a gap in advocacy coverage for victims of abuse."

The Spooner Police Department, located in Washburn County, released a similar statement on the same day.

The Barron County Sheriff's Department has said it is continuing to use Embrace but is looking for alternatives.

Barron County Sheriff Chris Fitzgerald said in an interview with a Wisconsin-based online media outlet that he "just wanted (Embrace) to stay in their lane" and not worry about the other social issues.

The impact of dismantling partnerships

She pointed to a homicide prevention program currently in place, where if a survivor calls 911, a screen is done by the officer to determine whether the victim is at a high risk of homicide.

If so, they are immediately connected to an Embrace advocate, who works together with law enforcement to ensure the victim is safe. With this change, she said, that program will no longer exist.

"It's really problematic, because I know that program has saved lives," Bement said.

The timing of the situation also presents a dilemma.

As the Covid-19 pandemic continues to wreak havoc across the country, the virus has led to a surge in domestic violence cases, according to a study from Rutgers University.

Bement told CNN that she has had multiple conversations with local police departments about where Embrace stood, emphasizing that the organization doesn't support violence against anyone. But there "was just a disagreement," she said.

"Embrace really believes that we can't just ignore or accept the existence of racism, ignoring it helps protect or advance racist policies," she said. "We have to be actively opposed."