A winter storm in Hawaii has produced strong winds, high surf, and yes, even snow 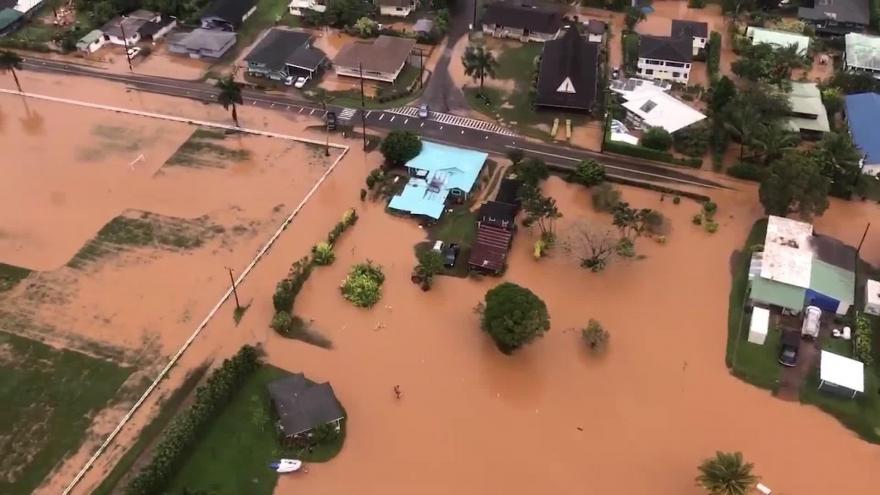 Flooding is also affecting some areas in Hawaii after a strong winter storm hit the area.

Strong winds knocked down trees and branches on roadways and structures and tore down traffic lights and power lines, causing power outages.

The winds could potentially damage roofs and poorly built structures, forecasters say. The powerful winds and a high surf closed some roads and parks.

"Conditions are windy and we do have trees and utility poles and other objects falling onto the street," he said

Hawaii Electric Light said that "due to unsafe weather conditions, crews will resume work when safe to do so. Mahalo for your patience."

Officials at the state Department of Land and Natural Resources reported snow falling at the Polipoli State Park in Maui, and snow is forecast in some other areas as well.

"For perhaps the first time ever, snow has fallen in a Hawai'i State Park. Polipoli State Park on Maui is blanketed with snow. It could be the lowest elevant snow ever recorded in the state. Polipoli is at 6,200 feet elevation," the DLNR said.

CNN Meteorologist Monica Garrett said winds will diminish and weather conditions will improve throughout the day as the "low moves northeast of the area."

"A band of enhanced moisture is expected to move through Tuesday night and Wednesday as the trade winds begin to return, increasing shower coverage and intensity once again."

The National Weather Service in Honolulu issued a wind advisory in effect until noon HST (5 p.m. ET). An advisory means that "sustained winds of at least 30 miles per hour or gusts of at least 50 mph are expected. Motorists should use extra caution."

On Sunday, wind speeds were recorded at 25 to 40 miles per hour and there were reports of wind speeds above 50 and 60 mph.

Speeds in Port Allen in Kauai County were as high as 67 mph and 191 mph at Mauna Kea Summit in Hawaii County.

A high wind warning was in effect for the Big Island summits until 6 p.m. HST (11 p.m. ET) Tuesday. That means winds are expected to be at least 40 mph with gusts over 60 mph in these higher elevations.

At Kapiolani Park in Honolulu, strong winds uprooted kiawe trees said to be nearly a century old, according to KNHL.