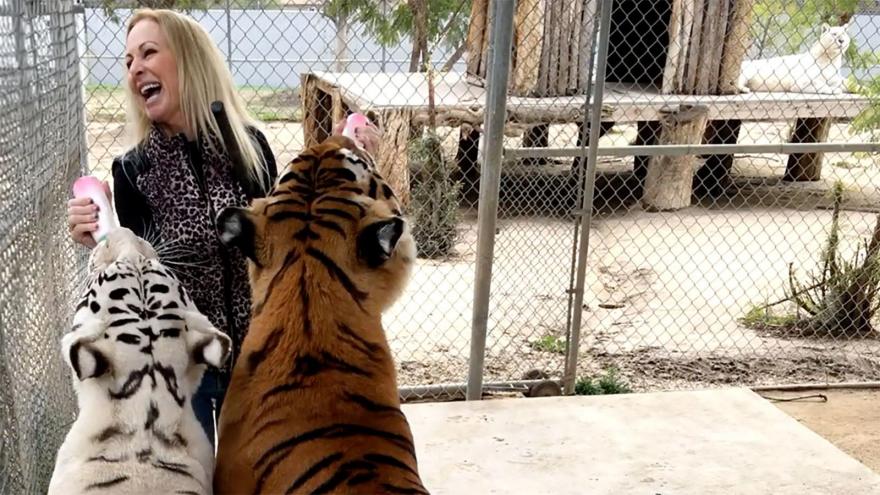 Patty Perry, seen here with two of four tigers at Wildlife and Environmental Conservation Inc., was injured by the animals at an event for the animal sanctuary's donors. She was hospitalized with punctures to her neck.

(CNN) -- A wildlife conservationist and founder of a California animal sanctuary was hospitalized on Saturday after tigers pinned her to the ground and injured her.

Patty Perry, director of Wildlife and Environmental Conservation Inc. in Moorpark, was mauled by several of the park's tigers at an event for the park's donors, CNN affiliate KABC reported.

Michael Bradbury, Perry's friend and the sanctuary's lawyer, said Perry had been hospitalized with punctures in her neck and lacerations -- but insisted the tigers were just playing.

"A lot of people I'm sure that saw it were horrified, thinking the worst," he told KABC. "She said it was obvious they were playing with her because they do love her. She raised them from babies."

Perry entered the cage -- something she does every day, Bradbury said -- when a Bengal tiger wrapped its paws around her legs, knocking her down. Another tiger jumped on top of her, and the tigers pulled on her until event attendees helped her escape.

"It's never happened before," he said. "She's gone in on hundreds of occasions."

Officials are investigating the incident while Perry remains hospitalized, he said. CNN reached out to Wildlife and Environmental Conservation Inc. and is waiting to hear back.

Bradbury said Perry is "heartbroken" about the incident and plans to return to the tigers as soon as she's released.

"It's very difficult for her," he said. "When you love them like your own children and everything, it becomes emotional."

There have been at least 900 reported big cat attacks since 1990, according to Big Cat Rescue, itself a sanctuary for abused big cats that tracks maulings, animal escapes and deaths.

The Association of Zoos and Aquariums does not recommend free contact with tigers except when hand-rearing abandoned cubs. Wildlife and Environmental Conservation Inc. is not a member of the AZA.

Tigers are quick and aggressive by nature. The AZA suggests keepers interact with tigers in pairs to ensure each other's safety and maintain a barrier between themselves and the animals.