A wildfire has destroyed 90% of this town. Indigenous communities have been hit the hardest 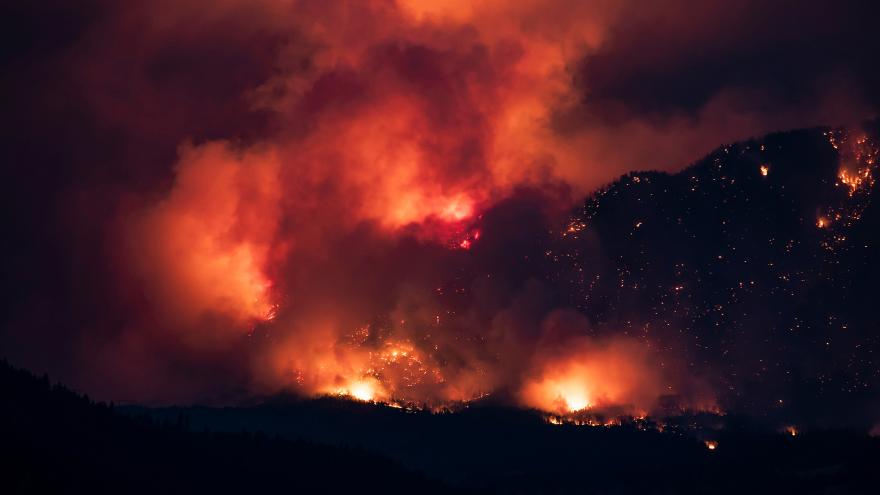 (CNN) -- Schoolteacher Katrina Sam has lived in Lytton in the Canadian province of British Columbia all her life, but a week after a disastrous wildfire, the town she grew up in is almost entirely gone.

Lytton itself is a village of just 250 inhabitants, but over 1,000 people live in the surrounding Indigenous reserves, and the population is largely made up of Indigenous Nlaka'pamux people. IR18 -- the reserve Sam is from -- has been entirely wiped out, save for one fireproof home.

On the evening of June 30, Sam and her husband were relaxing on the couch and watching television before her evening classes when he suddenly got a text from a friend saying there was a fire at the end of town.

They decided to drive down to see what was happening, but the text hadn't prepared them for the gravity of the situation. Their small town of Lytton was in flames -- and they had to leave immediately.

"I got into my vehicle, and at that moment the fire had reached our home," she said. "And it was just the biggest flames I have ever seen. It was just a terrible sight to see how much smoke and flames were already coming to our area."

Despite having managed their homes and surroundings sustainably for over 10,000 years, Indigenous communities have long been victims of climate change, and exploitation at the hands of colonizers. Forest fires are increasingly regular occurrences as temperatures rise, and water and traditional food sources like salmon are consequently more difficult to come by.

And while the Indigenous community has had almost nothing to do with climate change's root cause, the Nlaka'pamux nation says they have been hardest hit, with their very way of life threatened.

In the days leading up to the fire, Lytton had been breaking temperature records in a heatwave during which more than three times the number of expected deaths across British Columbia were reported. Temperatures topped 121 degrees Fahrenheit (49.5° C) and windy conditions created the perfect environment for the wildfire to spread uncontrollably, destroying 90 percent of the town.

'Our beautiful trees are black'

For the Nlaka'pamux nation, Lytton is Kumsheen, or "rivers meeting" and connection to the land is an integral part of their identity. The consequences resulting from the devastation of Kumsheen are therefore far-reaching and incredibly difficult for the community to stomach.

Although Sam's childhood home is still intact, the home she shares with her husband has burned down.

"We lost everything," she said. "Our home is -- it's gone. And my husband worked so hard -- he'd just been diagnosed with cancer, and we've been going through so much. He's still in the process of treatment and trying to figure out what's best for him, and to lose everything ..."

The loss has taken a huge toll on Nlaka'pamux Elders in particular, many of whom have only ever known life in Lytton. Elder George Brown, like Sam, lost his ranch in the fire and watched the destruction of the region he has lived in for 77 years.

For Elder George, the day of the fire started out like any other -- he had just finished watering his tomato plants when his son saw some smoke, and it wasn't long before the fire was "right there" outside their door. He said the fire had left him "traumatized," and he was still processing it.

"There's nothing to go back to because there's no Lytton there," Elder George told CNN. "I've seen some people walking around in a daze when we're all gathered ... My own brother walked past me without even knowing me, he was in shock."

For many in the Nlaka'pamux community, the sense of loss has given way to anger at the provincial and federal government's response.

"We were alone. In the first 14 hours we had zero help," said 20-year-old Patashi Pimms from the Two Mile reserve. "Zero help ... It was everyone just calling someone they knew from other bands. We had zero help from the government."

Edith Loring-Kuhanga, an administrator at the Stein Valley Nlaka'pamux School, said it had taken a long time for First Nations leaders to get in touch with the federal government. She said Acting Chief John Haugen had called the lack of response "ridiculous" and taken it upon himself to get in touch with Prime Minister Trudeau.

"I feel that he should have reached out to us instead of us having to reach out to him when he knew that our entire community was devastated," Loring-Kuhanga told CNN.

According to spokesperson Ann-Clara Vaillancourt from Trudeau's office, the Prime Minister reached out to and spoke to Acting Chief Haugen on July 1.

"No Indigenous Communities will be left behind and we are ready to support with all available resources," she added, saying the government was working with partners to meet the needs of affected First Nations communities.

Pimms also believes the Canadian government finds it easy to ignore Indigenous communities, especially as fires happen "every year" in Lytton but there is still no procedure in place.

"They need to figure something else out. They need to take account of Indigenous livelihoods ... If they can't make money off our land, they're not here for us," she added, suggesting that the impacts of climate changed caused by development in the centuries after colonialism had made uncontrollable wildfires much more likely.

Both experts and community members blame the role of climate change in driving up temperatures in Lytton -- and it has undoubtedly had a disproportionate effect on Indigenous communities.

"These traditional lands and waters are feeding communities," said Dr. Jennifer Grenz, a Nlaka'pamux ecology and climate change scholar and a lecturer at the University of British Columbia. "And so, you know, now that in many respects in many parts of that area that is gone. Traditional hunting areas are gone. We already had struggling salmon populations up there."

Those living in the community have experienced this firsthand, with Elder George saying it was difficult to get water because of forest fires, while Pimms said climate change was affecting Indigenous communities "way more" than non-Indigenous ones.

Authorities are still investigating the cause of the fire, which comes at a time when Canada is facing a reckoning of its past treatment of Indigenous communities. Many within the Nlaka'pamux community believe the fire was created by sparks coming off the railway tracks going through Lytton and operated by the Canadian National Railway (CN).

Elder George, who spent 11 years working for CN, said he was "almost certain" the fire had started on the railway tracks. "I remember some of the people that I used to work with saying that one of these days, there's going to be a spark fly out and it's going to blow," he said.

CN has previously been found guilty of causing a 2015 wildfire that burned more than 2,200 hectares of land near Lytton, and was ordered to pay $13.3 million USD. Local newspaper Victoria News reported that CN, along with the Canadian Pacific Railway, had been asked if it would stop services during the heatwave, but neither had responded. The effects of climate change on forested land are such that in places like Lytton where hot and dry conditions are increasingly prevalent in summer, even a tiny spark can be enough to set off a devastating wildfire.

"We talked about the potential that the movement of rail traffic through these very dry and potentially very dangerous areas could have, and Transport Canada is now working with [British Columbia] officials and the rail companies to address concerns that have been raised," Blair said, Canada's Global News reported.

A spokesperson for CN said the company was "fully engaged" in both the investigation and relief effort, and added, "CN recognizes First Nations' role in land stewardship, and commits to involve them in the reconstruction," promising to engage with leaders from the community on "the timing and the extent of repairs."

For Pimms, who also believes the fire was caused by the railway, this is yet another symptom of Canada's exploitation of Indigenous people.

"I see people slowly changing their mindsets, but within the government itself? I don't believe so," she said. "The government is still fighting residential school survivors in court."

The fire came "just before July 1, which I don't want to call Canada Day. I personally don't celebrate it. The Indigenous community does not celebrate it. So it all happened at a very, I guess, inconvenient time for them," Pimms added.

The long path to reconstruction

For now, even day-to-day life is an uncertainty for the First Nations communities of Kumsheen. Most are checked into hotels that are being renewed on weekly or three-day periods, and so building any kind of long-term plan is proving difficult.

A letter issued to the Nlaka'pamux community on Sunday said they would not be able to return to Lytton until October 15. For Sam, who lost everything, this is in equal parts devastating and a relief -- she doesn't think she can face the prospect of seeing Lytton "anytime soon."

However, Pimms is frustrated by the lack of communication from the government. "If we're only booked in for the next week, where are we going to be until October? Where is that support?"

While they wait, though, the hardest thing for many is coming to terms with the irrevocable loss of their land, and of their homes.

Elder George said that he almost suggested to his wife that they leave Vancouver and return home, before he realized what had happened.

"A little bit of me wants to go home, but there's nothing to go to," he said.