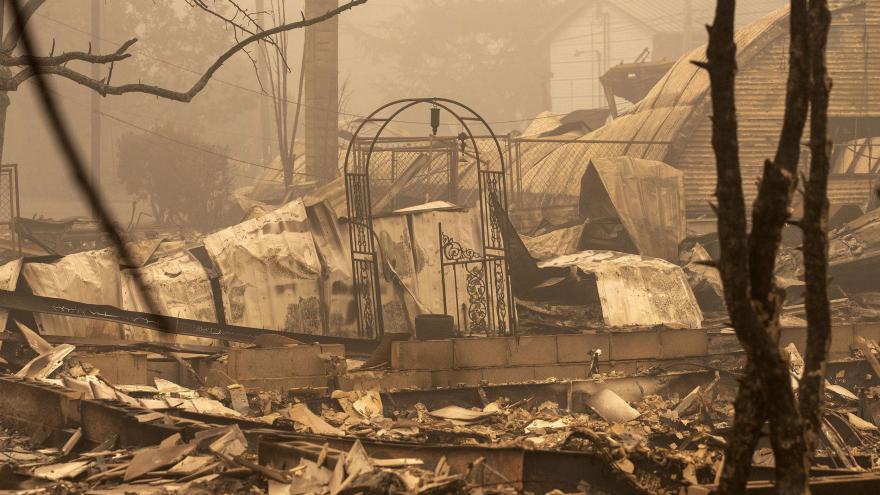 (CNN) -- Patti Candell was amazed to find her house still standing when she returned to Mehama, one of many Oregon towns under evacuation orders as deadly wildfires continue to ravage the state. 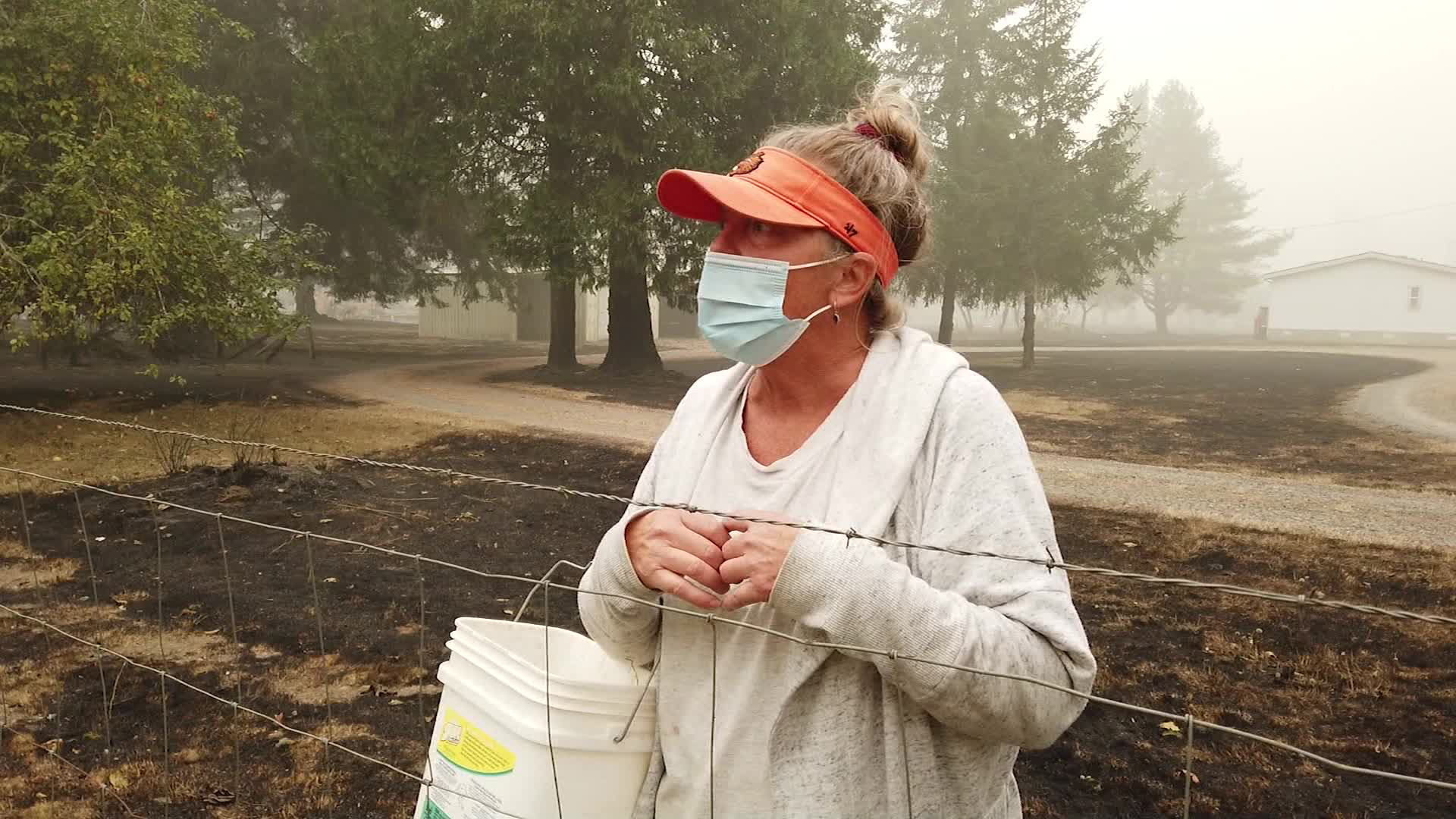 The Beachie Creek Fire, which Candell and her husband fled last week, has killed at least four people, burned more than 188,900 acres and is 0% contained, according to the State of Oregon Fires dashboard website.

Most of the houses surrounding Candell's were destroyed.

Candell said she returned to her home to feed her cows and sheep and found that her horse stable and barn were destroyed, but her animals were alive.

"The barn is, well it's back there, you can see just that pile of white stuff. It's there, it's a big, huge 30-by-48 (foot) horse barn, three stalls and all that fun stuff. And yeah, it was wiped out," Candell told CNN Sunday.

Her house is one of only a handful left in the town.

"The flames actually came up to the house on this side of the home and on the back and how it didn't catch on fire is just amazing to us," she said. "It just, I don't know how the fire works, how the wind is."

The Beachie Creek Fire is the largest of Oregon's five ongoing wildfires that have burned more than 100,000 acres. In all, firefighters are battling at least 13 large wildfires in the state, according to the National Interagency Fire Center's update Sunday.

The fires have burned more than 900,000 acres in Oregon, killed at least 10 people, destroyed hundreds of homes and poisoned the air for millions of residents, turning much of the West Coast's skies a foreboding orange.

Four people died in the Almeda Drive Fire in Jackson County and another four in the Beachie Fire in Marion County. The Holiday Farm Fire and White River Fire have claimed the lives of one person each, according to the dashboard.

Across the West Coast, at least 35 people have died in the recent wildfires including 24 in California and a child in Washington state.

Continued hot weather and strong winds up and down the West Coast have left the area vulnerable to fast moving flames.

The low visibility caused by a combination of fog and smoke led to a delay in deploying additional fire crews to the fire line Anthony Bucher, Line Safety Officer for the Oregon State Fire Marshal's Office told CNN.

"The conditions today are very unique. I mean, we've had fog before, we have smoke, that's very common. The combination of those two today was to such a level that we had actually had to delay some of our crews to get to the fire line this morning," he said. "Because of the driving hazards we actually had to take that into account, which is very unique because we would normally drive slower. But it was that bad this morning. We had visibility down to 10 to 15 feet."

"I've never experienced that before. We were talking about it this morning, before everybody left the camp, that none of us could remember my personal 30 years in the fire service here, can't think of a time like that," Bucher said.

He added that they will always respond to 911 calls but need to be careful with visibility when sending out large resources on county highways.

Bucher told CNN that when crews first arrived in the area of the fire they found people evacuating in vehicles that were half melted, full of people they picked up along the way who had already lost their cars to the fire.

"I personally had two people in the front of my vehicle, getting them out of this area that had been in the river for many hours after running from their home."

In Clackamas County, residents have been told to reconsider their travel plans due to the poor visibility and driving conditions from the fires. They've also been asked to conserve water for firefighting efforts.

"I'm also asking if you live in Clackamas County to please limit your water use. Every drop is needed for our firefighters in order to use the water to save someone's home," Nancy Bush, Director of Disaster Management in Clackamas County, said during a press conference.

Water restrictions are not mandatory at this time, Bush said, but people should think about conserving water and opt not to do things like watering lawns and wash cars.

For those who have been evacuated and are trying to return home another risk exists on top of the deadly fires.

"Please stop that," Roberts said. "It's illegal to stop somebody at gunpoint."

He asked that those groups cease their efforts and call 911 if they see suspicious activity.

"I want to reassure folks about what we're doing," Roberts said. "It's excessively, heavily patrolled area."

The sheriff added that most of the people who have returned to evacuation areas were going to get their personal belongings.

Roberts also said there was one instance where a truck with barrels of gas was reported in the area. It was determined that the truck was making deliveries to homes that use generators.