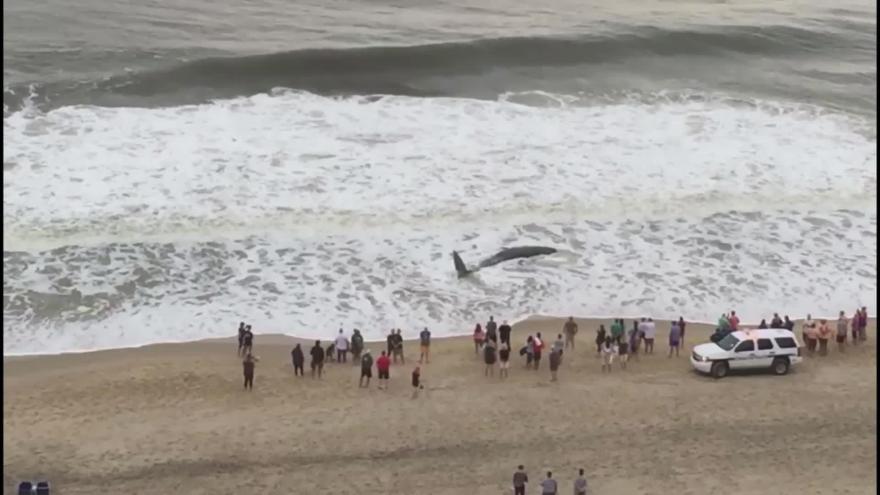 A young whale stranded early Sunday morning on the shore of Ocean City, Maryland, has died, the state Department of Natural Resources said.

The sperm whale was about 15 feet long and had been alive when it came onto the beach Sunday morning, DNR Capt. Melissa Scarborough told CNN.

The National Aquarium in Baltimore had sent a team to the area earlier in the day to assess the animal's condition. The aquarium said in a statement that the juvenile appeared to be "extremely underweight."

Sperm whales spend most of their time in deep waters and have been listed on the Endangered Species Acts since 1970, according to the National Oceanographic and Atmospheric Administration (NOAA).

Whales become stranded most often when they are ill or injured, NOAA says.

In videos, the whale is about half submerged in the water and surrounded by onlookers.

Onlookers tried to push the whale away from the beach, the aquarium statement said.

"I have been watching since 7 a.m.," Barb Carr Moran told CNN. "It has been very sad to watch this beautiful creature die in front of us. The feeling of helplessness is overwhelming."

The Ocean City Beach Patrol told CNN that conditions of the beach Sunday morning included 2- to 4-feet waves and nothing out of the ordinary.

The remains will be removed Sunday and a necropsy will be performed Monday to determine cause of death, the state said.

In Florida in July, crowds of people tried to help rescue crews save five distressed pilot whales in Redington Beach near St. Petersburg. Three of those animals were loaded onto boats and taken out to deeper water. The other two were taken to a local aquarium for further evaluation.