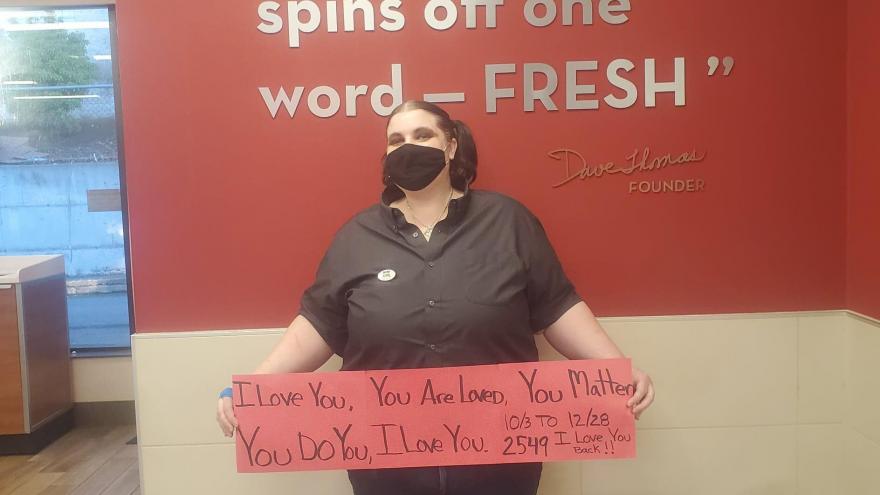 April DiDonna has been telling Wendy's customers "I love you" for three months and thousands have said it back.

(CNN) -- In a year of despair and a world full of hate, one fast food manager is doing what she can to spread a message of love.

April DiDonna told a customer that she loved him after he ordered at the Wendy's drive-thru where she works in Oak Harbor, Washington. Three months later, she's told thousands of people "I love you."

"To know that the little three words could mean so much to so many people, it's overwhelming my heart with so much more love," DiDonna told CNN. "I truly believe that if we just love each other, the world would be better."

The love routine kept going and DiDonna started tallying how many people have said "I love you" back. About 2,700 customers have reciprocated the message since she began counting on October 3, as of Friday before her shift.

Each time a customer completes an order, the assistant manager sprinkles in her love message.

"April is a valued team member at our Wendy's restaurant in Oak Harbor, Washington. Her kindness and positivity inspire us all, and we are grateful for the joy that she brings to our customers and restaurant team," he said.

Sometimes people are a little weirded out by hearing her message through a drive-thru speaker, DiDonna said.

"Sometimes people are unsure," the 35-year-old said. "Then I kind of just explain it. If people can hate for no reason, why can't I love?"

Usually, people see her point and many of them say "I love you too," she said.

Her message can change someone's day

Other times, the positive message changes a person's day more than anyone would know, DiDonna said.

One time an elderly woman asked to speak with the voice behind the message. When DiDonna went to the window, she saw the woman crying.

When DiDonna said she asked the woman if she was OK and what was wrong, the woman simply thanked her.

"Thank you for telling me that you loved me," DiDonna said the woman told her.

The customer told DiDonna that her husband had passed away and her brother had recently died. "I don't have anyone to tell me that they love me anymore and there is no one there to give me a hug," DiDonna said the woman said.

DiDonna, a widow herself and a mother of three boys, asked the woman to pull forward to the store's door. She asked if she could open the car door and then she hugged the woman.

"When I gave this woman a hug, she just melted in my arms and she just started crying," DiDonna said. "I told her that if she needs to be told that she's loved to come back, and I'd give her a hug anytime she wanted."

Since hugging her on October 2, DiDonna said Peggy has been back to the Wendy's about five times. More hugs have been shared.

She found the light after a time of darkness

Peggy's story was echoed in the Facebook comments on the story first reported by local newspaper Whidbey News-Times.

"We love stopping through there when we're up on the north end and she makes us smile every time!" a woman commented on the paper's Facebook page. "Love you too April! You're the best!"

There was a time, however, when DiDonna was in a dark place, she said. Her husband died in 2019 and her "life just turned upside down," she said.

These days DiDonna tries to share her message of love with strangers daily, whether it's at the Wendy's, when she is walking down the street or when she's at a store in town, she said.

Nowadays, some customers tell DiDonna they love her before they even order, she said.

"I love the people that I see every day," she said. "There's just so much love now that I have that it's overflowing from me onto others."

For anyone left scarred by the many woes of 2020, DiDonna has a message of light.

"2021 is going to be a great year," DiDonna said. "The universe is changing. Everything's aligning."