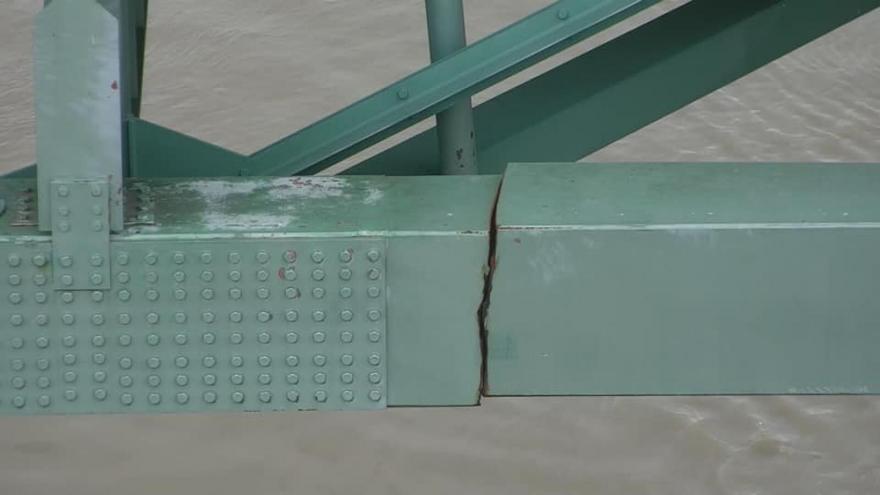 The Tennessee Department of Transportation in May released photos of the crack that shut down the Hernando DeSoto bridge.

(CNN) -- A major bridge connecting Memphis, Tennessee, to Arkansas reopened to traffic in both directions on Monday afternoon, nearly three months after a crack forced its closure, the Arkansas Department of Transportation announced in a tweet.

The Hernando DeSoto Bridge, which carries Interstate 40 over the Mississippi River, was shut down for repairs May 11 after a routine inspection found a structural crack.

The 3.3-mile bridge was built in the late 1960s to early 1970s and, as one of only two Mississippi River crossings in the Memphis area, carries about 60,000 vehicles daily, according to the Tennessee Department of Transportation.

The crack was discovered within the elements of a steel box beam, the state said.

The Tennessee Department of Transportation said in a news release last week that repair workers were expected to have finished their work by Friday. All eastbound lanes had been expected to reopen at 6 a.m. Monday once workers removed their equipment and platforms from that side, followed by the westbound lanes.

The equipment removal was expected to happen one side at a time because this is "the safest scenario for the workers," the release reads.

"We know having the bridge closed has been incredibly inconvenient," TDOT Commissioner Clay Bright said. "We appreciate the public's patience while our team made the repairs and performed extensive inspections to ensure its structurally sound for many years to come."

Both Arkansas and Tennessee share responsibility for the bridge, as ARDOT handles inspections and TDOT handles repairs, they said in a statement.

"Back in May, we speculated that it would be the end of July, first of August to work through all the phases needed to reopen the bridge," Bright said.

"We did not know then what all would be involved, but what I do know is we have all been fortunate to have had a great team that personally took on this project and worked tirelessly to safely reopen the bridge as soon as possible."