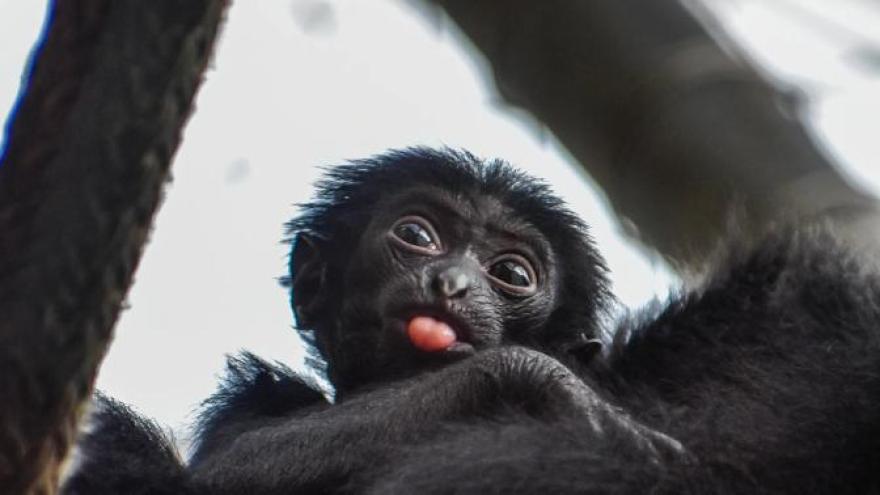 The Virginia Zoo's newest addition to its clan of endangered siamangs will be named by a member of the public through an auction.

(CNN) -- The Virginia Zoo welcomed the birth of an adorable, endangered ape -- and they're offering the public the chance to name the rare primate.

The baby siamang was born on June 26 to parents Malana and Bali, according to a news release from the zoo.

Siamangs are black-furred, tree-dwelling primates found throughout the forests of Indonesia, Malaysia and Thailand, according to the Smithsonian National Zoo. The apes are endangered due to habitat loss and poaching for the illegal pet trade. Hunters kill adult siamangs so that they can sell their infants as pets.

The 6-week old is "bonding well with mom, is reaching out with its hands, and figuring out what its hands and fingers are," the Virginia Zoo said.

The sex of the baby is still unknown, so the zoo is soliciting gender-neutral names through an auction. The naming auction opened on Monday and will continue until August 19. Funds raised through the auction will go toward the zoo's conservation fund, according to the release.

"A siamang birth is an important addition to this critically endangered lesser ape," Greg Bockheim, the zoo's executive director, said in the release. "And watching a baby grow and engage with its family is special for all of us."

The baby's father, Bali, is the largest and oldest siamang at the zoo, clocking in at around 33 pounds and 18 years old, according to their website.

The primates use unique sounds aided by their inflatable throat sac to communicate with their families. Baby siamangs typically stick around with their parents until they're around 6 to 8 years old, when they're ready to start a family of their own, according to the zoo.