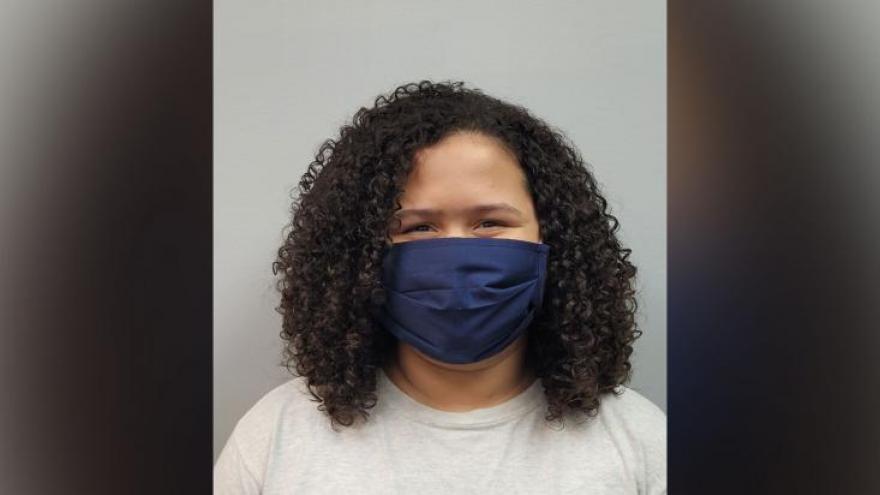 Knowing that she was surrounded by immunocompromised people, Teresa's parents said she knew that she had to wear a mask anytime she went outside to play with a friend or while at school and around others.

(CNN) -- A Virginia family is trying to process how their 10-year-old daughter went from being perfectly healthy to dying in five days from Covid-19.

As they process their abrupt and profound loss, their message to Covid non-believers is simple and direct: have compassion for others. If sharing their daughter Teresa's story changes one person's mind about getting vaccinated against Covid-19 or wearing a mask to protect others, they say they have done right by their daughter.

Teresa attended school at Hillpoint Elementary School in Suffolk, 20 miles outside of Norfolk, Virginia, where there is a mandatory mask mandate in place. Her parents, Nicole and Jeff Sperry are vaccinated along with their two older sons. Teresa and their youngest 9-year-old son were not yet vaccinated but were eagerly waiting to become eligible.

On Sunday evening however, Teresa developed a nagging cough, so bad it forced her to throw up, so Nicole took her to a local emergency room where she was tested for strep throat, which came back negative, as well as a Covid but those results were pending.

"They did her chest X-ray and when they came back, they said that there was no signs of Covid pneumonia, her lungs were perfect, beautiful. They didn't seem concerned," Nicole said. So they went home and Teresa continued to quarantine.

Within 24 hours, she stopped breathing and was rushed to a local hospital and ultimately transferred to Children's Hospital of The King's Daughters (CHKD) Norfolk where she died.

On Monday, as Nicole sat next to her child's lifeless body in the emergency room, trying to make sense of how quickly they had lost their beloved daughter, less than 10 miles down the road in the school district where Nicole teaches, a two-hour school board meeting took place where parents advocated for the district to drop its mask mandate. Comments like, "We didn't know anything about Covid at first, but now we do, we know it's (Covid) nothing to be afraid of if you're healthy," and "Covid is effectively over," can be heard on camera during the meeting.

"At the same time that I was at my daughter's bedside, Chesapeake Public Schools was having a school board meeting and I had friends come back and tell me later, that while I was sitting next to my daughter, who was no longer with us, there were adult parents there basically saying Covid is over and healthy people don't die, especially kids," Nicole said.

"And I'm sitting there next to my dead daughter who was perfectly healthy, who's a child who did everything she was supposed to do."

Apart from a broken bone in her arm when she was younger, Teresa was a healthy 10-year-old social and happy girl, who never had the flu or even an ear infection, Nicole said.

An avid reader, smart, beautiful, loving and always open to helping and taking care of others is how Jeff described his daughter, but it was that helping nature the couple believes may have contributed to her death.

"One of the things she told us before she got sick, was that her job was to be the 'class nurse' to take the sick kids from the class to the nurse's office," Jeff said. "And you have to understand my daughter, this is who she is, helping people is my daughter, it's not something that she wouldn't have wanted to do."

At Hillpoint Elementary School, the protocol is for the classroom teacher or an adult to contact the main office with a "Code C" if a child is feeling ill and one of the administrators, or a school nurse will come to the classroom to pick up the student, Dr. John B. Gordon, III, Suffolk Public Schools Division superintendent told CNN last Thursday.

"We are still investigating to ensure that this process was followed with fidelity," he said.

"Our daughter was perfectly healthy, Nicole wrote on Facebook. "And would have continued to be here if people would have stopped sending their sick kids to school."

After spending some time in virtual learning last year, Nicole said Teresa was eager to return to the classroom this school year.

"Every kid grows up saying 'I hate school' and they're (The Sperry children) the first generation of kids that have grown up and now say 'I wish I was at school, I missed school, I miss my friends,'" Jeff said.

In Teresa's classroom specifically, there have not been any cases of Covid, Gordon told CNN.

"There were zero cases before the tragedy with Teresa, and there are zero cases as of my communication to you. Contact tracing is still currently underway."

While the number of children who tested positive for Covid-19 declined slightly, children made up a greater percentage of the total new US Covid-19 cases in the most recent week over the previous week, accounting for nearly 27% of all cases reported nationwide, the American Academy of Pediatrics reported Monday.

'Covid is real and it doesn't care who it takes'

Six of those deaths occurred in the 0-11 years of age category and seven in the 12-19 category, she said.

"People, they need to step up and take this more seriously," Nicole said. "It's about showing compassion for others. It doesn't take much to wear a mask or get vaccinated if you are medically able."

In a letter to families of students at Suffolk Public Schools on Tuesday, Gordon announced Teresa's death, but did not name her.

"I am her mother and this sorry excuse of a letter should not have been released without at least a phone call from him," Nicole wrote on Facebook. "I will not hide anymore. My beautiful girl was taken from me because people are too damn selfish to care about what could happen to others. I wasn't. We weren't. We wore our mask because there are too many in our tribe who are at risk. My daughter was not at risk. And now she is gone."

"Suffolk Public Schools is heartbroken due to the tragic loss of one of our students, Teresa Sperry," Gordon said in a statement to CNN Thursday. "It is our intention to support the family, the school, and our entire school community during this very difficult time.

"We will continue to follow our mitigation strategies of wearing masks, washing hands, and practicing social distancing. The school division also encourages vaccinations of both staff and students (if they are eligible)."

A friend set up a PayPal fund to help cover the unexpected funeral expenses, which The Sperrys say will be planned after Jeff finishes quarantine.

"We did everything we could have done and now we've lost a part of our hearts, Nicole wrote on Facebook. "Covid is real and it doesn't care who it takes."