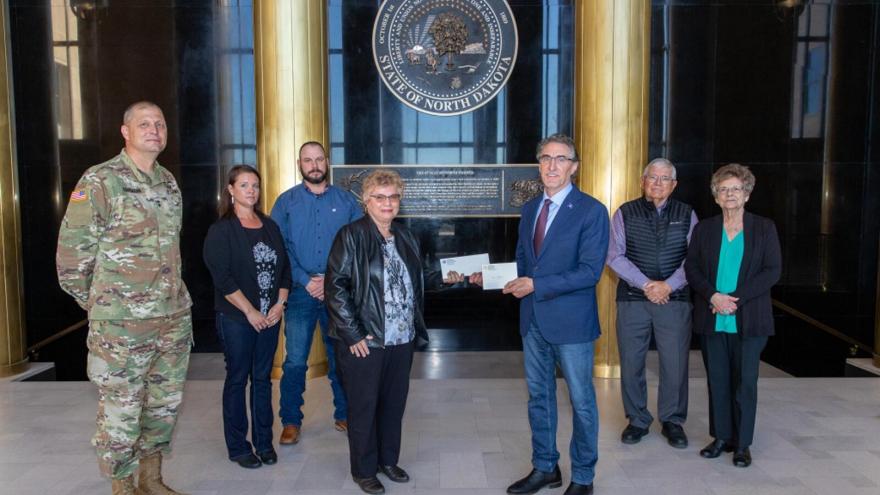 (CNN) -- An Army veteran's dog tag was returned to his widow more than 50 years after he was wounded in the Vietnam War, after an American citizen found it in Russia.

North Dakota Gov. Doug Burgum presented the metal identification tag to Ruth Hepper on Wednesday at the state capitol in Bismarck. Her husband, Ronald D. Hepper, died in 2007 at age 58, according to a statement from the governor's office.

"He would have been thrilled," Hepper, 71, told CNN. "He had once said to me that it would be interesting if he could ever find them."

Ronald Hepper, who was nicknamed "Cowboy" by his fellow soldiers, volunteered for the draft after graduating high school and served in Vietnam with the Army's 196th Light Infantry Brigade, according to the statement.

He kept a set of dog tags in his boots, which were blown off his feet on June 11, 1969, by an exploding hand grenade, the statement said.

Hepper was airlifted to a hospital and when he woke up, he found out his boots and the ID tags were gone.
Doctors were able to save his shrapnel-filled legs, but he spent three months in an amputee ward, the statement said.

Hepper received the Purple Heart for his injuries and became a rancher in Isabel, South Dakota, after his service. He and Ruth were married for 35 years and had three children, she said.

She said he suffered from PTSD and didn't really talk much about the war or about the night he was injured.

They had moved to Bismarck before he died so they could be closer to their youngest daughter.

Hepper said she'd searched online lists to see if anyone had found the tag, but never saw his name.

How the tag got to Russia is a mystery, but an American bought it from a Moscow street vendor and turned it in at the US embassy. It was then sent to the US Department of Veterans Affairs, which contacted Burgum's office, the statement said.

"We are eternally grateful for the courageous service and sacrifices made by Ron Hepper and all North Dakotans who proudly served their country in the Vietnam War, as well as their families, especially those whose loved ones never came home," Burgum said in the statement. "While we wish we were able to return these tags to Ron himself, we are thankful for the opportunity and tremendous honor to present this keepsake to Ruth on behalf of a grateful state and nation."

Hepper said she plans to pass the tag on to her son, who also has two boys.

She says she doesn't know anything about the person who found it.

"I would love to know who found it in Russia and turned it in, but we have no idea," Hepper said. "It's just been very emotional and just very touching that this all transpired the way it did."