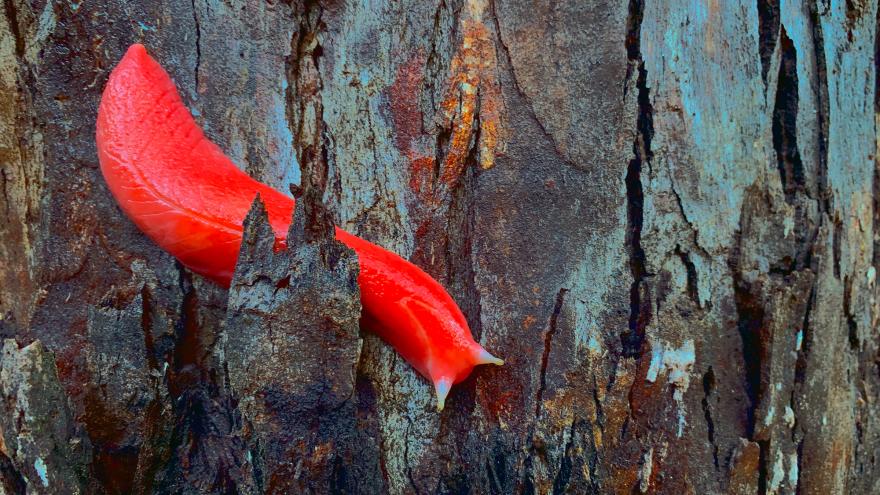 (CNN) -- A bright pink slug species, found only on one mountain in Australia, has survived the devastating bushfires that ripped through much of its habitat.

The unique, eye-catching creature only lives on the slopes of an isolated inactive volcano in New South Wales, Mount Kaputar, from which they take their name.

After recent rainfall, rangers from New South Wales National Parks and Wildlife Service found "about 60" Mount Kaputar slugs alive, according to a recent post on the organization's Facebook page.

The survival of the Mount Kaputar slug comes after ecologists at the University of Sydney estimated that around half a billion animals in New South Wales alone have been affected by the bushfires.

The Facebook post added that there had been fears for this "unusual species" after the fires impacted "much of its alpine habitat." "They may not be as cute as koalas or wallabies, but this species also plays an important role in its ecosystem," the post said.

The Mount Kaputar slug, measuring up to 20 centimeters (7.9 inches), went mostly unstudied until 2013, when it was identified as a new species. Researchers had previously thought it was a variation of the red triangle slug, also found in New South Wales.

The slugs have never been spotted anywhere but the summit area of Mount Kaputar, located in the state's northeast. The effects of a volcanic eruption on the mountain 17 million years ago kept that small summit area wet and full of greenery, as other areas of the country changed to dry desert-like conditions -- meaning the animals living on the mountaintop were marooned for millions of years, unable to live anywhere else.

But these species are under threat -- including the pink slug, listed as Endangered on the International Union for Conservation of Nature (IUCN) Red List of Threatened Species. Their high-elevation habitat is especially vulnerable to the effects of climate change, and may shrink as temperatures increase, according to the IUCN.

Frank Kohler, senior research scientist in malacology at the Australian Museum, told CNN that Mount Kaputar National Park is home to about 20 endemic species of slugs and snails, and is known to be an endangered ecological community.

Kohler said: "This is good news that they've found these slugs. They give us hope that maybe the impact of some of the fires are not as great as we thought."

However, he acknowledged that the park was not among the "more severely affected" areas of the Australian bushfires and can only provide "just a glimpse" of the overall picture of devastation.

Kohler also cited the survival of the Wollemi pines, a prehistoric tree species in a national park near Sydney, as another rare piece of positive news.

Speaking about the slugs, Kohler said that they, like many other species, have evolved to deal with fire. In their case, they would have retreated into "protective crevices," such as rocks.

Although their main food source -- fungi and lichen -- will have been affected by the fire, Kohler believes that these will grow back "relatively quickly" under the right conditions.

Mount Kaputar National Park is currently closed to members of the public because of the damage caused by bushfires.

Since the fire season began in late July, large swaths of Australia have been devastated by the worst bushfires in decades.

More than 20 people have been killed and millions of acres of land have been destroyed. The state of New South Wales is the worst-affected state, with thousands of homes destroyed or damaged.

Ecologists at the University of Sydney estimate that more than 1 billion animals have been impacted across Australia -- meaning killed, displaced, without food or shelter, or otherwise affected.

That number is likely to be even higher in reality, as these estimates don't include insects, frogs, and other invertebrates.

"It's a monstrous event in terms of geography and the number of individual animals affected," said University of Sydney ecologist Christopher Dickman in a news release. "It's events like this that may well hasten the extinction process for a range of other species. So, it's a very sad time."