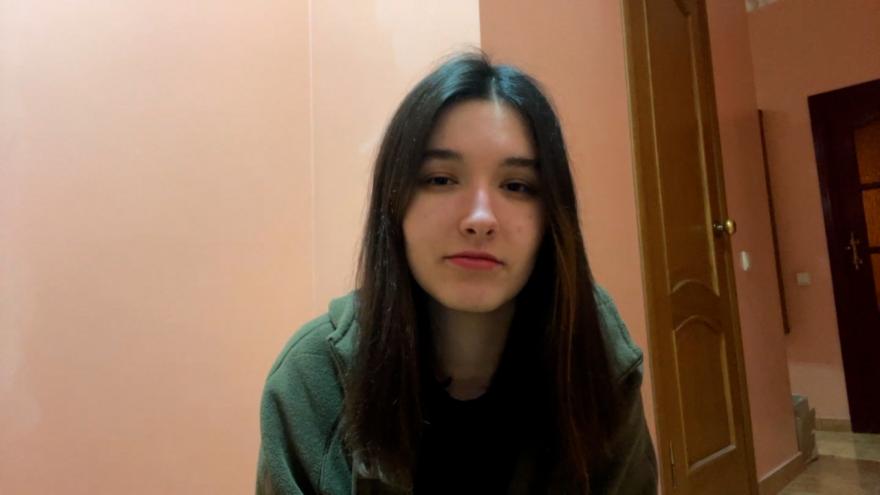 (CNN) -- Sirens blare in the distance. Everywhere she looks, there's devastation. Windows are cracked and pieces of wood and building debris lie scattered in the streets. The streets are eerily empty.

This is the scene that Ukrainian photographer Valeria Shashenok witnesses every day when she walks down the street in war-torn Chernihiv, Ukraine. Shashenok is taking shelter in an underground bunker with her mother, father and dog "Tory" in the northern Ukrainian city. Her close friends have already fled.

But instead of wallowing in the destruction around her, Shashenok has turned the war into art.

Shashenok is using TikTok to document her daily life. Her videos have gone viral, some getting millions of views.

In the video that made her famous, Shashenok dances to "Che La Luna" with the caption, "My typical day in a bomb shelter." She uses a heat gun like a hairdryer as her dog hides under a blanket. Her mother cooks over a pot on the floor.

In another video, Shashenok stands before a pile of rubble. The caption says, "Today Putin destroyed one of the old building(s) in my city. It was a cinema that survived World War II." Then she shows large windows nearby, the glass shattered on the ground. "Windows flew out from the force of impact in neighboring houses too."

In yet another, she shows the bare shelves of grocery a store with the caption: "If you want to buy food in a supermarket during the war in Ukraine."

When asked by CNN's Pamela Brown on Sunday why she started posting these videos on Tik Tok, Shashenok said, "I feel it's like my mission to show people how it looks in real life. That it's real life, and I'm here."

She continued, "Many Russian people write me that we are with you. ... In Russia, (there is) a lot of fake news. And most of the people don't believe that in my country we have a war. ... My mission (is) to show (the) whole world that it's happen(ing) now in real life, and you can see now (the) war (o)n Tik Tok."

Tik Tok announced Sunday that it would suspend some features in Russia in light of the country's new "fake news" law penalizing misinformation.

But even with growing stardom, Shashenok is worried about the fate of her country. "Every day I live with a hope that tomorrow war will end, but everything is getting worse." Shashenok wrote to CNN's Meanwhile in America on Sunday. On Monday, she wrote to CNN, "Everyone is scared (for) their life."

In recent days, hopes for opening up safe evacuation corridors for civilians out of a number of cities, including Chernihiv, have been repeatedly dashed, with Ukraine accusing Russia of attacking escape routes.

Like many people in Ukraine, Shashenok's family is hesitant to leave as evidence grows of Russian violence against Ukrainian civilians. Asked by CNN on Monday whether she and her family would attempt to flee during a planned ceasefire, Shashenok said, "If Russian troops will not kill civilians tomorrow, yes I will go on (the) 9th (of) March." Asked again Tuesday, Shashenok said her family had no plans yet to leave the bunker.

Even with the fear of encroaching violence from Russia, Shashenok still has big dreams. She told CNN on Monday that Tik Tok is her future now.

"Maybe I (can) come to (the) United Stated and work like a Tik Tok journalist," she said.

Hope for a new life and a new beginning is what keeps Shashenok going. "People need to value freedom. It's the most important (thing) we have."