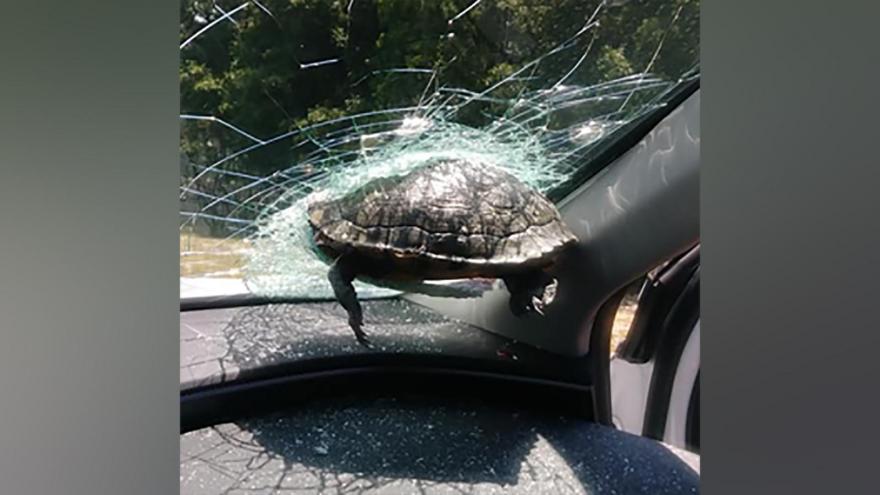 The turtle died after crashing into the windshield of a car

(CNN) -- A woman in Georgia was left shell shocked when a turtle went flying across the highway and through her windshield, nearly striking her passenger in the face.

Latonya Lark was driving along Harry S. Truman Parkway in Savannah with her brother, Kevin Grant, on May 19 to run a few errands. In a split second, the pair found themselves face to face with an unlucky turtle.

"I saw out of the corner of my eye what I thought was a brick," Lark told CNN. "I told my brother, 'Oh my God there's a brick flying across the highway.' No sooner than I said that, it impacted my vehicle. It scared me so bad, it sounded like a bomb went off and glass went all over my brother."

If she hadn't slowed down when she did, the turtle may have gone entirely through the windshield and hit her brother in the face, "probably decapitating him," the small business owner said.

"I just remember shielding myself while my sister screamed my name," Grant told CNN. "After the turtle hit the glass, she was literally in shock and kept driving. I was the one covered in blood and telling her to calm down and call 911."

Fortunately, Grant only suffered from minor cuts from the broken glass. The turtle, however, was met with a much more unfortunate fate: it died.

The Chatham County Police Department told CNN affiliate WSAV they are unsure how the turtle ended up airborne. The siblings suspect another vehicle struck the turtle, and it ended up soaring across the other side of the highway.

"We're so grateful because this could have been fatal," she said. "But the really sad part is that the turtle died. That was really upsetting."