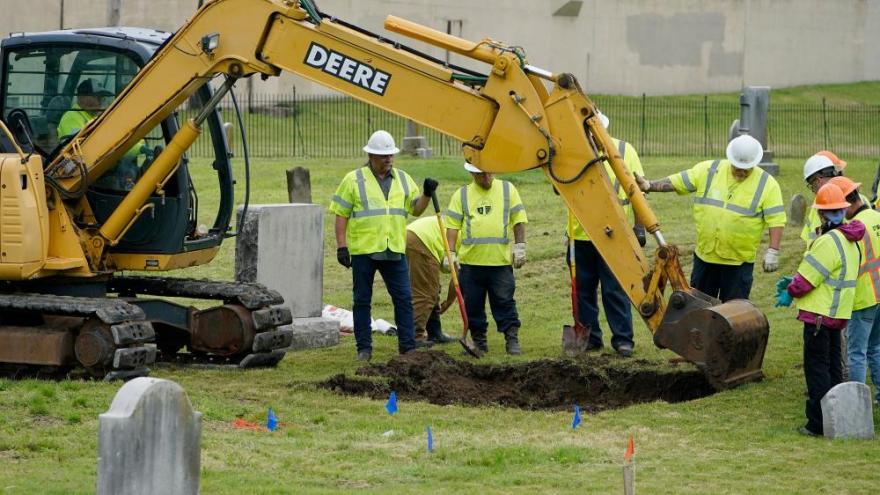 Excavation begins anew at Oaklawn Cemetery in a search for victims of the Tulsa race massacre believed to be buried in a mass grave on June 1 in Tulsa, Okla.

(CNN) -- There are now 27 graves that have been uncovered at an excavation site for the remains of those killed in the 1921 Tulsa Race Massacre at Oaklawn Cemetery.

That is 15 new burials since the 12 that were uncovered in October, according to Oklahoma state archaeologist Kary Stackelbeck.

The work in the excavation has switched from using backhoes to remove the soil above the coffins to using smaller hand tools. A team from Cardno Inc., an environmental and infrastructure company, is at Oaklawn Cemetery to complete the exhumation process.

"But now, we're at this point where we're doing the hand excavations, this is where Cardno's team is using smaller hand tools to remove the soil from on top of, and then around, the skeletal remains that are contained within those coffins, and then they will be documented in place," Stackelbeck said.

Stackelbeck expects that more graves will be uncovered as the excavation moves west, but says that some of these deaths may be associated with the 1918-1919 flu pandemic.

"So we have to remain cautious and not get too ahead of ourselves in terms of our interpretations. So we're working with our multiple hypotheses about what can explain the presence of a mass grave," she said, adding that the graves from the massacre is "absolutely still a possible scenario."

The excavation is expected to take weeks longer, Stackelbeck said, because they don't know how many graves hey will find.

Once the bodies are exhumed, the city and its public oversight committee will determine the next steps for "storing remains, DNA testing and genealogical research, and commemorating the gravesites and honoring the remains," said a city news release.

The work — which will unfold behind a screening fence with researchers, cultural monitors, historians, morticians, a forensic anthropologist and a videographer — may take months, the city says. That's not counting the efforts to identify the bodies and determine if they are indeed victims of the massacre.